It’s Hard To Be A Priest In America, Spread Thinner Than Ever

I’ve got more popebloggery at FiveThirtyEight, this time, looking at Pope Francis’s guidance to his brother bishops on pastoral care, and how the demographics of American Catholicism make his call hard to live up to:

In his final exhortation to his brother bishops in Washington, Pope Francis urged them to find ways to encourage the spiritual growth of priests, “lest they yield to the temptation to become notaries and bureaucrats, but instead reflect the motherhood of the church, which gives birth to and raises her sons and daughters.” He added: “Train them to be ready to stop, care for, soothe, lift up and assist those who, by chance, find themselves stripped of all they thought they had.”

But in the American Roman Catholic Church, a priest trying to live up to the pope’s vision is in for a lot of sleepless nights. According toresearch by the Center for Applied Research in the Apostolate (CARA) at Georgetown University, there are more than 2,600 Catholic parishioners for every diocesan priest.1 When CARA began keeping statistics in 1965, priests’ workload was only half as large — 1,289 parishioners per priest.

It was a particular pleasure to hear the Pope’s homily when he prayed with the bishops, because it closely echoed a passage that stuck with me from Open Mind, Faithful Heart:

The people are demanding in matters that relate to religion.  Just as they are generally faithful in fulfilling their promises, so they expect those who are responsible for providing pastoral care to be faithful in fulfilling their duties.  The priest does not belong to himself.  He may sometimes try to escape to other things, but all those “other things” count for little in comparison with the mother who makes him walk many blocks to bless her house.

I love how Francis emphasizes the mundane, mildly annoying acts as service as at the core of a vocation of love.

September 23, 2015
How Do You Quantify the Francis Effect?
Next Post 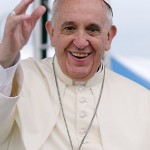 September 28, 2015 Pope Francis Retold Our American History
Recent Comments
0 | Leave a Comment
"Back to Square 1 ... ¯\_(ツ)_/¯Season 3!G.657BW.CO/d5573Y"
Bobby Klein My Good Catch Catches Them All
"We all are meme thiefes here 😂🙃fM.9226B.US/fA5573BU"
VanguardAI Books on deck for me for ..."
"To understand an art, you must understand phynomena."
Unlcuky13 I’m speaking about my conversion in ..."
"Despite the differences in level, it's still an excellent manga.pt.2632W.US/U5573xM"
Pilzkeks Dissecting the Catholic Vote for FiveThirtyEight
Browse Our Archives
Related posts from Unequally Yoked