Catherine Addington has a great piece up today at The American Conservative on the way Pope Francis spoke to American Catholics, and emphasized how our American identity can be a gift we bring to the church:

In his remarks to Pope Francis at Independence Hall, Archbishop Charles Chaput of Philadelphia name-dropped Alexander Hamilton in praising the contributions of immigrants to the nation’s civic fabric. It may have been a coincidence that Hamilton was mentioned just as so many people are discovering his story for the first time through the popular musical, but it’s wildly appropriate. Hamilton tells the story of the unlikeliest Founding Father using hip-hop and rap, a cast almost entirely composed of people of color, and a lens on the American Revolution that portrays the war as a gritty struggle rather than a fated victory for liberty. It tells an old story in new voices, and in so doing it enables people who have often felt excluded from the narrative of American history to feel it is their birthright. It shows Americans of color that the traditions of their nation belong to them, and what it looks like when they say so.

Pope Francis is doing something similar for American Catholics. He is telling an old story (his politics, however vaguely controversial their stylistic expression, are unsurprisingly traditional and his preaching is about two thousand years old) but throughout his visit he made a point of using new voices—American voices. He canonized an American saint, recalled American heroes, enjoyed American music and American liturgy, and exalted American ingenuity and uniqueness. His visit showed American Catholics what it looks like to be rooted in both of their traditions, and make that visible. Francis does for Catholicism what Lin-Manuel Miranda, the creator of Hamilton, does for American history: he invites a new audience to take part.

I was thinking along similar lines when I was covering the papal visit for DeSales Media, and wrote about Pope Francis’s address to Congress:

When Pope Francis spoke to Congress, he did so in his dual roles as a foreign head of state and as a spiritual leader. It would have been easy for him to encounter the same skepticism that Bibi Netanyahu did during his own address — as someone foreign, whose goals weren’t necessarily aligned with our own, who was getting a high profile chance to lobby our government. Especially with a bill to defund Planned Parenthood pending in Congress, it wasn’t clear if Pope Francis would wind up making a list of legislative demands.

Instead, Francis acknowledged himself as an outsider, and took the opportunity to tell us how he understood our country through the lives of four of our citizens: Abraham Lincoln, Martin Luther King Jr., Dorothy Day, and Thomas Merton.

Instead of offering a lecture, he presented our own history to us as a gift, an invitation to see ourselves through his eyes and to join in his awe and delight in what our people have been and what each of us could be.  As he narrated the lives of these four extraordinary people, he showed how each reflected the Gospel story of love of neighbor and self-gift.

September 24, 2015
It's Hard To Be A Priest In America, Spread Thinner Than Ever
Next Post 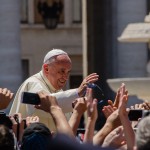 September 29, 2015 Praying With Strangers, Now That The Pope's Gone
Recent Comments
0 | Leave a Comment
Browse Our Archives
get the latest from
Catholic
Sign up for our newsletter
POPULAR AT PATHEOS Catholic
1

It Begins With Wine at a...
Steel Magnificat
Related posts from Unequally Yoked