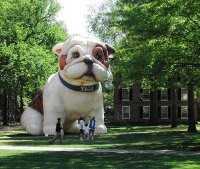 The last post I wrote about parts of my ethics that my friends label as ‘Christian,’ several commenters wrote in to take issue with the idea that Christians had a monopoly on that strand of moral thought.  I thought I’d run another example by you all, since my resolution to a  recent dilemma had my atheist friends snickering and saying, “You are such a Catholic!”

So here’s the situation: My university is in the middle of the drive for the Senior Class Gift and plenty of students disagree about whether anyone should contribute to our school’s large endowment, rather than any one of a number of worthwhile groups.  At some schools (luckily not ours this year), the whole thing becomes an exercise in poisonous social coercion, since there are bounties for full participation.

When the student assigned to badger me showed up in my room, I was frustrated and a little angry.  While I was arguing with her, I knew I was feeling spiteful and very proud of the principled stand I was taking.  I was in the kind of mood that builds into grudges, and I didn’t want to stay that way, so I gave the minimum donation and then donated $20 to Doctors Without Borders, to make up for the misspent money.

I still think the drive is a bad idea, and prone to abuse, but, in the moment, I was the one behaving badly (even though I was behaving politely to the person I spoke to).  It was worth donating to nip my spite and pride in the bud.  But when I told my friends I donated to avoid “holding anger in my heart,” again with the “So when are you converting?” cracks.

It’s obviously easy to summarize the situation in a Catholic framework: my pride in a small righteousness was leading me to sin against a classmate in my heart, but I think the principle works in an atheist framework of virtue ethics.  Do other atheists agree?

February 23, 2011 I'm under the weather
Recent Comments
11 Comments | Leave a Comment
"Jesus wasn’t resurrected as a great miracle simply in order to convince people to believe ..."
John The Two-Lazarus Problem
"The cartoon is amusing, but flawed. One of the four virtues of Stoicism is Justice; ..."
Vulpes Inculta 7QT: Stoicism Man, Semi-Imaginary Money, and ..."
"Do You Know what isn't Fair? Calling Atheism a Religion. Or saying Dawkins is a ..."
skwills Who Gets to Give the Courtier’s ..."
"Oh! And you can get there via Naval Gazing.(probably not by Navel Gazing...)"
TheSparksFlyUpward Too Sucky To Be True
Browse Our Archives
get the latest from
Catholic
Sign up for our newsletter
POPULAR AT PATHEOS Catholic
1