Time for a Few Facts 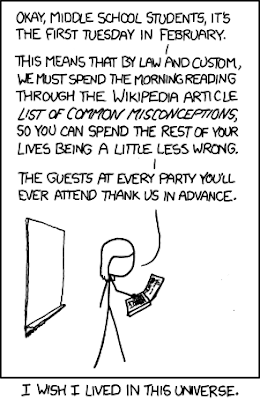 Ok.  I’ve been reading through the swiftly growing comment threads about Catholic doctrine relating to the Eucharist (part of this series on P.Z. Myers and sacrilege) and plenty of points have been settled to my satisfaction.  It’s been clear that plenty of atheists don’t understand the theology of transubstantiation in detail (understandable, since it’s not that relevant to our lives), but I think anyone who advocates sacrilege should do a little due diligence on the ideas they’re blaspheming.  This post is a quick sum-up of the ideas that emerged as common misconceptions about Catholic thought.  Many thanks to Charles, dbp, and Sister Spitfire for going into detail in the threads.  If I’ve misrepresented anything below, let me know

Is the Eucharist made of actual flesh?  If transubstantiation is true, can I extract Jesus’s DNA from it?

No.  There’s no test an atheist could perform on an unconsecrated wafer that would be capable of differentiating it from a consecrated wafer that had been transubstantiated.  But pointing this out to a Catholic or doing any of the relevant experiments is not a disproof of their theology.  The Church doesn’t teach or expect that anyone could detect the difference using scientific means.

If it’s indistinguishable by all physical tests, then what’s the change when it’s consecrated?

The Church teaches that the accident (the form of bread) remains the same while the essence changed from that of bread to the real presence of Jesus Christ.  It’s not a physical change, so if you’re an atheist and a total materialist, that last sentence probably made no sense, since you don’t recognize essence as a valid category with any connection to the real world.  If you’re a Catholic and a materialist, you have some serious problems with either your metaphysics or your theology.  If you’re me, and you lean towards dualism when it comes to human beings, this idea is understandable, could be reasonable, but I don’t see any compelling reason to believe it.

Well, how does all that changing of essence stuff work?

I don’t have the foggiest idea.  And most Catholics don’t either.  But, as far as I can tell, this is not regarded as a problem in Catholic theology.  Asking how the Host is consecrated is not like asking how an engine runs but more like asking how the Son of God became man.  It doesn’t operate in the same world of physical causes that we’re used to doing all our reasoning in.

Doesn’t this all sound a little like invisible dragon logic (see link)?

Yeah, a bit.  Once you start talking about a theology that has no physical consequences, it’s reasonable to be suspicious that someone sacrificed relevance for consistency.  Atheists can’t attack these beliefs, if nothing empirically testable follows from them.  Catholics do claim supporting data in anecdotal experiences of people who experience Christ’s presence in the Eucharist.  This kind of claim gets really messy, really fast.

To start with, there are all the normal problems of self-reports coupled with the fact that only people who believe Catholic doctrine are eligible to receive the Eucharist and undergo these experiences.  From the outside, it’s pretty much impossible to figure out whether the Catholic or the atheistic explanation better fits the anecdotal data.

I know my boyfriend is happier and healthier when he takes Communion regularly.  Receiving the Host during the Mass definitely seems to bring him a kind of unique peace.  Is that because he is accepting the grace of Jesus Christ or because he wrongly believes he is, and draws comfort and strength from that belief throughout the week?  I can’t settle the question on any smaller scale that discussing the truth or falsity of all of Catholicism.

(P.S. The invisible dragon analogy is originally by Carl Sagan, but I found it for the first time in the excellent story Harry Potter and the Methods of Rationality, which is written by the author of the essay linked above)

But either way, the Catholics are really having a cannibalistic feast, right?

No.  Even the most die-hard materialist ought to be able to imagine thinking like an Aristotelian and realize that consuming body and blood in essence is different enough from consuming them in physical form that it’s probably wrong to talk about them the same way.  It’s certainly true that Catholics have thought of Communion as fundamentally different from cannibalism throughout the history of their faith as the below quote from Aquinas demonstrates”

“I answer that, It is evident to sense that all the accidents of the bread and wine remain after the consecration. And this is reasonably done by Divine providence. First of all, because it is not customary, but horrible, for men to eat human flesh, and to drink blood. And therefore Christ’s flesh and blood are set before us to be partaken of under the species of those things which are the more commonly used by men, namely, bread and wine. Secondly, lest this sacrament might be derided by unbelievers, if we were to eat our Lord under His own species. Thirdly, that while we receive our Lord’s body and blood invisibly, this may redound to the merit of faith.”

My quasi-dualism doesn’t put me on firm enough ground with regard to essences to really analogize them to any physical behaviors, and I doubt the materialists will do better.  I’m inclined to say that tie-goes-to-the-people-who-actually-think-in-this-framework.

Courtier’s reply not withstanding, getting into arguments with religious people about doctrine is probably a mistake if you don’t know anything about doctrine.  Christians have had 2000 years to argue with us and with each other, so, regardless of whether their beliefs are true, the obviously dumb or contradictory bits of theology would be expected to be fixed or cleverly rationalized.  At this point, it’s certainly not going to be felled by an argument about cannibalism.

February 13, 2011 "I was born and bred in a paradox patch!"
Recent Comments
24 Comments | Leave a Comment
"I'd love to see a video of how it works. keranique shampoo reviews"
Marlene Garza Welcome Camels with Hammers to Patheos!
"Logismoi (the plural of logismos) are a fairly simple concept; they are whispers from either ..."
Rob, Portland Logismoi, Vampires, and Other Intrusive Thoughts
"I imagine I’ll do a lot more reading and pick a lot more fights over ..."
Donalbain A little about the queer stuff
"You are part of a search and rescue for lost Catholics.Regular updates to the countdown ..."
Edward Palamar I’m keynoting at a Con for ..."
Browse Our Archives
Follow Us!