Don’t Hand Weapons to Your Enemies 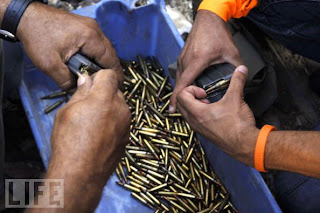 It didn’t take very long into the comment thread of my post critiquing nasty atheists for someone to lob the ‘accommodationist’ charge at me.  So let’s get a few things straight: I don’t think religion and atheism are compatible (with the exeptions of some extremely boring religions)..  And, on either side, the stakes of being wrong are high enough that there’s little use in papering over the differences or agreeing to disagree.  If you want to sort out the truth, I think that goal is best served by respectful rhetoric.

That doesn’t mean bending over backwards or avoiding stating how strongly you disagree, but it does require you couch your very potent arguments in milder language.  One ought to avoid insulting and needlessly inflammatory phrases or stunts.  If you want to learn from and convince your interlocutor, you need to actually address them with respect.

But suppose you’re not interested in any of that.  You know you’re right, so your conversation isn’t meant to be an open discussion; it’s a no-holds barred battle for dominance.  The only goal is to win.  Atheists do end up in these debates as well as the more pleasant/productive conversations like the ones I seek out on my blog.  My contention is, even when you’re settling down for a knockdown, drag-out fight, it’s still better to be respectful.

I’ve done a fair amount of debating at school, and one of my guidelines when writing a speech is “Don’t hand weapons to the enemy.”  Most of my opponent’s strength will come from capitalizing on my mistakes, so I can’t afford to make any.  If you think, as John Loftus does, that believers will look for any excuse to avoid giving up their false beliefs, why would you give them an easy out?  Why would you let your opponent think that your behavior didn’t merit a response or that your feelings stemmed from spleen instead of logic?  Nastiness and contempt are self-defeating in debate.

There’s almost always an audience beyond your sparring partner, especially on the internet.  When Andy went toe-to-toe with JoAnna in the comment thread, his choice of language shaped the impression everyone got of him and his ideas.  Labeling JoAnna’s choice to raise her children Catholic as child abuse in your first comment, as Andy did, is a terrible way to begin a conversation.

Plenty of the Catholics who were visiting these posts from Jen’s blog at Conversion Diary had clearly been turned off from discussions with atheists after exposure to people like PZ Meyers of Pharyngula.  His aggressive behavior gave them license to avoid debates with nonbelievers.  Poor conduct by some atheists means all the rest of us get treated with suspicion when we try to engage in discussions or debates.

If you want, you can complain about how unfair it is that I would expect atheists to unilaterally behave better no matter how rude or foolish the other side.  But atheists should relish the power we have in our choice of language.  In a debate, my opponent might come up with any number of facts or tricks to wrong-foot me; I can’t perfectly control or predict their maneuvers.  The only thing I can use to hem them in is my own speech and conduct.  I can’t do anything that will discredit my arguments in the eyes of my opponent or the broader audience.  If my goal is to win, I shouldn’t do my enemy any favors.

March 27, 2011 Don't Take Me Literally!
Recent Comments
24 Comments | Leave a Comment
"Jesus wasn’t resurrected as a great miracle simply in order to convince people to believe ..."
John The Two-Lazarus Problem
"The cartoon is amusing, but flawed. One of the four virtues of Stoicism is Justice; ..."
Vulpes Inculta 7QT: Stoicism Man, Semi-Imaginary Money, and ..."
"Do You Know what isn't Fair? Calling Atheism a Religion. Or saying Dawkins is a ..."
skwills Who Gets to Give the Courtier’s ..."
"Oh! And you can get there via Naval Gazing.(probably not by Navel Gazing...)"
TheSparksFlyUpward Too Sucky To Be True
Browse Our Archives
get the latest from
Catholic
Sign up for our newsletter
POPULAR AT PATHEOS Catholic
1