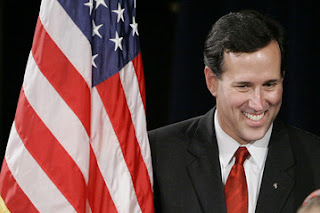 With so many reasons to oppose Rick Santorum’s candidacy, I’m disappointed at the justification offered by one commenter at The Daily Dish.  S/he wrote:

This is only a half-formed idea, but as I watched Santorum engage the Penn State students, I couldn’t help but wonder if candidate Santorum is really bad for Catholics. He seems to be suggesting that he’s been persecuted for his dogmatic following of the Church’s teachings. Nevermind that a thinking person and someone trying to be the leader of the free world should be able to construct personal values that differ from a wider belief system and still participate in that belief system, but isn’t he just reinforcing the problem that American voters have always had with Catholic candidates? [emphasis added]

Sullivan sums this up a worry that Santorum will be “tak[ing] calls from the Pope in the Oval Office.”  There are a lot of public policy issues where I wouldn’t like to see the Catholic Church win out, but this particular criticism seems strange.

The commenter seems to be going after Santorum for a lack of intellectual legwork.  Surely, if he’d come to his own decisions, he wouldn’t be wholly in agreement with any institution.  He’d be his own man, a leader, a maverick.  If the fact that Santorum’s agreement with the Church in all his positions is a liability, should I like him better if he deviated on one, no matter the form of his deviation?  Obviously not.

No one should get points simple for not matching a preexisting mold.  What I care about is the results of his positions, not whether they accord with a third party checklist.  This kind of rhetoric is a way to slam the beliefs of an opponent without actually having to explain your critique.  It’s just a faux-high minded iteration of normal political sniping.

If you believe Santorum is actually following the instructions of the Church without reflection, and you do not believe the Church is an inspired institution, Santorum will inevitably be led into error, which you can then attack on its merits.  Don’t talk vaguely about how agreement and loyalty betray a lack of critical thinking, prove it by showing his policy positions (however he arrived at them) are insupportable by anyone with data and a lick of common sense.

I’ve seen this trick of attacking people for agreement instead of the merits of the thing agreed upon used by other pundits and commenters, and I think it’s lazy and low.  Well, I suppose it would be an appropriate line of critique if what these people really fear is that the Pope is going to give Santorum mutable and unpredictable marching orders, creating a whole new kind of regulatory uncertainty.  Maybe they should try lobbying the US Chamber of Congress to take up their cause.

P.S. Of course, most of these concerns are moot, since there’s not a snowball’s chance Santorum will win the nomination.  As proof beyond the polling numbers: I went googling for a Santorum-related political cartoon related to his faith and found almost bupkis.  Looks like the cartoonists, if not the pundits, know a dead campaign when they see one.

September 5, 2011 Happy Labor Day!
Recent Comments
4 Comments | Leave a Comment
Browse Our Archives
get the latest from
Catholic
Sign up for our newsletter
POPULAR AT PATHEOS Catholic
1