Is Civil Marriage a Right? 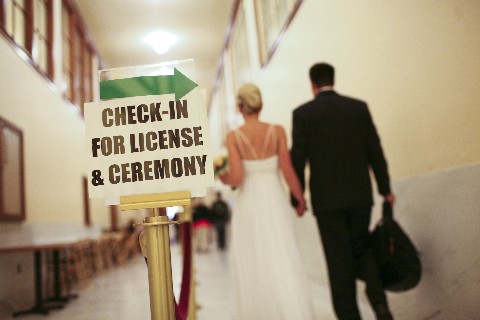 Last week the European Court of Human Rights ruled that same-sex marriage is not a human right guaranteed by the European Convention on Human Rights. In addition, according to The Daily Mail’s write-up of the case, the court ruled that if gay couples are allowed to marry, any church that offers weddings will be guilty of discrimination if it declines to marry same-sex couples.

Before I get to the main point, I have to say that last part struck me as bizarre. There’s not a Catholic church in the country that would consent to marry me to another atheist, whatever the gender. There are a number of prerequisites for sacramental marriages, and I have no idea why civil same-sex marriage would obligate the Church to officiate anymore than civil marriage for divorcees would obligate the Church to marry people in the absence of an annulment. Either there’s something missing from the Mail’s analysis, or the court just created a huge and under-reported constraint on religious liberty.

That worry aside, when I read the article, I realized I wasn’t certain whether I thought civil marriage (for any gender pairing) really ought to be considered a human right.  I guess a big part of the question comes down to whether you think marriage comes out of our right to freely contract with others and have the State enforce those contracts.  In that case, the State has an obligation to recognize and enforce the bond we create between ourselves and individuals, but it has no duty to single out a particular kind of contract as ‘marriage.’

This wouldn’t mean the State couldn’t acknowledge marriage in law, in the tax code, etc, or that it wouldn’t be prudent to do so.  It only means that it doesn’t have to and that, in the absence of the State’s involvement or blessing, people can conduct themselves as they wish.  People can get recognition of their commitment to a spouse from a church, from their family, or from their community at large.

The ‘officialness’ of the marriage would be enforced by whatever  constraints the couple chose to be subject to at the beginning of the marriage.  Essentially, everyone would be picking from a menu of covenant marriages, where the restrictions were enforced either by contract or by social opprobrium.

I don’t know that I have any major objections to this libertarian model of marriage.  I’d like for people to have more freedom to specify who gets to visit them in the hospital, who gets to inherit, and who has joint custody of their children irrespective of whether that person is a romantic partner.

That’s obviously not the system we have, and I think most of the litigation about gay marriage has nothing to do with inalienable human rights.  The government can have an interest in marriage regardless of human rights, insofar as the regulation and recognition of marriage is an opportunity for soft paternalism, so the question isn’t whether government should be involved. The legal question (at least in the US) is, once the govenment is involved, is it allowed to make a category that deliberately excludes a protected class.

What I’d like to know is whether you all think the government’s involvement in marriage is a matter of prudent social engineering or of moral obligation.

April 1, 2012 Upon this ROC I will build...
Recent Comments
118 Comments | Leave a Comment
Browse Our Archives
get the latest from
Catholic
Sign up for our newsletter
POPULAR AT PATHEOS Catholic
1