Won’t Someone Think of the Children?

Won’t Someone Think of the Children? March 14, 2012 Leah Libresco 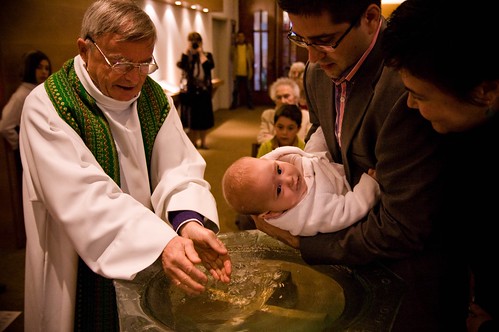 I was talking about posthumous Mormon baptism in an interfaith discussion group (I don’t object to it, see here: “The Mormons Try for a Mitzvah“), and someone asked why many of us have a strong, knee-jerk objection to proxy baptism of the dead, but don’t see anything odd about baptizing children.

In both cases, you’re inducting someone who cannot consent, and Christian baptism of the living (a sacrament of initiation that makes a seal that cannot be broken) is arguably a lot more intrusive than baptism of the dead (which is just supposed to allow them to convert in the afterlife, if they want to). At any rate, both involve trying to define someone’s identity.

For this reason, Richard Dawkins claims it’s abuse to raise children in a religion, or to talk about ‘Catholic children’ or ‘Jewish children.’ One should only say ‘children raised by Catholics’ until the kids are old enough to decide for themselves.

I don’t think this is a particularly useful framework. Parents can’t (and shouldn’t) raise children in a vacuum. Not just because they’d suffocate, but because it’s hard to teach anyone moral reasoning or epistemology totally in the abstract, divorced from its conclusions.  You can’t  teach a way of reasoning or questioning without giving some examples of right answers and explaining how you recognize them as correct.

The objection to baptism or religious education is just a particular case of the general objection to parents passing on false beliefs and biases to their children. And there’s not a perfect solution to this instantiation of problem any more than there’s a good way to make sure that parents don’t raise their children sexist.  Telling them not to ever talk about gender would not be a solution.

You can put up some safeguards against blatant emotional abuse, but any restrictions (cultural or legal) strong enough to deter parents who are just miseducating their kids with the best of intentions are going to completely undermine the institution of the family.  Parents should want their kids to grow up loving the Good and the True.  It’s not worth waging war on that expectation just because many parents have a skewed idea of how to get there.

So my least-bad solution is still just public school.  I can’t (and shouldn’t) stop parents from having wrong beliefs they genuinely want to pass on, but I can try and make it possible for the kids to know that some people disagree early on and get a chance to get pitched by the other side before they start thinking of those incorrect beliefs as essential parts of their identity.  To do this properly, the public schools should do more problem-solving and critical thinking work and less NCLB-mandated testing drills, but now we’re reforming education, not families.

March 16, 2012 7 Quick Takes (3/16/12)
Recent Comments
20 Comments | Leave a Comment
"Jesus wasn’t resurrected as a great miracle simply in order to convince people to believe ..."
John The Two-Lazarus Problem
"The cartoon is amusing, but flawed. One of the four virtues of Stoicism is Justice; ..."
Vulpes Inculta 7QT: Stoicism Man, Semi-Imaginary Money, and ..."
"Do You Know what isn't Fair? Calling Atheism a Religion. Or saying Dawkins is a ..."
skwills Who Gets to Give the Courtier’s ..."
"Oh! And you can get there via Naval Gazing.(probably not by Navel Gazing...)"
TheSparksFlyUpward Too Sucky To Be True
Browse Our Archives
get the latest from
Catholic
Sign up for our newsletter
POPULAR AT PATHEOS Catholic
1