The Sin of Inconvenience

I’d like to highlight a couple comments from the quite long thread on Babies on a Plane! My original intent wasn’t to shame people for being bothered by screaming babies. There are few people who enjoy the sound of a human in distress (of any age), and we would be a little concerned about someone who was unmoved or pleased to hear someone cry.  My objection wasn’t to the NYT letter writer being uncomfortable, but the tone of entitlement in her note that suggested the presence of a baby was an aberration that she should be defended from.  Perhaps not what she meant to convey, but (unluckily) some commenters made took up that argument a little more pointedly.

Perhaps parents should be expected to withdraw themselves from adult company (and yes, the gender dynamics that invariably follow are problematic). But it was your choice to have a child (well, again, assuming it was your choice to have the child), you should live with the consequences. People with the flu are expected to stay home, and they didn’t even chose that state of affairs about themselves. If you chose to be bound to a screaming and inconveniencing organism, you should also be choosing to sequester yourself until that organism stops being so inconveniencing.

What I have found is, though almost every parish I visit has a nursery for babies and toddlers, parents insist on bringing children who won’t behave into Mass. Children below the age of reason are not bound to attend Mass. If you need to bring a toy to occupy your child during Mass that child should probably not be there. Conversely I have seen very young children both at Catholic Mass, but more often at Protestant services, who are quiet, attentive and reverent. One reason for that is that they understand what is happening is important. The other is that there parents will not stand for them to behave in any other way.

Generally speaking if your child can be made to behave in a nursery school storytime, at a movie, or during any other activity they can be made to behave at Mass. If they can’t, because they are simply too young either leave them in the nursery or do what my friends family dose and attend two different Masses, so that one parent can stay home with the very young children.

I don’t disagree with Anon and TerryC are correct that babies are disruptive, but where we part ways is our expectation of how calm and controlled public life should be.  I like having  little kids at Mass (there was a rambunctious toddler at my baptism who yelled ‘Yay!’ after each person was confirmed).  But even when they’re less adorable in their interjections, I like having them there because babies and children are a part of life, even for people who don’t have their own, and it would seem strange to me to have them excluded from people gathering together to form the Body of Christ.

I don’t claim that anything so sacramental is happening on an airplane, naturally, but it does seem strange to expect that this part of our life and community should be kept out of our way.  It’s bad for the parents, who are isolated, but it seems far from salutary for everyone else to have a norm of kids being mostly invisible, unless you’re in one of their spaces, like a playground.

I appreciated Broken Whole’s analysis of the conversation:

When I’m at home, and need quiet work space, I try to control my environment.  But, although I don’t like to deplete willpower carelessly, the main thing I want to have control over is not my surroundings but my reaction to them.  I can arrange to make people less of a burden on me (or, more often, scrupulous try to avoid asking anything of anyone else), but I’d rather be able to welcome connections to others, and stop trying to parse encounters according to which of us inconvenienced the other.

C.S. Lewis opens The Weight of the World with:

If you asked twenty good men to-day what they thought the highest of the virtues, nineteen of them would reply, Unselfishness. But if you asked almost any of the great Christians of old he would have replied, Love. You see what has happened? A negative term has been substituted for a positive, and this is of more than philological importance. The negative ideal of Unselfishness carries with it the suggestion not primarily of securing good things for others, but of going without them ourselves, as if our abstinence and not their happiness was the important point.

Unselfishness is a kind of training virtue.  It can help you work up to Love, but isn’t really the same.  It’s a useful heuristic while you’re growing, but you eventually grow beyond it.  But being around babies and other people who can’t be polite and unselfish and reserved yet can be a nice way to take off the training wheels. 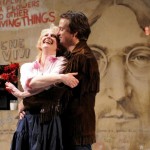 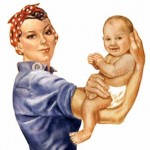 April 24, 2013 Pardon me, are you using that education?
Recent Comments
51 Comments | Leave a Comment
Browse Our Archives
get the latest from
Catholic
Sign up for our newsletter
POPULAR AT PATHEOS Catholic
1