On Palm Sunday, Blood Will Have Blood

On Palm Sunday in Catholic churches, the Passion narrative is read aloud.  The whole congregation is on our feet while the priest reads the part of Christ, and two lectors pitch in.  One of them handles the descriptions and narration and the other takes on the parts of each person who speaks along (Peter, Pilate, etc).  The lines spoken by the crowd are assigned to the laity all together.

And our lines are mostly brutal.

We are the ones who have to call for Christ’s death, all saying in unison, “Crucify him” when Pilate asks us to show mercy.  The Passion narrative is a reminder that we are all complicit in Christ’s suffering and death, since every time we turn away from the natural love we show to one another, we are confirming the need for Him to die by expressing the cruelty we require Him to heal.

But one of the ugliest lines in the readings seemed to have a kind of hope hidden within it:

Lector: When Pilate saw that he was not succeeding at all, but that a riot was breaking out instead, he took water and washed his hands in the sight of the crowd, saying,

Voice: I am innocent of this man’s blood.  Look to it yourselves.

Lector: And the whole people said in reply

Parishioners: His blood be upon us and upon our children.

When we got up to this bloody-minded passage, I was struck by the fact that, not long after the reading, His blood would be upon us in the form of the Eucharist.  Nearly all of the lines spoken by the crowd are brutal, but this one is also prophetic, and indicates that God’s mercy can be stronger than the hatred of people.  His blood returns to us, not to dirty our hands but to cleanse them of the stain that “all the perfumes of Arabia will not sweeten.”

I’m used to stories where people regret having their wishes granted, whether it’s Into the Woods or Rosamund Hodge’s Cruel Beauty or Trickster tales or fairy tales that haven’t been bowdlerized (especially Russian ones).  But here, for once, a hateful wish is turned into a channel for grace, in the ultimate example of returning blessings for curses.

After Good Friday, Christ descends to harrow Hell on Holy Saturday, but the work has already begun here, where he listens to us in our brokenness and answers the prayer within our prayer.  If we want blood, he will give it to us, but he will change it within Himself so that it may be a path out of violence, instead of the fruits of fear and hatred.

The crowd assembled before Pilate and the crowd assembled on Sunday before the altar might all steal Lady Macbeth’s line and marvel together, “Yet who would have thought the old man to have had so much blood in him?”  In Christ, there is enough blood to cover these people. preserved in history. and us, their children.

The mystery of Christ is not just that He is good, since that kind of goes with the territory of being God, but that he finds ways to meet us even where we are our most ugly, wicked, or broken.  I can’t help but be reminded of the children’s book The Runaway Bunny where even as the little bunny plans to run away, his mother tells him how she will always be with him.

“I’ll become a fish in a trout stream, and I will swim away from you.”

“If you become a fish in a trout stream,” said his mother, “I will become a fisherman and I will fish for you.”

If we are determined to steep ourselves in blood, Christ will offer us “A fountain filled with blood / Drawn from Immanuel’s veins / And sinners plunged beneath that flood /Lose all their guilty stains.”  No matter how much we plunge ourself into evil, He will come to meet us there, and offer us a chance to say “Amen” to him and be led out of the darkness we thought we wanted. 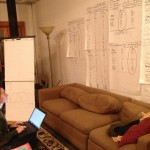 April 16, 2014 The Epistemological Peril of Punching Down
Recent Comments
0 | Leave a Comment
Browse Our Archives
Follow Us!