Keeping the Past a Foreign Country

Keeping the Past a Foreign Country May 6, 2014 Leah Libresco

At The American Conservative today, I’m discussing a new method of recording oral histories that would let museum curators tweak the words and even the facial expressions of the interviewee long after they have died.  For now, the goal is to make oral histories responsive and interactive–giving viewers the chance to ask the hologram questions and have a computer pick the right clip on the fly, so it feels like a conversation.  The pilot test is being done with Pinchas Gutter, a Holocaust survivor.

There’s a virtue in the distance that visible signs of age and moments of cultural incomprehension force upon us. A student who feels the frustration of not being able to ask Gutter a follow-up question is reminded that he is lost. Another visitor, who has to painstakingly rephrase a question, until it’s in a form the real Gutter would have understood must imagine herself in his position instead of finding him pre-adjusted to suit her own.

The false fluency afforded by the hologram doesn’t just distort Gutter’s own story, but the art of history itself. Historians are translators, and just like the translators of novels, they are aware that their reconstructive work is often slightly speculative or relies on a least-bad approximation of whatever actually happened. A translation that appears completely seamless makes us forget that we’re hearing about history secondhand.

Read the rest at The American Conservative…

May 5, 2014
Two Years Until Patheos Hits the Age of Reason
Next Post 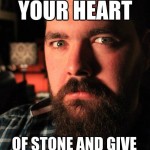 May 7, 2014 The Wrong Kind of Resilience [Pope Francis Bookclub]
Recent Comments
1 Comment | Leave a Comment
"Oh! And you can get there via Naval Gazing.(probably not by Navel Gazing...)"
TheSparksFlyUpward Too Sucky To Be True
"Hello, Deiseach!1. This is not an ad. (It always reassures me when someone says that!! ..."
TheSparksFlyUpward Too Sucky To Be True
""Do you honestly think that a child raised by a woman has no exposure to ..."
Zorin 2012 Queer Blogathon [Index Post]
"I'd love to see a video of how it works. keranique shampoo reviews"
Marlene Garza Welcome Camels with Hammers to Patheos!
Browse Our Archives
get the latest from
Catholic
Sign up for our newsletter
POPULAR AT PATHEOS Catholic
1