The Merry Merchant and the Sad Antonio

The Merry Merchant and the Sad Antonio June 15, 2014 Leah Libresco

Last night, I had the pleasure of seeing the closing night performance of The Merchant of Venice, staged by The Shakespeare Forum.  It was a delightful production, and the cast did a great job making all the jokes (and there are many) land effectively, without undercutting the heartbreaking trial scene (I cried).  The humor of the background characters set apart the two antagonists, Shylock and Antonio, who are some of the only characters who never laughed joyfully.

What struck me most about this production were the parallels between Shylock and Antonio and the ways they both cling to the bond that binds them, many of which I had never noticed before. At the beginning of the play, Antonio is commiserating with his friends, who are trying to raise his spirits.  Antonio (Dominic Comperatore) opens the play with the following speech:

In sooth, I know not why I am so sad:
It wearies me; you say it wearies you;
But how I caught it, found it, or came by it,
What stuff ’tis made of, whereof it is born,
I am to learn;
And such a want-wit sadness makes of me,
That I have much ado to know myself.

I’ve seen productions where Antonio’s sadness is transient, lifted by Bassanio’s (Bill Coyne) entrance, but here, his melancholy lingered.  His love for Bassanio was genuine, but I believed Solanio (Lash Dooley), when he says of Antonio “I think he only loves the world for him [Bassanio]” and the statement didn’t seem just to point at the depth of Antonio’s love for Bassanio, but the weakness of his attachment to anything else in the world.

Shylock (Joseph Menino) is also presented to us as a man who has only one love (if not necessarily so noble a love as Antonio’s for Bassanio’s).  The only person we see him care for is his daughter Jessica (Imani Jade Powers), who steals away from him with her Christian lover, Lorenzo (Zach Libresco).  After she is gone, he can’t even mourn her openly (as a Jew who married a Gentile, she would have been treated as dead, her name unspoken).  Shylock walks the streets bewailing his ducats, the only part of his loss that he is allowed to weep for.

When Shylock and Antonio meet at the trial, they are the only two persons who urge speed upon the judge.  While bystanders plead and curse, both Shylock and Antonio seemed slightly lost, with nothing left in the world to give them their bearings but the bond that had brought them there.

When Portia (Hannah Rose Goalstone) asks Shylock to call a doctor, so that there may be some chance of saving Antonio once he has been mutilated, Shylock brushes her off with “Is it so nominated in the bond?  …I cannot find it, it is not in the bond.”  I’ve often seen this line delivered in a cruel, deliberate way; Shylock using the limits of the law to give him license to be savage.

But, here, the Shylock that appeared in court was still so bowed down by grief, that it felt like he was clinging to the letter of the bond not just as the instrument of revenge, but as a way to give shape to his own life.  Watching him, I felt as through Shylock was incapable of going beyond the letter of the law, because his grief for his daughter had robbed him of the energy and creativity to make his own choices and write his own lines.  I couldn’t imagine what he would do after murdering Antonio, and I doubted he could either.  The bond was the only thing still in motion after Jessica’s ‘death’ and, when it was gone, it seemed like there would be nothing left to animate Shylock.

Antonio seems to be moved by the same sense of gratitude to inevitability.  When he comforts Bassanio, he tells him that it is not so bad to die, considering the alternatives:

Grieve not that I am fallen to this for you;

Than is her custom: it is still her use

To let the wretched man outlive his wealth,

To view with hollow eye and wrinkled brow

An age of poverty; from which lingering penance

Of such misery doth she cut me off

In another show, I might ascribe this speech to a simple desire to comfort Bassanio, but Antonio’s sadness had been so pronounced, that I believed him to be speaking honestly.  Like Shylock, Antonio is closed off to hope, because he is closed off to choices.  After being bankrupted, he doesn’t seem to have the energy to live and improvise.  As he begs the court to pronounce the sentence and move on, it seems like the last comfort available to him is knowing what to do and doing it.  As he says in the first scene:

I hold the world but as the world, Gratiano;

A stage where every man must play a part,

And mine a sad one.

Antonio and Shylock both seemed to be united in preferring to have a role to play, even if it is an unpleasant one.  The court and Portia urged Shylock to free Antonio as an act of mercy, but, for both these men, freedom seemed like it would be received as cruelty.  Without hope to animate them, they could depend only on law and lines. 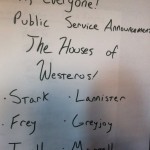 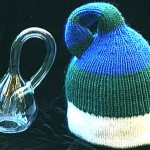 June 16, 2014 Prophets and Bottles that Breed Confusion [Pope Francis Bookclub]
Recent Comments
0 | Leave a Comment
Browse Our Archives
get the latest from
Catholic
Sign up for our newsletter
POPULAR AT PATHEOS Catholic
1