In this week’s chapter, Pope Francis contrasts Abraham with Lot, the latter too willing to cling to his present place and moment to follow the Lord where he leads.  In the course of his exegesis, he draws this distinction:

Those who set out on an exodus from themselves make a definite option: they prefer time to space.  They are betting on time, for time always opens onto the horizon of eternity; it knows nothing of “competition” for space.  But this journey in time is not without it hidden traps, for we sometimes camouflage space in the guise of time.  We believe that we are “on exodus” in the dimension of time, which is always God’s domain (what Blessed Peter Faber calls the “Messenger of God”), but we unwittingly create domains of possession.  That “great moment” we experience as something absolute and definitive is merely the result of our turning time into space.  God is not there,  We have settled down; it is our executive office disguised as the pilgrim’s trail… And since all reduction of realities is forced and violent, the space in which we travel as peers of the realm is nothing but a labyrinth.

As usual, I like my theology best in the form of topology analogies.  And I really like this paragraph because it helps to create a positive vision of what Christians often describe as death to self (and which is frequently muddled together with Buddhist non-attachment).  Here, the Christian is reluctant to hold too tightly to the present moment because she longs for something larger, not because she is systematically limiting her ability to desire.

When Pope Francis talks about the limited labyrinths we build, I naturally thought of a torus.  (Or, as it’s known in the non-topology world, a donut).  As you can see in the (slightly slow moving gif below) you can make a torus out of any finite, flat sheet.  You just join up one set of ends to make a cylinder, and then stitch the cylinder’s ends together to create the donut.  (Note, not how edible donuts are made).

A torus might feel infinite to someone living on it’s surface (like, say the protagonists of Sphereland) because you can walk and walk and never reach an edge, but it’s a very small kind of infinity, formed by just gluing all the edges of your original landscape together so that you don’t have to look at them.  But, once you construct the torus, your focus is on it, not the infinite space that it is embedded in.

When Christians interact with the world, it’s certainly permissible to love and delight in people, moments, and things — the thing to be on guard against is not any attachment but a false understanding of these small, constrained things as satisfying the love and desire for the transcendent that, Augustine says, makes our hearts restless until they rest in Thee.

I’m on day 6 of a Norbertine novena, in honor of my friend Michael Hannon, who just entered the abbey.  Please feel free to pray along. 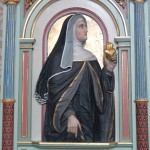 September 3, 2014 Plato Disappoints at the Googleplex
Recent Comments
0 | Leave a Comment
"Oh! And you can get there via Naval Gazing.(probably not by Navel Gazing...)"
TheSparksFlyUpward Too Sucky To Be True
"Hello, Deiseach!1. This is not an ad. (It always reassures me when someone says that!! ..."
TheSparksFlyUpward Too Sucky To Be True
""Do you honestly think that a child raised by a woman has no exposure to ..."
Zorin 2012 Queer Blogathon [Index Post]
"I'd love to see a video of how it works. keranique shampoo reviews"
Marlene Garza Welcome Camels with Hammers to Patheos!
Browse Our Archives
get the latest from
Catholic
Sign up for our newsletter
POPULAR AT PATHEOS Catholic
1