Positive Parenting and Pick Up Artistry

Libby Anne of the Patheos Atheist channel is one of my favorite people to read on parenting, and I really enjoyed her recent post “When Positive Parenting Doesn’t ‘Work'”  I’m pulling a longer quote and I still feel bad about chopping up her story, so just pop over and read the whole thing.

Simply put, here is a situation where I very badly wanted Bobby to sleep, and not a one of my positive parenting techniques was able to achieve that. And I thought about this, too, as I laid there trying to sleep while Bobby refused to. The reality is that parenting positively sometimes means you don’t get your desired end result.

I grew up with parents who emphasized obedience and relied heavily on corporal punishment. Were I following this same pattern, I would have told Bobby to lie still in the bed, and I would have hit him on the upper leg with my hand or with a paddle if he didn’t obey. He might have tested the boundaries once or twice, but ultimately he would have laid still and fallen asleep. I saw this happen plenty of times with my younger siblings as a kid. This is a case, then, where punitive parenting would have obtained my desired result but positive parenting did not.

And so as I laid there trying to sleep and prevented from doing so by Bobby’s happy playfulness, I asked myself just what was the goal, really. Because while my immediate goal was to get Bobby to sleep so that I could sleep to, my ultimate goal is (I think) twofold: First, to raise a child who is independent, fulfilled, and kind; and Second, to be kind, compassionate, and fair while doing so. In other words, integral to my parenting is an effort to model the virtues that (a) I hope my children will emulate and (b) I believe are ethically required.

If I have treated my child with compassion and caring and modeled kindness and understanding, I have succeeded. Period. Success is not measured by whether my child takes a nap when I want him to, or by whether he obeys my commands. It is measured by whether I am holding myself to my ethical standards in interacting with my children and teaching my children those ethical standards in turn (with an understanding, of course, of the various constraints and challenges of child development).

I really appreciate Libby’s reflection on what happens when you do everything right and the other person still doesn’t cooperate.  Especially because this post helps me put my finger on exactly what creeps me out so much about some of the rhetoric that floats around pick-up artist culture.  (I mean, aside from the explicitly contemptuous of women rhetoric, where it’s not so hard to ID the problem).

There’s a subset of discussion of dating that sounds like a request for cheat codes or algorithms.  It’s the kind of discussion I find myself in if I mention something that made me uncomfortable and am met with the question, “Ok, then what’s the thing the guy should have done so that you’d say yes to him?”

There’s a presumption that, from any given starting point of my feelings, there’s some route from there to the guy getting what he wants, and it’s just a question of me being a little more forthcoming about what my unlock code is.  (And, sometimes, that it’s a little unsporting of me to say “no” to some approach “A” given that there exists some working approach “X” and thus that I’m quibbling about the details, since I’m in theory ok with saying “yes”).

But, even when he’s treated well, Libby’s son Bobby isn’t obliged to fall asleep when he’s not tired, and even if people are pleasant, I’m not obliged to be amenable to romantic overtures.  The goodness of Libby’s approach (and of a hypothetical suitor) is aiming at respecting Bobby and me, and willing our good, not at inserting a crowbar into our will and producing the desired result. 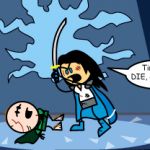 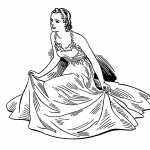 August 13, 2015 Is "Kindness-Adjacent" A Useful Category?
Recent Comments
0 | Leave a Comment
"Oh! And you can get there via Naval Gazing.(probably not by Navel Gazing...)"
TheSparksFlyUpward Too Sucky To Be True
"Hello, Deiseach!1. This is not an ad. (It always reassures me when someone says that!! ..."
TheSparksFlyUpward Too Sucky To Be True
""Do you honestly think that a child raised by a woman has no exposure to ..."
Zorin 2012 Queer Blogathon [Index Post]
"I'd love to see a video of how it works. keranique shampoo reviews"
Marlene Garza Welcome Camels with Hammers to Patheos!
Browse Our Archives
get the latest from
Catholic
Sign up for our newsletter
POPULAR AT PATHEOS Catholic
1