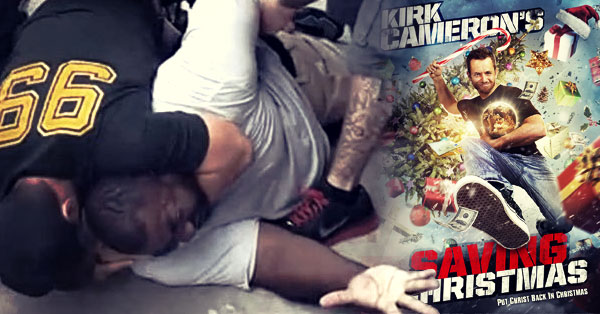 I feel sorry for the Fox-News War-On-Christmas crowd.

This is normally the season of the year when they foment anger and offense at perceived slights anytime a city renames a Christmas parade a “holiday parade” or anytime retailers dare to remain inclusive with Season’s Greetings banners.

For them, the failure of anyone to use the word Christmas amounts to a “war,” yet the actual gunning down of statistically large numbers of unarmed black men is no real cause for concern.

It is perhaps the greatest sign of privilege that those who continually parrot a narrative of “Christian persecution” based on nativity scenes and holiday cards will bend over backward to excuse the literal war – the actual systematic killing of civilians by increasingly militarized police forces – being waged on poor black communities in our own country.

So we should feel pity, I guess, for current events ruining their War On Christmas season. Kirk Cameron’s silly Saving Christmas has a dismal 1.3 stars on IMDB, and the exaggerated slights against the holy day have taken a backseat to protests over the latest round of grand jury decisions failing to indict white officers for killing unarmed black men. Jesus, a brown-skinned transient and known practitioner of civil disobedience executed by a brutal police state, is indeed perhaps the reason for the season, just not in the way the War on Christmas crowd wants to talk about.

Instead, many white conservatives, mostly Christians, have been trying their hardest to deny the mountain of evidence suggesting racial disparity in our policing and justice system, instead focusing on irrelevant things like “black-on-black murder,” which is no more an epidemic than white-on-white murder given our segregated society. Some Christians have even decided this is not a “skin problem” but a “sin problem,” a nod to their belief in the equal depravity of us all but a deflection from the real issues nonetheless, which do, in fact, have everything to do with skin color.

We literally have video of a police officer choking a black man to death. We literally have data from the FBI and hundreds of social scientists tracking the racial bias at work in society at large, much less in the policing and imprisonment of blacks. Yet those who will do mental gymnastics to deny the existence of any of this, and who will grouse about people playing the “race card” anytime it is pointed out, are often those who are first to perceive and decry “Christian persecution” for the most nominal of slights.

So while the war on blacks happens in actual reality that no one can deny – while the events of Ferguson, Mo., and Staten Island, N.Y., are real events that happened in real historical time and resulted in actual violent action leading to actual death – this is of apparently no concern to many conservative Christians, who instead are too busy hyperventilating about a false urban legend suggesting the Obamas have renamed the White House Tannenbaum a Holiday Tree. And while police have killed far more Americans recently than Ebola or Islamic terrorism, much less a fictional anti-Christ of varying identities, many Christians prefer to ignore these present realities and instead fantasize about some imminent Christian holocaust they’re sure is on the horizon.

Really, all I want for Christmas is for many of my fellow Christians to get real. If your biggest concern right now in this country is that the government or public at large is not adequately expressing your religion for you, then you have successfully embodied the very definition of privilege. 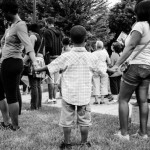 December 3, 2014
I'm a racist and you probably are too
Next Post

December 8, 2014 The Misuse of Scripture (Southern Baptists seem to lead the way)
Recent Comments
0 | Leave a Comment
"6 Bible results for "be kind":2 Chronicles 10:7They replied, “If you will be kind to ..."
Jim Jones Seven ways Christians blow it
"Uh...no?"
Tiny J Seven ways Christians blow it
"GOd came to save us from eternal separation from God by dying on a cross?Do ..."
Bones Did Jesus speak more about Hell ..."
"Eternal separation from God"
SPH Did Jesus speak more about Hell ..."
Browse Our Archives
get the latest from
Progressive Christian
Sign up for our newsletter
POPULAR AT PATHEOS Progressive Christian
1