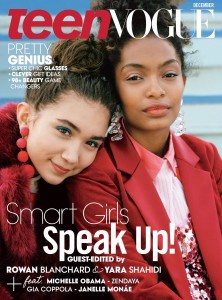 I recently wrote for Sojourners that those who see the upcoming presidency of Donald Trump as a threat to civil liberties and a setback in social progress will need to rise “from the margins, from the outside, from the ordinary moments of our lives.” Resistance is best activated from the bottom up, driven by those with less power, and centered by voices largely unheard.

Already, a month or so after the election, sprouts of resistance is rising (surprising some in mainstream media) just as I expected from a magazine dedicated to instructions on glitter nail polish application and tips for hiding acne scars: Teen Vogue. An op-ed written by Lauren Duca has gone viral, as she tells it like it is—“Donald Trump Is Gaslighting America.” The piece was excellent journalism, well researched, a scathing commentary that is both intelligent and interesting. And it is written for teen girls.

In addition to make up tips, Teen Vogue has also recently given voice to two young Native American girls who unveil the truth behind what’s been happening at the Dakota Access Pipeline construction, exposed abuse and exploitation of Amber Heard’s bisexuality, and continue to call Donald Trump out for his lies that climate change is not real.

A big part of the magic that is being delivered by Teen Vogue has been attributed, and rightly so, to the leadership of Elaine Welteroth, a young (29 year old) African American woman who became the editor-in-chief this May. It is unsurprising to me that the editorial voice from a black woman packs a strong, prophetic punch of journalism, because she has experienced the world from a much different perspective than the status quo. But also, it is important to remember that Teen Vogue is publishing these wide array of topics spanning from politics to pop culture to fashion, because it is a sound business decision. They are keeping a finger on the pulse of what teen girls are interested in and delivering pieces that satisfy their curiosities.

What is most subversive about this unlikely source of resistance isn’t just that they are calling out the emperor has no clothes, or, the President Elect blatantly lies, but that they include these commentaries right in the same publication that raise health and body image awareness, fashion, music, tech, and hair. The most radical thing about this new voice of clarity is that it comes from teen girls who understand the integrated relationship between politics and a girl’s body, mind, and soul. They are challenging Donald Trump, not as academic elites, or with empty rhetoric, but pouring out their resistance with their whole, embodied being. And that’s why it’s so powerful.

When we talk about raising children into gender equality here at Unfundamentalist Parenting, we consider the importance of teaching bodily consent, of dismantling toxic masculinity, and advocating for feminism as a family. But the best thing parents can do to strive for more equality in the world is to simply let their daughters work their own magic. Gender oppression has been socially constructed to keep girls’ voices down, their presence minimized, and their actions small. If, like brave activist Malala’s father says, we do not clip their wings, they will fly when they are ready to. And what the audience of Teen Vogue is telling us is that teen girls are ready to do what others have not been able to accomplish right now in this moment of history: to tell unflinching truth and lead the resistance for equality. “Donald Trump is our President now; it’s time to wake up,” Lauren Duca quips, or what the young people say, throws some serious shade.

The fact that the editorials of Teen Vogue bursting into the national media scene catches people by surprise witnesses to the cultural expectation that teen girls are not to be taken seriously. As if adolescent girls cannot do the hard work of managing their fast changing development while engaged in the affairs of the world. And yet, it is precisely their lack of recognition that gives them the edge in ushering forth a revolution—because resistance rises from the margins.

Picardi, Teen Rogue’s digital editorial director says in this Atlantic piece, “I think young people, and perhaps particularly young women are so wildly underestimated by the world at large…I want us to be a platform that challenges that idea.”

We all need to challenge that idea, and if it is true what Luca says, America has been so gaslit that the nation has become incapable of grasping reality—the white, male, grown-ups cannot be trusted right now. It is time to listen, learn, and center the voices of a new demographic: teen girls. 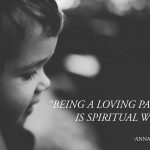 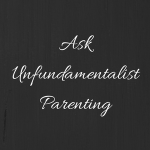 What is a Christian Response to...
FreedHearts
Related posts from Unfundamentalist Parenting