Robert Coles, a Harvard professor and student of children’s lives, sees “children as seekers, as young pilgrims well aware that life is a finite journey and as anxious to make sense of it as those of us who are farther along in the time allotted to us.”[i] Just as adults want to know the whats and whys and hows about life because they are human, so, too, do children want to know. Children want to know because they are just as human as adults are. They have the same burning curiosity that the rest of us do, though they sometimes express it in different ways because of their various developmental stages.[ii]

Existential questions are those big questions about life that all humans ask: Who am I? What is the meaning of life? What is my purpose here on earth? Is there a God? While we often think about these questions as ones that only the “professionals” answer—professionals like adult philosophers and theologians with PhDs and impressive research grants—all humans, whether highly educated or not, whether adult or child, wrestle with these questions. Yes, even children wrestle with them and try to come up with answers. In fact, researchers have found that people begin to “construct systematic belief and disbelief systems about the universe in which they live, including the natures of physical and social reality and God, by about four to six years of age.”[iii]

Bad things often provoke these big questions about life.[iv] Having to face the death of close relative or a beloved pet, for example, can prompt a child of even a young age to think about the edges of life—those edges where one goes from living to not living, being to not being.[v] Or an experience of pain can inspire a child to wonder: “What is the point of me suffering?” Godly Play founder Jerome Berryman says such moments or experiences bring about for children “an awareness of the existential limits to their being and their knowing.”[vi]

Coles writes about his experience in Boston in the 1950s as a pediatrician helping children who contracted polio. The disease made these children paralyzed and unable to breathe. They were consequently placed in giant respirators called “iron lungs.” Faced with the prospect of their conditions never improving, these children turned inwards, reflecting deeply on their lives and earnestly asking existential questions. “These are young people,” Coles says, “who suddenly have become quite a bit older; they are facing possible death, or serious limitation of their lives; and they will naturally stop and think about life, rather than just live it from day to day.”[vii]

Coles gives the example of Tony, an eleven-year-old boy who grew up Catholic. The boy was previously an athlete, playing football and basketball in his school. Now confined to an iron lung, Tony asked Coles: “Why me? How did this happen? What did I do? That’s all I do, ask these questions.” These big questions about life quickly became spiritual for Tony: “I ask: Ok, God, I must have done something to deserve this! Tell me!”[viii]

Though only eleven, Tony is adept at asking questions about the purpose of existence and the meaning of suffering. He is probing issues of theodicy—the “answer to the question of why God permits evil”[ix]—that adult theologians have wrestled with for centuries. And he reaches to his spiritual tradition to find answers: “I remember in Sunday school, we read of Job… He didn’t know what to make of it all, and I don’t either.”[x]

Coles notes that Tony’s “spirituality was, I think, evoked by the distinct possibility of death”—and that Tony’s brush with death led to him “giving himself over to questions our philosophers and theologians and novelists have asked over the centuries.” To put this another way: eleven-year-old children are capable of profound existential contemplation! As Coles says, “The discourse of children rivals that of Christian saints, such as Augustine and Teresa of Avila and St. John of the Cross.”[xi]

[ii] Jerome Berryman, Godly Play, Augsburg Books, 1995, p. x: “Children do not use adult language to speak of their encounters with the existential boundaries to life… This makes it all the more important for us to notice such issues in the lives of children and to give them religious language to name, value, and express their ultimate concerns so they can cope with them now and prepare for a more healthy and creative life later.”

[v] Ibid, p. 109: “For children, even those quite healthy and never before seriously sick, death has a powerful and continuing meaning.” 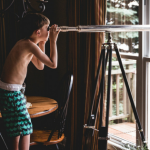 June 6, 2017
5 Things Therapy Training Taught me about Parenting
Next Post

June 14, 2017 Jesus as Child
Recent Comments
0 | Leave a Comment
"TW child abuse as someone who grew up in fundamentalist Christian spaces, I'm pretty sure ..."
Fiver Connolly No, John Piper, Kids Do Not ..."
"I will rather teach my kids not to read materials like this"
None Why Your Children do NOT Need ..."
"*by"
Eli C The Trouble with Easter: How To ..."
"Hey real quick, do you mind explaining to me how we could possibly be saved ..."
Eli C The Trouble with Easter: How To ..."
Browse Our Archives
Related posts from Unfundamentalist Parenting