The Excessive Miracle of the Virgin Birth (and Should We Believe it?)

This post is part of a special Patheos conversation: “Modern Magi on the Meaning of Christmas,” featuring myself, Scot McKnight, Nadia Bolz-Weber, and Billy Kangas.

Without fail, every Christmas morning Dad read us the “Christmas story” from the gospel of Luke. This doubled as an exercise in patience (and sanctification), since the cinnamon rolls and presents had to wait till after the good book was read. In that story of Jesus’ birth, Luke tells us that the birth of Jesus through Mary was special: “The Holy Spirit will come on you, and the power of the Most High will overshadow you.” Matthew’s version is even more explicit. There the angel explains to Joseph that “what is conceived in [Mary] is from the Holy Spirit.”

In all those years hearing the Christmas story, I never really thought to question the miracle of the virginal conception. It seemed such an integral and “natural” (though, quite super-natural) element of the story. The savior of the world comes into the world in a unique way–a way that transcends or even upends normal processes. This is not just the Messiah, this is the Son of God. Indeed, this is God, though now in human flesh, as the person of Jesus of Nazareth.

The Apostle’s Creed, one of the earliest and most ecumenical (universal) of Christian confessions states that Jesus Christ “was conceived by the power of the Holy Spirit and born of the Virgin Mary.” Christians all over the world confess this creed regularly and with great feeling during the Christmas season.

Karl Barth, a significant modern theologian, put the latter question this way: “When two theologians with apparently the same conviction confess the mystery of Christmas, do they mean the same thing by that mystery, if one acknowledges and confesses the Virgin birth to be the sign of the mystery while the other denies it as a mere externality or is ready to leave it an open question?” (Church Dogmatics, I.2., 179)

We could unpack the shades of meaning in that question–and consider whether there are other options than what he presents–but to whittle it down, he is asking whether confessing the “mystery of Christmas,” the incarnation of the Son of God, involves also confessing in a historical, though supernatural, virginal conception. That is, should we read the infancy narratives as in fact claiming that there was no human male (Joseph) involved in the conception of Jesus? This assumption was seemingly taken for granted by most early Christians and became inscribed into the creeds (from the Apostles’ through the Chalcedonian definition and forward). While originally it was emphasized to highlight the humanity of Jesus, it became a way of underscoring both his humanity and his divinity. Eventually it also became a way of protecting Jesus from “original sin” (we can thank Augustine for that), but that’s a story for another day.

Early Christians took the idea of the virginal conception of Jesus with utmost seriousness and they understood it to be a divine miracle, which actually took place).

In a Christmas sermon, Augustine noted that the virginal conception means that Jesus’ unique birth mirrored his unique identity: his dual natures as both divine and human complicated his parental origin (O’Collins, 294) He preached, 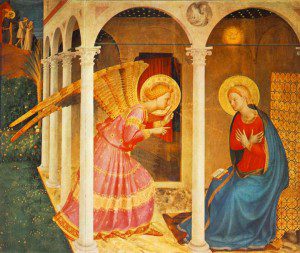 Conviction in the virgin birth developed in some very intriguingly speculative ways. Early theologians were reluctant to even imagine that the womb of Mary was altered in any way, by the sexual act and even by the birth itself. The apocryphal Ascension of Isaiah claimed that after the birth of Jesus, “her womb was found as it was before she became pregnant”; similarly, the Odes of Solomon said there was no “physical travail” involved in the birth of Jesus (see Kelly, 491-492). Emphasis on virginal purity also led to speculative, textually groundless doctrines regarding the “perpetual virginity” of Mary.

Nonetheless, I affirm that simply because early Christians believed something to be true or interpreted a text in a certain way, doesn’t require us to follow suit if there is good reason to take a different interpretation.

Plenty of contemporary theologians have rejected the “plain,” traditional reading of the virgin birth story, in favor of reading it as a legend with deep theological significance. Others have argued that to focus on the historical, or even biological details of the story, as if that’s what we should really take away from it, is to miss the point. Some have also argued that to accept the virgin birth at face value could be theologically detrimental.  Jürgen Moltmann, for example, argued that taking the virgin conception at face value could lead one to underestimate the complete humanity of Jesus. He suggested that a normal human birth, with two biological parents, might give us a better sense of Jesus’ full humanity.

Moltmann says of the biblical writers: “The narrator’s aim is not to report a gynaecoloigcal miracle. Their aim is to confess Jesus as the messianic Son of God and to point at the very beginning of his life to the divine origin of his person” (Moltmann, 82).

He rightly emphasizes the theological significance of the virgin birth account. This story tells us that Jesus is the unique Son of God who, as the resurrected Messiah, is able to overcome death and to bring about the salvation of the world. For Moltmann, the infancy narrative is really a story about the relation of Jesus Christ to the Holy Spirit, much more than it is about the biological nature of the birth itself. The Spirit, who is the real mother of Jesus, “creates,” bestowing life upon Jesus Christ, in a sense just as the Spirit bestows life upon the church today, and just as the Spirit continues to recreate and bring salvation into the world. The birth of Jesus was the entrance into the world of the unique Son of God who brings life and resurrection. Whether that happened biologically through virginal conception or through a “normal” conceptional process is, for Moltmann, quite beside the point.

But is it (beside the point)? Is a theology of Jesus Christ, a vision of the meaning of Christmas, unaffected by the question of whether the virgin birth really happened in space and time–in ‘real’ history? Karl Barth said, “No” (or, Nein, rather). For Barth, to relinquish conviction in the actual time and space occurrence of the virgin birth is to diminish the meaning of the Christmas mystery. The virgin birth story was, he thought, the “guard” at the “door of the mystery of Christmas.” (Church Dogmatics, I.2, 181). The virgin birth protected the revelation of the uniqueness of Christ, the divinity of Jesus, and of the divine initative of God in salvation.

Barth was convinced that the virgin birth and the resurrection account are like bookends of the miraculous life of Jesus; both accounts require faith in the revelation of God and both witness to the intervention and initiative of God to bring salvation to the world. As he put it,

The Virgin birth at the opening and the empty tomb at the close of Jesus’ life bear witness that this life is a fact marked off from all the rest of human life, and marked off in the first instance, not by our understanding or our interpretation, but by itself (Church Dogmatics, I.2., 183).

Barth did note, however, that the virgin birth is not an element of belief required for having faith. For Barth, God’s gift of grace in salvation is not contingent on ‘orthodox’ theological beliefs.

To sum up, for Moltmann, the infancy narrative is a legend with great theological meaning, whereas the virgin birth itself is a dispensable miracle account whose significance has nothing to do with biological mechanisms of reproduction. It offers, in itself, no key to the theology of Jesus, but is an interposition from later, post-resurrection, understandings of Jesus’ divine person. As he puts it, “The confession of faith in Jesus, the Son of God, the Lord, is independent of the virgin birth, and is not based on it.” For Moltmann, the infancy narrative tells us about the Spirit and Jesus in fellowship with the Father bringing salvation to the world. For Barth, on the other hand, the virgin birth is an indispensable miracle of God’s free grace, a miracle which ensures that the beginning of Christ’s story matches its ending–supernatural intervention, divine initiative, salvation.

So what about you? So what about me? I have gravitated over to the “progressive Christian channel” and away from the “evangelical” channel of Patheos, but not because of the virgin birth question. (I’ll explain more about my ‘migration’ another time).

When I consider Moltmann and Barth side by side on the question, in light of the larger backdrop of Christian tradition and biblical testimony, I side with Barth in affirming the actuality of the virginal conception of Jesus  in large part because I have no good reason not to believe it. Moltmann’s reasoning is compelling, but not quite convincing. And if you believe in the possibility of miracles, there is no de facto reason to deny that this miracle occurred, particularly since the unfolding of events in which it stands is so earth-shatteringly unique. The Catholic theologian Gerald O’Collins put it well: “When a pre-existent, divine person acquires a human nature, why could this not happen through a virginal conception” (O’Collins, 287)? If you believe in the supernatural, bodily resurrection why not also believe in the virginal conception? God comes out of death through a superlative divine intervention, and comes into earthly life through a superlative divine intervention. The beginning matches the end–though the end (the resurrection) exceeds it still.

Of course, one can believe that the “natural” process of normal biological conception, of a man and a woman, can also be a work of God’s infinite, providential grace. But the question here, it seems to me, is whether there are compelling enough reasons to move beyond “traditional” readings of the infancy narrative?

The enchantment of hearing the Christmas story as a child, replete with the miraculous intervention of God in time and space, is something I do not want to leave behind easily–though I would hope that I am willing to do so if some combination of theological, scientific, etc. reasons compelled me. For me, rather than a dispensable legend (even one replete with theological significance), the virginal conception stands at the front of the gospels as an excessive miracle–a lavish witness to the superlative nature of Christ as Messiah and Emmanuel, the one who is God and who lived among us, and we “saw his glory” (Jn 1:14).

December 16, 2014 A Manger with no Danger: Or, How Many More 'Slaughters of the Innocent' Do We Need?
Recent Comments
235 Comments | Leave a Comment
Browse Our Archives
Related posts from Unsystematic Theology