Reading the Virgin Birth as Legend (or Creative Hagiography)

One of the sources I found most useful as I researched for my book, A Complicated Pregnancy: Whether Mary Was a Virgin and Why It Matters, was a very thorough, informative, book on the subject by Andrew Lincoln: Born of a Virgin? Reconceiving Jesus in the Bible, Tradition, and Theology.

It was the weight of the arguments he presents in that book that tilted my own position in a different direction from whence I began my theological journey on the question.

He argues that the Gospel infanny narratives of Matthew and Luke (the only two places in the Bible that we have the story of the virgin birth of Jesus–or, in fact, any explicit reference to it at all), should be read in the context of a very common genre in the ancient world: biography of extraordinary figures, or “creative hagiography.”

This designation distinguishes Lincoln’s approach to the infancy narratives from other scholars, such as Marcus Borg (as he notes in the quote I’ll post below).

Extraordinary figures need an extroardinary origin story. As stories about such figures were told and retold, seemingly inevitably some kind of miraculous birth story would be added to their biographies. And, it’s apparent that the infancy narratives came significantly later than the already-circuluating stories about Jesus’s adult life, his teachings, and the passion narratives of his death and resurrection.

Whatever the similarities and the differences in content, the form and the type of material included in Matthew and Luke conform very closely indeed to what ancient hearers or readers would have expected to be told about the births of great figures. Setting the infancy stories in the context of ancient biographies, then, is more appropriate than designating them, with Borg and Crossan, as parables or parabolic (The First Christmas, 32-8). While the latter terms may help to show that the truth of the stories does not depend on their factuality, they too conveniently avoid issues of historicity and are counter-intuitive when applied to the birth narratives…It is invoking ancient biography with its ‘creative historiography’ that enables us to discern how far they have meaning that is not dependent on their factuality. (66)

Whatever conclusions are drawn about the status of the virginal conception of Jesus, this literary phenomenon is a datum that cannot be ignored. If Christology in the canonical Gospels comes through this medium of ancient biography and if the earliest parts of such biographies are particularly legendary, then, in determining the theological subject matter of the accounts of the virginal conception, interpretation needs to take seriously the form in which the truth about Jesus’ origins is disclosed. (67)

Another helpful text on this is Richard Horsely’s The Liberation of Christmas, in which he points out that the genre of legend lies somewhere between absolute historical factual reporting and mythology, which is usually disconnected from real-life historical events.

The infancy narratives, read as legend, suggest that something powerful happened when Jesus was born, and that the origin story of Jesus need not be disregarded as purely mythical, but nor need it be read as purely historical–corresponding to historical event in every way.

This creates breathing room for us to read the beginning of Jesus life through the lens of what his life was about–which is the liberation of people–not just from spiritual despair and spiritual death, but from the oppression of real-life historical forces of evil.

It also allows us to have a genuinely incarnational Christology. Jesus Christ can be understood to have been the en-fleshing of the divine Word, Logos, or Son of God: truly and completely a human being, one who dwelt among us as one of us, because he relinquished the prerogatives of divinity (Phil. 2:5-11). 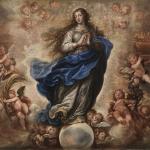 December 8, 2017
Why We Don't Need an Immaculate Conception
Next Post

December 22, 2017 Was Jesus Intersex or Was Mary?
Recent Comments
0 | Leave a Comment
Browse Our Archives
Related posts from Unsystematic Theology