The way the world turns out

The way the world turns out February 1, 2014 Dr. Steven Garber 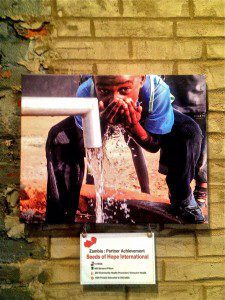 For love’s sake, to see oneself as responsible for the way the world turns out.

It must have been about ten years ago that I spoke at a college in the Midwest for a Veritas Forum event, and asked a question: can we know the world, and still love the world? I began with a story of our good friend Clydette Powell, a physician for U.S.A.I.D., who had been in our home for lunch the previous Sunday. On a rare day in Washington, the snow was falling in big snowflakes outside of our “peter pan” window, the fireplace was aglow, and the Christmas tree was still up. All so wonderful, and yet.

She had just come back from three months in Africa, assessing the impact of drought and famine on disease. “It was outrageous!” Again and again she told us of what she had seen and heard, and very good woman that she is, her best effort at making sense of it all was to say, “It was outrageous!”

I knew her well enough to know that she would climb back on the proverbial horse, and try again, flying off another week to another part of the world, stepping into the messes of history– and for love’s sake, taking responsibility for the way the world turned out. With unusual depth and passion, she incarnated what it meant to know the world and still love the world.

So in an address intended to engage the audience with harder questions, I took up the challenge of higher education itself, full as it is of the temptation to know more and more about less and less—or in Walker Percy’s best shot, “to get all A’s and still flunk life” –wondering if it was possible to find ways to learn that might form ways to live… doing justice, loving mercy, walking humbly with God?

After I finished, and the students had asked their last question, a group of guys ten years later in life were still there, with their own questions. We began talking, and I was intrigued by their intellectual and moral seriousness– they called themselves the Jars of Clay.

Over time we have become good friends, and have talked and talked. But this question began to thread its way through our friendship, and over the next year the Blood:Water Mission was born. How is it possible to honestly know the complex wounds of the world—the HIV/AIDS crisis in Africa, for example –and not simply, sadly decide to walk away?

From very humble hopes, the Blood:Water Mission has grown into very good work. It has not been glory upon glory; in fact it is truer now than when we first began: to honestly know and still love is the hardest thing in the world. This business of keeping at things that matter, because they matter, requires more than we imagine or expect.

But we have. Yesterday I spent a day in Nashville with the board, listening to reports, making decisions, going further up and further in to the needs of African people. Ever since we began, we have set forth the vision of “partnering with Africa to end the HIV/AIDS and water crises.” That has always made sense to me, believing as I do that “the secret of man is the secret of his responsibility.” At our best, none of us wants to be treated as unable; rather we see ourselves as people with dignity and freedom (no matter what B.F. Skinner argued to the contrary). We want to be responsible, because we want to be human.

In countries across the African continent, we have found good people to work with, digging wells, developing clinics, all with the hope of changing the way the world turns out.  http://www.bloodwatermission.com/

From the Washington Institute for Faith, Vocation, and Culture.

February 15, 2014 Vocation as sacramental and seamless
Recent Comments
0 | Leave a Comment
Browse Our Archives
get the latest from
Best of Patheos
Sign up for our newsletter
POPULAR AT PATHEOS Faith and Work
1

What is "The Gospel" in 1...
(re)integrate
Related posts from Visions of Vocation