It was my first time visiting Washington, D.C.  RAWtools had been there 3 years ago at the National Cathedral with the Children’s Defense Fund, but my son was about to be born so I gladly missed that one.  This time we were invited by my friend Shane Claiborne to be a part of a Death Penalty abolition event in partnership with Abolitionist Action Committee.   On Monday January 16th we accompanied an evening program hearing from “Voices of Experience” with various connections to the death penalty.  Family members of those on death row as well as family members of victims whose offender was on death row.  Derrickl Jamison – a death row exoneree who spent 20 years wrongfully on death row –  was finally released after DNA proved his innocence. But not before he saw 50 people walk to the death chamber and not come back.  Men he’d seen come in at 18 years old.

On January 17th many in attendance and others joined for an action at the supreme court.  18 would end up risking and being arrested for peaceful protest, they held a sign on the step of the supreme court that read, “STOP EXECUTIONS.” (READ THEIR STORIES HERE)  Those not risking arrest (about 100) stood on the sidewalk with signs for each year since the death penalty was reinstated with the names of those executed that year.  I held the year I was born. 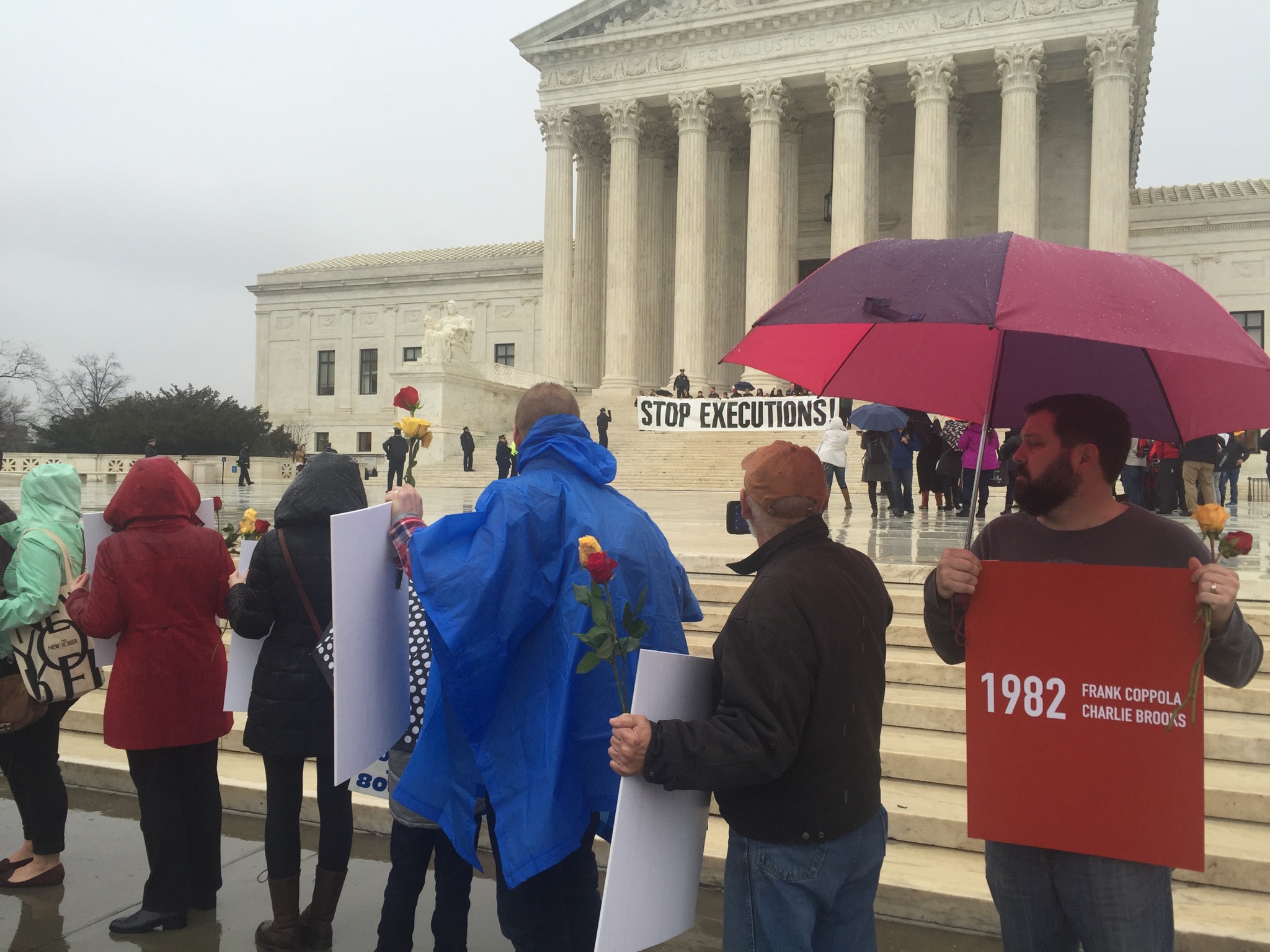 My dad, Fred, and I watching as the police begin to arrest those protesting on the steps of the supreme court

Why the connection to the death penalty?  One reason is the 40th anniversary of the execution by firing squad of Gary Gillmore, something he volunteered for.  We made a garden tool from a gun similar to that used in Gillmore’s execution.  The tool was given to Randy Gardner, whose brother was executed in 2010, also by firing squad. I also thought about Sharletta Evans a lot on this trip.  Her 3 year old son was killed in a drive by shooting by 3 teens under 16 years old.  In 2012, the average time spent on death row, between sentencing and execution, was just under 16 years.  17 years after her son died, Sharletta sat face to face with the man who killed her son and would later sit with the man who was the driver – as part of a Restorative Justice conference she volunteered for.  Sharletta now advocates for the parole of the man who pulled the trigger that killed her son.  He was sentenced to life in prison without parole, a virtual death sentence for a teen.  Had he been an adult, the death penalty would have been on the table.  I can’t help but think of what could have been a missed opportunity that changed Sharletta and the shooter’s life.  Forgiveness is possible in what seems the worst of situations.  Restorative Justice may not be for everyone, but it is victim based, and if a victim wants to talk to their offender, it helps if they are alive (surrogates are often used in situations too sensitive for face to face dialogue).  I’d also be remiss not to mention the change in the offender as a peaceful contributor to the community inside the prison. 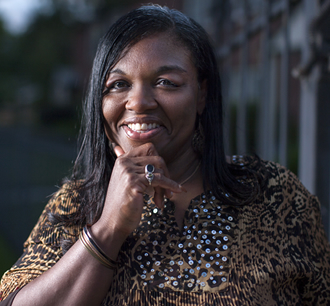 RAWtools was happy to support this action as the death penalty is a failure of our (moral) imagination.  Not just at the state and federal level, but in the church as well.  A common phrase and prayer uttered over the 2 days was, “Remember the victims, but not with more killing.”  If we show that killing is wrong, by killing, we justify its use as well as justify our imagination to allow it to be a tool of justice beyond the state level and into our communities in the form of “Stand Your Ground” laws as well as actions outside the law.  The death penalty is most common in the bible belt.  The death penalty is being used at its lowest rate in a long time.  More and more states are repealing it.  By repealing the death penalty, the nation would take one step closer to a plowshare and one step further from the sword. 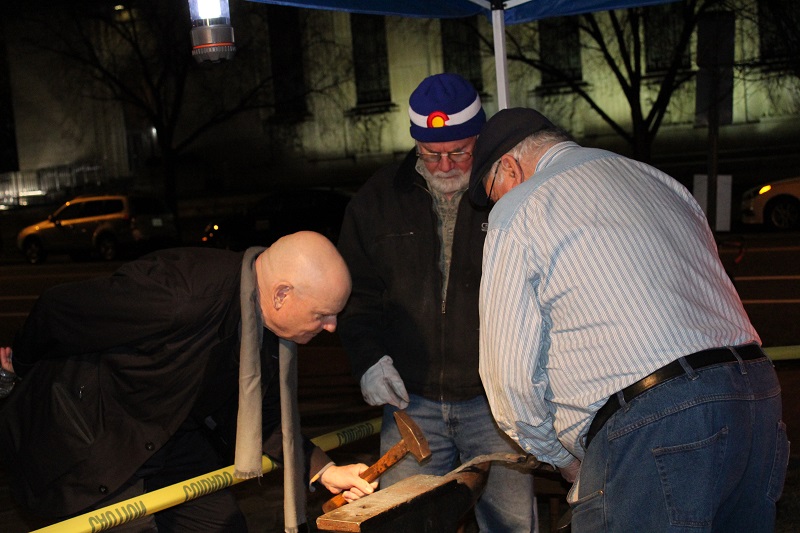 Sam Shepard takes a turn hitting a gun barrel. You know Sam’s dad as played by Harrison Ford in “The Fugitive” movie.

While taking in some of the memorials in DC, I couldn’t ignore an empire, memorialized on the national mall.  It was MLK day so we started at his memorial.  There were no columns or a roof surrounding the Rev. Dr. King.  His was hope come forth from despair, vulnerable to the elements and facing the capitol building at the other end of the Mall.  Next was the holocaust museum, a story we know too well.  It has a special exhibit, “Some were Neighbors: Collaboration and Complicity in the Holocaust.”  It told stories of those faced with the tough decision to comply by force, or run, ……or die.  From digging graves for Jews, to engineering the train to concentration camps, there were many levels of assistance the Nazis needed from the countries they invaded.  There were also many that complied, while saving as many as they could at their own risk. MLK Memorial. On its side it states, “Out of the mountain of despair, a stone of hope.”

Before we left town we visited the National Museum of the Native Indian.  On the 4th floor was the exhibit, “Nation to Nation: Treaties between the United States and American Indian Nations.  As you walk through you feel like you are in another holocaust museum.  Its a story of how the US ignored treaty after treaty and consistently removed natives from their land.

And here we are today, hearing from native Americans as an oil pipeline encroaches on their water supply, Black Lives Matter shedding light on systemic injustice on people of color, and a new president’s administration whose campaign ran on (in part) a border wall and the threat of a Muslim registry.  Have we learned anything?

The second leg of our trip took us to Penn State as part of their MLK week events with various student organizations, including 3rd Way Collective-whom we have worked with in the past.  We had an afternoon gun to garden tool demonstration that was followed by a talk from Dr. Drew Hart on systemic racism that flows in our institutionalized churches. Set up at Penn State

Dr. Hart closed with phrase he’s coined, “counter intuitive solidarity.”  He tells us about a tangible way forward.  White people came to the US and started a country by stealing it from the natives and building it with the bodies of African slaves.  We are not far from the civil rights era.  We can talk to people that felt it.  And more importantly, privileged people need to pursue solidarity with those not like us.  At times it will feel counter intuitive to a life built on privilege.  It will feel counter productive to talk to fellow white people, in a white community, about race.  But as Drew says, “That’s where all the action is!”  I love a story he tells in his book “Trouble I’ve Seen: Changing the Way the Church Views Racism.”  Drew is having lunch with a white friend who all of a sudden thinks of a metaphor to navigate the space of race.  He places his cup between them and explains that they both see the cup, but they can’t see each other’s side, so they need each other to share their perspective.  Drew then explains that as a minority, he already knows what the other side looks like.  He’s had to navigate white space his entire life.  He was the only black male on his dorm floor in college – he lived the other side of the cup.   A white person can go through life and know nothing about African American culture, but minorities have to learn another culture in order to survive.  This doesn’t make a white majority inherently bad or evil, but it does make it easy for a system to be established that does not foster relationship between people groups.  If you want to learn more about this, study how long money travels in white communities in your city vs. how long it travels in the minority communities in your city. Dr. Drew Hart taking a turn on the anvil.

After the prophets Micah and Isaiah tell of beating swords into plowshares, they talk about nations not lifting up swords against nation.  Today, we could translate “nation” into any categorical group of people that centers on race, class, gender, religion, political issues, or other descriptors that begin to separate.  To beat our swords into plowshares is to stop exploiting our differences and to start celebrating them.  Its to know that in the body of Christ, our hands will look, feel, and act differently than our feet.  We will only move away from a sword when we decide to melt it, opening our imagination to invest in alternatives to the sword that are not limited to a plowshare, but do contribute to the fruit of the spirit.  Things like restorative justice, community gardens, neighborhood economics, community resilience centers that help with trauma, block captains that build relationships with police departments, mixed income communities, and homeless shelters like the Community for Creative Nonviolence in Washington D.C. that offer space to activists coming to town to speak good news to an empire. Many in our group that protested the death penalty stayed in this shelter.  As Shane Claiborne calls it, “A beautiful melding of worlds.”  You spend the day in the throws of empire and spend the night among the homeless.  It kills your ego-self.  My white self became a minority in a place where I saw only people of color.

The shelters, community gardens, and our neighborhoods are begging for us to put our swords down.  Until we do, we’ll continue to use swords to exploit people groups, whole tribes and nations of people we see as “other.”  (The death penaltyis disproportionately used against minorities).  Plowshares are empowering and life giving, swords are overpowering and death dealing.  We are born into systems not of our making.  We get to choose the tools we use to navigate life.  We have a choice. 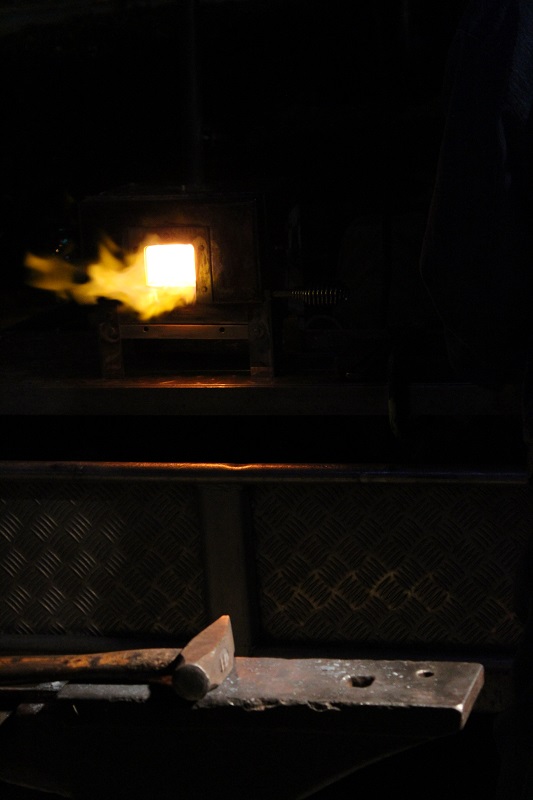 Have anvils, will travel.