If it’s weird, or gross, or gory, it must be Voodoo, right? Fox News Latino is reporting that Melissa Mark-Viverito, New York City councilwoman, is being sued in a 1 million dollar lawsuit alleging — you guessed it — Voodoo. The suit was filed by her political opponent, Gwen Goodwin, and concerns a mural of a bird’s head that was painted on the side of an East Harlem building. Goodwin is quoted in the NY Daily News as saying, “In the Caribbean culture this constituted a curse and a death threat.” She likens it to painting a swastika, or hanging a noose. I don’t have the rights to reproduce the picture here, but you can see it on the Daily News site above. The mural is not obviously one of a chicken, but what looks like to my anthropologist’s eye to be some kind of Central American bird, and while only the head is represented, it is depicted as shored up by scaffolding. I’m no art historian, but it seems to be a metaphor suggesting the transplanted people that came to this country are shoring up their new mixed community. (I would have travelled to take a picture of it myself, but it’s 9 degrees here, so unfortunately you readers will have to make do with the rubber chicken picture. Probably in poor taste, but these accusations are in poor taste too.)

Don’t get me wrong, hexes, or brujerias as they are referred to in Santeria or Lucumi practice, are not uncommon. Chickens, and other fowl are a part of New Orleans Voodoo, Haitian Vodou, and Santeria practices. If what Ms. Goodwin was alleging in the suit was a bloody chicken head or foot covered in urine or gunpowder on her doorstep, I’d say she had a problem. I’d probably also have some psychic advice for her. This extreme take on a mural to me seems to be blown way out of proportion, in essence “Ri-Cock-ulous.”

Voodoo takes the rap for everything, the Hollywood media is definitely partly to blame. Movies like Child’s Play and Serpent and the Rainbow perpetuate stereotypes and malicious falsehoods about this ancient religion. My picks for the worst offenders are in the post 10 Worst Voodoo Films of All Time.

In a way, however, the news media is even more responsible for the never ending misrepresentations. Viewers are supposed to understand the difference between fiction and non-fiction, and the news is supposed to at least attempt to present a slice of investigative truth. These stories are all too common however, and I’m left scratching my head. 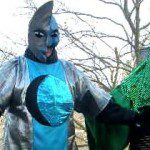 January 6, 2014
Vodou Serpent Simbi Slithers Between the Living and the Dead
Next Post 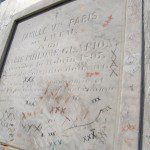