Voodoo Universe is very honored and proud to present the current installment of Divination Space Station with Orion Foxwood. Orion has been a friend for many years and is famous for being an author, witch , conjure-man, and faery seer.  Orion Foxwood is the author of “ The Faery Teachings”(RJ Stewart Books), “ The Tree of Enchantments” , and “ The Candle and the Crossroads’(Wiser Books), a DVD set (Pendraig Publications) called “Intro to Faery Seership” and a DVD called “An Introduction to Southern Conjure” (Pendraig Publications). He was born in the Shenandoah Valley of Virginia where he was first exposed to faith-healing, root-doctoring, and second sight practices of southern and Appalachian culture and has continued learning and teaching southern conjure and spirit-doctoring practices. He is the founder of House of Brigh Faery Seership Institute, a co-founder of Conjure Crossroads which hosts the annual Folk Magic Festival in New Orleans, and the founding Elder of Foxwood Temple, a coven dedicated to passing on the traditional witchcraft of his Elders. He lectures throughout the USA and Locations in the U.K. teaching southern conjure and Faery Seership with his spirit-wife Brigh. His website is Orionfoxwood.com and he can be reached on Facebook at Orion Foxwood.

When did you start divining?

My first divinatory tool was the Norse runes, which I read for nearly 10 years. I wanted to read the Tarot, but they were just too busy for the way my inner spirit works. Though I loved their beauty. I have been considering picking them up and trying now.

What method do you use most often now?

I use a method that I developed in partnership with my spirit wife in the Faery Seership tradition. They are called the “Vision Keys”. They are nine symbols carved on deer antler (because the deer is the Faery stag, and thus a messenger), which, after specific prayers are stated, I cast onto a reading cloth with three circles representing the under/ inner world, surface/ physical world and the upper/ transcendent world. I am the “human” originator of this system but will be teaching it to my Seership students in the near future.

How important is the question?

It is secondary to the throw. I usually recommend that we let the Vision Keys and the Spirit/ Spirits speak about what they want the person you are reading to know first. Then, after I have read, I ask them their questions. Usually, the throw answers their questions…or at least the ones they “should have asked”.

Do you have a yes/no method of divining you recommend?

Yes, I have two methods. I use a pendulum that belonged to my sister, who is an ancestor now and the person who introduced me to witchcraft. I also use four mercury head dimes (which is used in my conjure practices)

which were made in 1934, which is the birth date of my mother. My mother is significant in this read because she passed on the veil to me which gave me the second sight. I throw the coins after I have used a specific charm and then read the head/ tail patterns.

Is there any advice you have for newcomers when using divination?

Yes, work with your tool until it becomes like a dance partner. You begin to know its subtle moves and it works through yours. Always cleanse the tools and space before and after each reading and be sure to bless them through the spirit of some higher power (angelic, deific, ancestral, faery, orisa, loa or other). When you read, it is not only your psychic and intuitive gifts being employed, it is your ability to hear the subtle whisper of your helpful spirits, the spirits of the person you are reading, and the spiritual pattern of what is being read. 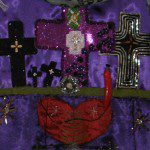 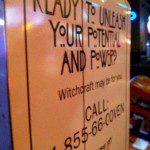 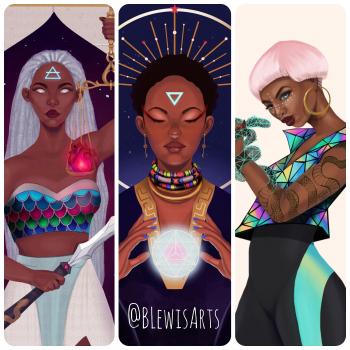 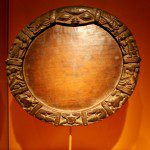 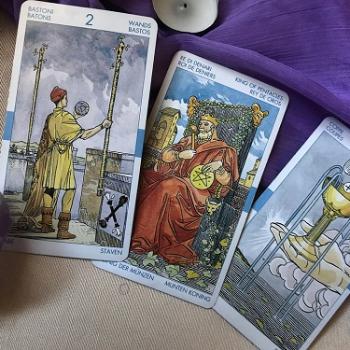