Lately everyone is all about the Warrior Women of Wakanda. The cunning and command that these females of Black Panther show us is truly inspiring. However, when people think of real “Amazon” warriors, women armed and ready to defend their territory, most often the group they are thinking of are the original warrior women of Dahomey. The UK based Sun writes ” Black Panther has been dubbed the superhero blockbuster of the year – and it’s got fans talking about what could have inspired the captivating script. Many are convinced the film’s Dora Milaje warriors are based on a real life all-woman army in Africa, known as the Ahosi of Dahomey, or the Dahomey Amazons. ” At their height they were said to have numbered over 6,000 Warrior Women (almost half of the nation’s army,) who were charged with defending their Kingdom.

Among themselves they were not called Amazons, but simply Ahosi, whch loosely translates to “women of the king.” An article on Cosmic Yoruba explains “Ahosi is [sometmes] translated to mean wife but according to Edna Bay, it is an amalgamation of “aho” which means “King” and “si” which is “dependant/subordinate” so it literally means a dependant of the King. This board category also included eunuchs, all ahosi were involved in the administration of Dahomey. Few ahosi ever became sexual partners of any monarch.” Renowned for their bravery and courage, they date back to the 1700s, and continued until Nawi, the last remaining survivor, perished in 1979, at over 100 years of age.

Originally, they didn’t serve the King at all, but instead were a brave group of women called Gbeto. These women were known for their success with elephant hunting. However as they militarized, these Warrior Women underwent some serious training. Consequently, descriptions sound like something out of a reality tv show. They spent extended periods of time in the jungle without supplies as a survival exercise. They were believed to have carried clubs, knives, and in later years rifles. Embodying the definition of fierce, they were said to mount the heads of their enemies on the ends of spears. Some even filed their teeth into sharp points. This reminds us of the Goddesses of other cultures.

The Warrior Women of Dahomey are a strong reminder of what the divine feminine is capable of. This is pure truth on both a small and a large scale. They are a real inspiration for Wakandans, and women everywhere.

May 8, 2018
Insights Of A Priestess In Publishing
Next Post 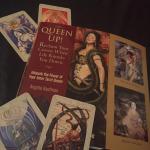 May 17, 2018 Divination Space Station: Angela Kaufman
Recent Comments
0 | Leave a Comment
"I too find it ironic. Her character even had a racial slur spewed at her, ..."
Amanda Ingalls Rachel True Speaks Out Against The ..."
"I love Miss Cleo! Thank you for bringing her forward again."
Brandy Williams Author The Lost Interviews Of Miss Cleo
"Wow I'm going to try it"
LaTonya Bowden Herbal Magick : Grab Some Five ..."
"If I said "Merry Witchmas", I'm pretty sure my sister would have a cow. As ..."
Amanda Ingalls Top 5 Witchmas Cookies To Make ..."
Browse Our Archives
Related posts from Voodoo Universe