The Little Mermaid: Like the Garden of Eden, Only Wetter 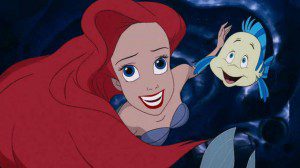 The Little Mermaid opened in theaters 25 years ago Monday (Nov. 17). It proved to be a pretty significant day in the annals of animated filmdom, marking not just the beginning of Disney’s fabled renaissance (Beauty and the Best, Aladdin and The Lion King followed hot on the Mermaid’s scaly heels) but also an unrivaled run of animated excellence across the industry. Mermaid’s artistic and commercial success helped lead to Toy Story and How to Train Your Dragon, Despicable Me and Frozen. Before The Little Mermaid, animated films were, really, cartoons—meant for kids and tolerated by adults. Mermaid reminded us that these things could be art, and contain a pretty powerful story, too.

Some don’t see it that way. Willa Paskin, writing for Vulture in 2011, said, “What’s most striking about The Little Mermaid now is that it’s a kids’ movie, but from a time before studios were even aware that parents would have to watch these things too.”

But truth is, The Little Mermaid was, and is, a story with crossover appeal: I was in college when it was released, and the thing was huge—so much so that many of my friends went en masse to see the thing. It’s a love story, a musical, and sometimes a campy delight. And it’s got some spiritual heft to it, too; perhaps unintentional, but still there.

Think of Ariel’s underwater world as a soggy sort of Garden of Eden.

It’s portrayed as a paradise—so much so that Triton’s head crab, Sebastian, can’t quite figure out why Ariel’s not completely satisfied with the place. In the deep theological treatise known as “Under the Sea,” he stresses that this underwater realm is completely free of worry and anxiety, pointing out that outside these watery walls things are much different: “Up on the shore they work all day/Out in the sun they slave away/While we devotin’/Full time to floatin’/Under the sea.”

He makes the whole of dry land sound a little cursed—almost like the curse that God laid on Adam back in Genesis 3:17-20: (“By the sweat of your brow you will eat your food until you return to the ground,” it reads in part.) 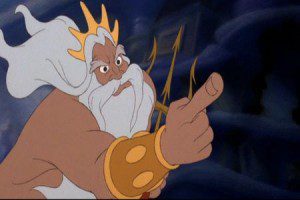 But Ariel is driven with a craving for forbidden knowledge—the knowledge of what’s outside this watery Eden. She collects terrestrial artifacts and eventually falls in love with someone who’s more comfortable topside, the handsome Prince Eric. Ariel’s father, King Triton (looking remarkably like Michelangelo’s version of God, if Michelangelo stuck a tail on Him) is, naturally, furious: The outside world is not for her, Triton insists. In fact, he forbids her from having anything to do with Eric or the drier world above.

So who comes along? Two very snake-like eels named Flotsam and Jetsam. They tell her that their boss, the Sea Witch Ursula can give Ariel what she wants: Access to the land above and, of course, Eric. Ariel can have that forbidden fruit she so desperately wants … if she only takes the bait—I mean, bite.

(Now, this takes on an deeper resonance when you consider Ursula’s origins. We don’t know much about her backstory, but she does mention that she used to “live at the palace” but has since been banished—”practically starving,” she complains. Her admission suggests a backstory that mirrors Lucifer’s own banishment from heaven. And let us not lose sight of the fact that Ursula, like Lucifer, collects poor, unfortunate souls.) 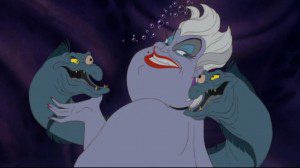 Here, the movie shifts slightly from Paradise Lost to Faust: Ursula promises to give Ariel everything she longs for in return for her voice. If Ariel can make Eric fall in love with her, then she gets to keep her legs. And if she can’t get that to happen in three days (another little biblical echo there), Ariel’s soul belongs to the sea witch.

Ariel gets her legs. Unable to stay underwater, she essentially casts herself out of the garden—and must go to a much drier, harsher world filled with (as Sebastian has warned us) pain, labor and fish-eaters.

Now, Disney doesn’t make this topside look all bad, of course. Eric’s palace isn’t exactly a sweat shop. But the fact remains that Ariel has been exiled from paradise to … somewhere else; another home that isn’t really her home. She’s a fallen mermaid, if you will. And when mermaids fall, they fall up—to an equally fallen world.

Ursula will make sure that Ariel will stay fallen. She plots and schemes and directly interferes with Ariel’s own designs until the third day’s up. There’s only one way, it seems, for Ariel to escape her fate as another soul in Ursula’s collection of them. Someone will have to take her place. And in a very New Testament twist, that someone is Ariel’s own godlike father, Triton. He gives his own life for that of his child … even though she got herself in trouble through her own disobedience.

Now, it’s here where this vaguely spiritual string of metaphors kinda breaks apart, what with Eric spearing Ursula’s midsection with a ship and all. But that doesn’t change the fact that The Little Mermaid is a story of redemption: Ariel doesn’t return to her watery paradise, but through grace and sacrifice, she’s no longer a completely fallen creature, either. She was saved, quite literally, and in the end finds happiness even in her fallen state, and as apart of a fallen world, because she knows her Daddy loves her—loves her enough to sacrifice everything for her.

I think it holds a little bit of water … don’t you? 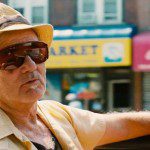 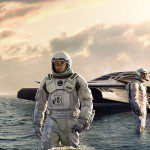