Seven Reasons Why We Need Mister Rogers More Than Ever

Seven Reasons Why We Need Mister Rogers More Than Ever June 6, 2018 Paul Asay

On Feb. 2, 1968—Groundhog Day—Simon & Garfunkel recorded the final version of their classic song “Mrs. Robinson” for their album Bookends. It includes one of the most poignant lines in all of pop music:

Where have you gone, Joe DiMaggio? Our nation turns its lonely eyes to you.

“I thought of him as an American hero and that genuine heroes were in short supply,” Paul Simon later told The New York Times. And indeed, in early 1968, they were. The country was mired in the Vietnam War. Protests raged at home. The country had never felt so divided, so angry. After the heroics of World War II and the unbridled American self-confidence of the 1950s, the United States must’ve felt like a stick bent to its breaking point, ready to splinter.

The country needed a hero.

Most folks didn’t know it yet, of course. Mister Rogers’ Neighborhood, featuring a rather un-telegenic, soft-spoken minister as its host, director, singer, writer and puppeteer, was meant for kids too young to tie their shoes, much less write think-pieces for The New Yorker. But as Focus Features’ new, wonderful documentary Won’t You Be My Neighbor (out in theaters beginning this weekend) illustrates, he was a good hero for those turbulent times. And, I think, the sort of hero we need more than ever.

Fred Rogers wasn’t a television novice when he launched Mister Rogers’ Neighborhood on NET (the forerunner to PBS) in 1968. He’d worked on a show called The Children’s Corner for Pittsburgh’s WQED years before, introducing Daniel Tiger when (according to the movie) one of the live show’s ancient film clips broke.

But if Daniel’s introduction to the world of television was a spontaneous thing, Mister Rogers’ Neighborhood was anything but. As Neighbor unpacks for us, Rogers carefully thought through every word and lyric, almost every moment, crafting a show that would never talk down to its young viewers but wrap an arm around them and talk to them. Rogers called the space between his cameras and his viewers’ televisions “holy ground,” and indeed something sacrosanct took place there.

When you contrast what Mister Rogers did back then with our own frenetic entertainment culture—heck, with our entire national climate—it’s striking to see the difference, and feel just what we’re lacking. Consider: 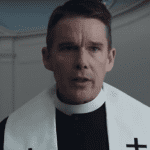 June 4, 2018
The Despair, Hope and Holy Activism of First Reformed
Next Post 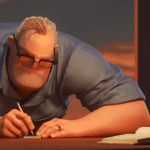 June 14, 2018 Incredibles 2's Incredible Message
Recent Comments
0 | Leave a Comment
Browse Our Archives
get the latest from
Watching God
Sign up for our newsletter
POPULAR AT PATHEOS Entertainment
1