The Green Knight Looks Intense. But Will It Retain the Original’s Spirituality?

The Green Knight Looks Intense. But Will It Retain the Original’s Spirituality? February 13, 2020 Paul Asay

The trailer for David Lowery’s intriguing-looking The Green Knight just dropped. Color me excited … and maybe just a bit nervous, too.

The movie is based on one of the most famous poems of the late Medieval age, Sir Gawain and the Green Knight. Hero Sir Gawain—played by Dev Patel—is a knight from King Arthur’s famed Round Table, on par with Lancelot and Galahad. In the poem, the mysterious Green Knight shows up at King Arthur’s castle on Christmas: He asks for one of the knights to strike him with an axe—as long as the attacker will allow the enigmatic knight to return the favor after a year and a day. Gawain accepts the challenge, and he decapitates the knight in one blow. The Green Knight picks up the head and walks out, telling Gawain to show up at the Green Chapel when he’s supposed to.

I’ve not read the poem since my college days, but the original work has been subject to scads of literary interpretation in the 700-some years since it was first penned. The reason it lands here, of course, is that the story’s steeped in Christian themes and symbols. Some smart literary types have interpreted the poem as a clash between Christianity and paganism, or a deeply religious and even apocalyptic work (where Gawain’s faith is tested to deem his worthiness to survive the coming cataclysm) to even a secret critique of the Medieval religiosity in vogue at the time.

The movie, of course, might not carry over any of those Christian themes at all. But David Lowery, who was behind the truly haunting A Ghost Story in 2017 (and whom I interviewed around the same time), was raised in a deeply Christian family. And while he no longer identifies with the faith, his work often shows a certain understanding and even empathy for spiritual themes. Lowery would be just one of a very small handful of directors that I feel could bring some intriguing spiritual moxie to a movie like this.

Plus, the whole trailer has a cool Del Toro-like vibe to it, does it not? I’m looking forward to seeing this. Too bad I have to wait ‘til summer. 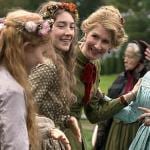 February 16, 2020 Doc 'We Believe in Dinosaurs' Highlights America's Faith/Science Divide
Recent Comments
0 | Leave a Comment
"Thanks, BrowserPhil ... so embarrassing. Aravis was from The Horse and His Boy, right?"
Paul Asay Narnia Comes to ‘The Falcon and ..."
"Please replace Aravis with Jadis. :-)"
BrowserPhil Narnia Comes to ‘The Falcon and ..."
"I know that the first film on this list not explicitly about Christian faith, Denis ..."
Robert Charles The 12 Best Non-Christian Christian Movies ..."
"The author, starts the article with a dismissive/arrogant affirmation unto all that are worthy to ..."
oscar deltoro ‘I’m Just Fascinated by It.’ Morgan ..."
Browse Our Archives
get the latest from
Watching God
Sign up for our newsletter
POPULAR AT PATHEOS Entertainment
1