I’m no scientist, but I do like science. I’m no pastor, but I do love God. And while I’m no young earth creationist, the Ark Encounter still looks pretty neat.

This is not to say the museum/proselytizing center/theme park doesn’t have its share of issues. This full-size ark in Williamstown, Kentucky, is filled with animatronic animals, people and dinosaurs, and naturally it’s packed with controversies, too: The documentary We Believe in Dinosaurs, airing on PBS Monday, Feb. 17, examines most of them.

First, there’s the Ark Encounter’s questionable science. Founder Ken Ham created this creationist theme park as a walk-through defense of one idea: That God created the universe just as Genesis said He did—in six literal days—that the earth (and its surrounding universe) is about 6,000 years old and that Noah brought along some dinosaurs on his ark. (Juvenile dinosaurs, the Encounter’s creators theorize. Hard to fit ‘em aboard otherwise.) It is, as molecular geneticist Georgia Purdom says in the film, a response to “the evolutionary fairytale.” propagated by most scientists.

But the primary point of contention isn’t its science, but its funding: The Ark Encounter received a sweetheart deal from the state of Kentucky to build the park there, including $18 million in tax breaks. That makes the Ark Encounter, and Kentucky’s financial support of it, pretty fascinating.

As a center specifically meant to push an explicitly Judeo-Christian understanding of creation itself—and a very narrow understanding at that—the Ark Encounter is unquestionably a religious organization, and you can understand why people would fight those tax breaks. Chris Caldwell, a pastor for a local Baptist church, says in the doc that he’s one of many “deeply religious people who are also deeply uncomfortable with those sorts of government benefits going for a religious purpose.”

But it’s also a tourist attraction—one that its backers drew more than 1 million people in its first year alone. You can see why even secular lawmakers in the struggling town of Williamstown might’ve been excited about the Ark Encounter coming to town. Business, after all, is business, and lots of businesspeople in Williamstown thought Ken Ham’s boat might carry economic salvation.

But even as the film delves into these and other issues, but We Believe in Dinosaurs is really about the people behind those issues—and some pretty likable people at that. Phelps, the geologist, thinks the Encounter is filled with pretty terrible science, but he comes across as reasonable. We’re introduced to Doug Henderson, who’s spent several years helping create some of the amazing sculptures and animatronics that the ark houses. He’s a talented, likable guy, and he comes across as far less militant than his boss, Ham. “I’m a normal person,” he says with a chuckle. “I am not crazy, but I do believe in all of this.”

David MacMillan serves as a bridge between those two worlds. He’s a former New Earth creationist who’s since abandoned those tenants, but he tries to help more secular folks understand the creationist mindset through his writing. That’s left him, at times, feeling a bit ostracized by those who say that he’s “attacking God.”

“That’s frustrating, because I’m a Christian!” he says.

That humanization of these issues is something we often miss—especially as they grow ever more strident and politicized. As much as creationism can feel like a front line in America’s Culture Wars, most folks aren’t fighting, even if they do take sides: They’re doing what they believe is right—pursuing what they perceive to be the truth.

Now, I don’t think that to be a Christian, you need to believe that the world is around 6,000 years old. I don’t believe Purdom when she says, “If we don’t take what the Bible says in one part as true, then it becomes a problem for the Rest of Scripture.” Because, of course, even the most fundamentalist Christian understands that lots of the Bible isn’t, word-for-word, literal. I can’t imagine, for instance, that Ken Ham believes that hail is kept in literal storehouses, as we’re told in Job 38, or that Jesus will be literally swinging a sharp sword from his mouth as Revelations says. The Bible is filled with poetry, turns of phrase, symbolism and flat-out fiction (in the forms of Jesus’ truth-telling parables), and Christians of all stripes are able to deal with those literary devices just fine.

I think planting the Christian flag on the hill of Young Earth creationism can be dangerous, especially when so much established science seems to refute it. If archeologists ever find the remnants of Noah’s ark on a mountain somewhere, I’ll be as happy as anyone. But my faith isn’t predicated on that. It’s rooted in the divinity and sacrifice of Jesus.

I think the power of Noah’s Ark goes well beyond its historicity. It’s a grand illustration of both God’s justice and His grace; of our own penchant to break God’s heart. It’s fired imaginations of anyone and everyone who hears it—including me, in fifth grade, when I designed an elaborate ark of my own (complete with a pool in the middle for the hippopotami).

I’ve always wanted to see the ark—to take in its God-given dimensions for myself. I think I’d be a lot like MacMillan, the former Young Earth creationist, as he walked toward Ham’s towering re-creation of the ark.

“I’m really, really excited,” he says as he walks toward the ark facsimile. “I don’t want to be, but I am.”

And no wonder. Whether Noah lived or not, his ark is still very relevant—and still pretty cool.

We Believe in Dinosaurs will air on most PBS stations Monday, Feb. 17.

February 13, 2020
The Green Knight Looks Intense. But Will It Retain the Original’s Spirituality?
Next Post 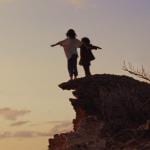 March 11, 2020 How the Movie 'Wendy' Shows How We’re Really Not of This World
Recent Comments
0 | Leave a Comment
"Thanks, BrowserPhil ... so embarrassing. Aravis was from The Horse and His Boy, right?"
Paul Asay Narnia Comes to ‘The Falcon and ..."
"Please replace Aravis with Jadis. :-)"
BrowserPhil Narnia Comes to ‘The Falcon and ..."
"I know that the first film on this list not explicitly about Christian faith, Denis ..."
Robert Charles The 12 Best Non-Christian Christian Movies ..."
"The author, starts the article with a dismissive/arrogant affirmation unto all that are worthy to ..."
oscar deltoro ‘I’m Just Fascinated by It.’ Morgan ..."
Browse Our Archives
get the latest from
Watching God
Sign up for our newsletter
POPULAR AT PATHEOS Entertainment
1