Warrior Poet, Columcille ~ Light of the North Who Brightened the West & Inflamed the East 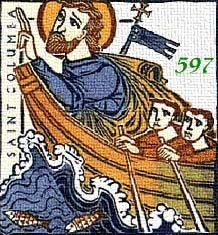 In sixth century Ireland approximately one third of the population were poets. As Saint Patrick died c. 493 another Irish champion was on the rise: Columcille (also known as Columba), whose life is remembered this month (he died in June 597). He came from a line of kings who had ruled in Ireland for centuries and was himself in close succession to the throne.

He was raised by priests, and in time renounced his rank to become “a religious” (a friar). By his mid-20s he had founded several monasteries in Ireland, including the well-known Abbey at Kells.

Columcille was also a poet and it was this aspect of his calling that caused him to become embroiled in a controversy that resulted in a devastating turn of events for him. Historians differ on what happened. It is widely believed that he had copied a portion from the gospels, or possibly a psalm, from the rare single copy of the Scriptures on site at the abbey. Having copied it himself, he intended upon keeping it, whereas the King claimed it belonged to the Abbey from which it had been copied. The written word, in those days, was rare and treasured. In defense of his rights to it, Columcille found himself at the center of a war that broke out among the Irish clans in which thousands were slaughtered.

Filled with remorse after the bloodshed, Columcille underwent a profound change of heart and chose exile for himself from the land he so loved and that inspired his poet’s pen. He left Ireland and set sail with a dozen companions and landed on the island of Iona, off the coast of Scotland, where he founded an abbey. (He was far away from his beloved Ireland enough to be deemed an exile, but still able to see its coastline.) Iona, then and now, became the spiritual center for Celtic Christianity. One writer said, “Columcille himself penetrated the wildest glens of Scotland and the farther Outer Hebrides.”

In the late sixth century, he returned to his native Ireland to take part in the assembly of Druim-Cetta in Ulster. During the assembly, Columcille defended the rights of the Order of Bards (poets), whose legitimacy was under assault by the king. He claimed that the future of Gaelic culture demanded that the work of the bards be preserved. And so it has been.

Of the poets, Columcille wrote:

For you know that God himself bought three-fifties of Psalms of praise from King David . . . . And on that account it is right for you to buy poems of the poets and to keep the poets in Ireland.

As all the world is but a fable, it were well for you to buy a more enduring fable . . .

If poets’ verses be but fables

So be food and garments fables,

So is all the world a fable,

So is man of dust a fable.

Upon his death c.597, a cleric said in his eulogy:

He made a vigil of his life.

Short was his time

Everywhere a pillar of learning.

An authority in the strict book of the law

Light of the North

Who brightened the West

And inflamed the East,

3 Daily Prayers for the Spiritual...
Wake Up Call