Christmas: From Jesus’ Birth to Santa ~ But How?

Where Did “Christmas” Come From?

Christmas is typically associated with the birth of Jesus, a Jew born in Bethlehem over 2000 years ago. I think we can all agree that the way the holiday is celebrated today carries little resemblance to a barn with animals and hay for a bed. There is an interesting, if convoluted, evolution about this holiday that clearly departs from any logical association of the birth of Jesus and thus the term “Christmas” ought not to invoke outrage. It has as little to do with the actual birth of Jesus as does the term “Kleenex” with all known tissues everywhere used to wipe peoples’ noses.

Some experts in astronomy and other sciences have speculated that Jesus was not born in December, but  August, probably around 7 B.C. This conclusion is based upon an extraordinary conjunction of Jupiter and Saturn in the constellation of Pisces that took place same year. No one lied about “the star of Bethlehem.” The conjunction looked liked a blazing transient star in the sky. So those in attendance who documented the events conveyed the only science they knew. And as we all know, nature works in wondrous and miraculous ways.

So how then did Dec. 25 become the epicenter of the Christian holiday (the eight days of Hanukkah, notwithstanding)? And how, in God’s name, did the festivities become associated with a jolly fat man who flies around the world in a sleigh pulled by flying reindeer?

The first Santa Claus had his roots in the early Christian church. His name was Nicholas, bishop of Myra (an ancient city along the Mediterranean coast of what is now Turkey). Other than his living in the fourth century, very little is known about him historically, though oral tradition abounds.

Myra was a key port city where ships stopped on their way to and from Rome, Egypt, and Byzantium. Nicholas is said to have saved Myra from starvation by seizing grain off a ship bound for Byzantium. Because the stolen cargo was never missed it was counted as a miracle. Thus the bishop became the patron saint of sailors.

A second “miracle” associated with Nicholas set the stage for his becoming the inspiration behind Santa Claus. According to tradition, a poor family in Myra had three daughters who were being courted for marriage but who had no dowries. This doomed the girls to a life of shame and possible prostitution. The good bishop took it upon himself to supply their dowries, anonymously slipping bags of gold into their home–some say into stockings that were hanging up to dry. In securing their dowries–and so their right to marry–he rescued them from an otherwise degrading destiny. When Nicholas’s identity as the benefactor became known, so began the adulation of this gift-bearing saint. As a result, he also became the patron saint of children.

He died on December 6, A.D. 345 or 352, and was buried in a small church in Myra. But the story of what became of him after his death is almost more fantastic than the works he was said to have performed during his life.

In that day, the bodies of holy men were of immense value, for both religious and commercial reasons. So on May 9, 1087, sailors from the southern port city of Bari, Italy, raided Myra and stole Nicholas’s remains. The bishop’s bones remain in Bari to this day. The heist effectively transferred the mystery and magic of the oral tradition surrounding Nicholas from the East to the West. It was the first step in the transformation of the provincial bishop into the omniscient superstar.

It didn’t take long for the Westernized Nicholas stories to assume a place in each country’s individual context and tradition. In 16th-century Germany, for example, church Reformers banned celebration of the Feast of St. Nicholas on Dec. 6. Instead, they moved the date a few days after the winter solstice, when the days started to get longer. They sought to emphasize the Christ child, or Christkindlein, who, taking his cue from Nicholas, brought gifts to children on Christmas Eve. This figure evolved into “kristkingle” and eventually “Kriss Kringle,” who was more or less indistinguishable from the mythical Nicholas figure.

The Dutch tradition behind Sinterklaas is the most direct link to the modern American Santa Claus.

This mythical figure is supposed to have sailed from Spain with a Moorish helper named Black Peter and filled Dutch children’s shoes with nuts and candies. Sinterklaas had the uncanny ability to know about children’s good or bad behavior.

The Germans, the Dutch, and others brought their Nicholas traditions when they migrated to the New World. Once ensconced in the United States, the literary community embellished the myth and brought it to the levels it has assumed today. The American Santa was shaped most notably by Union Seminary professor Clement Clark Moore’s 1822 children’s poem “A Visit from St. Nicholas,” which begins with the legendary line: “‘Twas the night before Christmas . . . ” 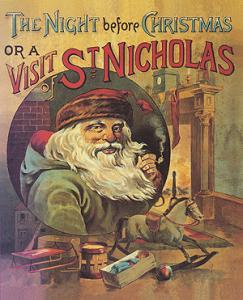 By the early 20th century, Santa appeared in department stores and mail-order houses that vied to be his “official headquarters.” Post offices were overrun with letters to Santa from children who addressed them to “the North Pole.”

The present-day Santa, in his most secular manifestation, is divorced from the spiritual moorings and motivation of the real-life Nicholas. But he still personifies goodness and a kind of justice, which might help explain the terror that arises in some children when they enter his presence. The evolution of the Nicholas story, beyond attesting to the American spirit of entrepreneurial innovation, bears out the overwhelming need people feel to believe in something and to celebrate something greater than themselves.

November 19, 2017
The Mayflower Compact, Harsh Though It Was, Helped the Struggling Pilgrims Survive
Next Post