Shortly after my (spontaneous) conversion at the age of 16, I went on a youth convention to Dallas, Texas called Explo 72,  where, for the first time, I heard Billy Graham speak. But more than that, it is where I learned that the enthusiasms of my newly-animated spiritual awakening would, in due course, be overtaken by the struggles of real life. Speaking to a crowd of 80,000 youth, like me, Graham lifted his Bible and proclaimed to the crowd, “It is not easy being a New Testament Christian.” Trials will come and that, he said, is when the true walk of faith begins. At the young age of 16, newly converted and “high on Jesus,” at that youth convention I learned a lesson I have never forgotten.

Those words changed everything I thought I knew about following Jesus as a young Jesus Freak. I was converted in the era of the Jesus Movement of the 1970s, so I thought being a 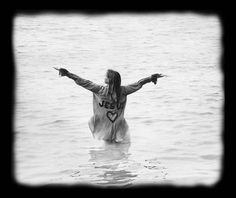 Christian would be “radical” — like being a hippie, but for Christ, you know, high on Jesus. We freaks would give the “one-way” hand gesture (index finger pointed skyward) instead of the ubiquitous peace sign.

No. I learned from Billy Graham that following Jesus would not, in the end, be about being a Jesus Freak. It was going to be hard, so let’s settle on that right up front.

Over these many decades, despite in time moving into the professional realm of writing and journalism; and despite, though this vocation, having had the opportunity to interview and write about many members of the Graham family (Franklin Graham here; Anne Graham Lotz here; Ruth Graham here); this simple statement from a young-ish Billy to an impressionable Jesus follower forever righted the ship of my faith journey. When I have encountered trials that tested the “radical” faith I blithely espoused in my youth, these few words, spoken at the early point of my Christian life, kept me from losing heart and giving up the faith. Billy Graham said it would be hard, I still hear myself say.

Because it was Billy Graham who said it, for all my days, I have believed it.

Several years ago, during those days of doing stories on the Grahams, I was interviewed by Kim Lawton of Religion & Ethics NewsWeekly about the legacy of Billy Graham and include that interview below.

February 16, 2018
Remembering Mister Rogers and the Light He Left
Next Post

March 12, 2018 What To Do When You Are Unceremoniously Insulted
Recent Comments
0 | Leave a Comment
Browse Our Archives
Related posts from Poets and Lunatics