Remembering Mister Rogers and the Light He Left

Fred “Mister” Rogers died 15 years ago this month. I always think of him in February as the dregs of winter cloak me in discouragement. Thoughts of him bring light and hope. I miss him and I dare say the world misses him. He was a light amid darkness and in his silent, subtle, mighty way, he rescued children — and grown-ups too — from a world that would warp souls.

I had the opportunity to spend a day with him shortly before he died and write a profile about him, and not simply about the wild popularity of his children’s program Mister Rogers’ Neighborhood, but specifically about his personal faith and the theology he brought to developing the show.

The assignment proved a highlight in my career. And, as time would have it, it was the last major feature article written about Fred Rogers before he died in February 2003. It was also the only feature article to peek into the spiritual side of the Neighborhood, to explore the belief system of Fred Rogers — who was an ordained minister — embraced it in his television visits and in his every-day life.

During my visit with him so many years ago  I sat with him in his “office,” a small, cramped, eclectic room in Pittsburgh that was a testimony to the people who have “loved him into existence” (his way of putting it). He sat on a well-worn couch and I in a velveteen chair, both from his childhood home of Latrobe, Pennsylvania. He had no desk. He was flanked by stuffed animals and baseball caps, and sometimes stuffed animals wearing baseball caps, that his many neighbors had given him over the years. He showed me a sign that he kept on the table near the door: Freddie, I like you just the way you are. “It was my Grandfather McFeely who said such things as that,” he said. “We used to visit him in the country almost every Sunday. He was the kind of person who would say, ‘You know, you’ve made this a special day by being here.'”

He called his viewers “neighbors” and, for him, the world was filled with neighbors. He called himself a neighbor. And his daily half-hour children’s program, called Mister Rogers’ Neighborhood, was his invitation for children and mothers to come to a safe place filled with quiet moments, like feeding the fish and the arrival of a dinging trolley.

Then he opened his wallet to show me pictures. “I love to know about people,” he says. The “tour through the wallet” included photographs of people he’d known, children of the people he’d known, and, in some instances, people he didn’t know but heard about and cared about:

“This is one of my special friends, Yo-Yo Ma, who is a cellist, and his son,” he said. “He’s a great man. Oh. This is Jonathan Kozol—he writes about children.” There was a picture of Mother Martha and “some of the kids in the Bronx”; a little boy from his church; and another boy with autism who was fixated on hangers. There is a picture of a woman whose husband “was sucked into coal slag and suffocated”; and there is a picture of her two children.

He told me that in seminary he studied systematic theology with Dr. William S. Orr and that “from then on I took everything he offered; it could have been underwater basket weaving.He was a great influence on many of our lives. Not just because he was brilliant. He was the kind of person who would go out on a winter’s day for lunch and come back without his overcoat.

“Every Sunday my wife and I used to go to the nursing home to visit him. One Sunday we had just sung ‘A Mighty Fortress Is Our God’ and I was full of this one verse. I said, ‘Dr. Orr, we just sang this hymn and I’ve got to ask you about part of it.

” ‘You know where it says—The prince of darkness grim, we tremble not for him. For, lo, his doom is sure . . . . one little word will fell him? Dr. Orr, what is that one thing that would wipe out evil?’

“He said, ‘Evil simply disintegrates in the presence of forgiveness. When you look with accusing eyes at your neighbor, that is what evil would want, because the more the Accuser’—which, of course, is the word Satan in Hebrew—’can spread the accusing spirit, the greater evil spreads.’ Dr. Orr said, ‘On the other hand, if you can look with the eyes of the Advocate on your neighbor, those are the eyes of Jesus.’ I’ve never forgotten that.”

“Life is deep and simple, and what our society gives us is shallow and complicated,” he says. At its worst television can be “degrading, reducing important human feelings to the status of caricature or trivia,” and even “encouraging pathology,” he says.

“Life isn’t cheap. It is the greatest mystery and we all only have one life to live on earth. Through television we can demean or cherish it.”

“I have seen in my life too many indications of what is wonderful about human beings. I think the Accuser would have us be so despairing that we wouldn’t do anything good at all. But you know the effect of one little candlelight in great darkness. That sounds simple, but it’s true. The older I get the more impressed I am with simplicity and silence.

“I do believe that that’s where we can be inspired. Whenever I give a speech now I give a minute of silence for people to think about all those who have helped them to become who they are. Invariably, that’s what people will remember—that silence.”

“When I think about heaven, it is a state in which we are so greatly loved that there is no fear and doubt and disillusionment and anxiety. It is where people really do look at you with those eyes of Jesus.

“The underlying message of the Neighborhood,” he said, “is that if somebody cares about you, it’s possible that you’ll care about others. ‘You are special, and so is your neighbor’—that part is essential: that you’re not the only special person in the world. The person you happen to be with at the moment is loved, too.

“God, in his great mercy, accepts us exactly as we are. Who could ever stand if God’s faithfulness did not endure?”

Before my day with Mister Rogers came to an end, I asked if I could take his picture. 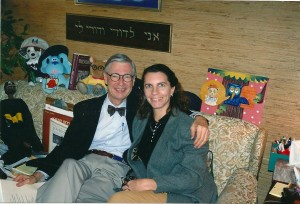 I sit on his couch—he wanted the illustration of X the Owl and Henrietta Pussycat in the background—and he took my picture. Then “Mr. McFeely” (David Newell) took our picture — Fred Rogers and me, together on his couch, X the Owl over our shoulders, sitting, smiling and safe,  together, as neighbors.

Almighty God, bestow upon us the meaning of words, the light of understanding, the nobility of diction, and the faith of the true nature. And grant that what we believe we may also speak.

Support me on Patreon: