Today is my 36th birthday, and unlike any previous birthday, I find myself beginning the new year in the middle of a tunnel I entered just prior to my 35th birthday. The year ushered in some pretty seismic changes in my life, mindset, and approach to the world.

This is my story – the end and the beginning.

Before 35, my evangelical Christian faith grew and morphed and changed skins at various points, but the essential foundation – trust that God existed and became human in Christ to save people from an unseen but active Enemy – remained steadfast. My loyalty to Christ was firm, even as my faith in the church and its various iterations wavered and waned.

Then came the crash.

I’d often wondered how God could love scum like me, but then spent five years unlearning a retributive wrath-filled theology, and replaced it with a Christus-Victor theology of a God who desperately loves God’s own and risked all to rescue us.

I’d often wondered how a God who loves us could create us with the wisdom to discern that Hitler was evil for having exterminated millions of innocent Jews, homosexuals, and their allies, but then expected us to abandon that wisdom in order to believe God is any better than Hitler, despite promising infinitely worse to infinitely more people for literal infinity by either creating some for hell or simply allowing many to go there. And, having made no sense of it biblically or intellectually, I abandoned the idea of Hell altogether, adopting instead a view of annihilationism underpinned by hopeful universalism.

I’d often wondered if and why, for example, God was punishing me for unconfessed, unrepented sins by robbing me of my uterus.

But in all of this, and so much more, I never doubted God’s Beingness.

Then one day last fall, I literally woke up one day without an anchor. Omran had just been lifted into an ambulance in Aleppo, Syria, and I watched, weeping along with millions across the world, as this sweet, innocent little boy wiped blood from his brow and observed the red on his hand in a state of total shock. In that moment, I found myself at a loss for how any god could ever allow such horrors. I found myself unwilling to pray, unwilling to steal any of any god’s attention from more critical matters across the globe. I found myself wondering why any god would entertain my prayers but ignore the plight of Omran and his friends. I found myself furious at the thought that any god would hear and answer my middle class American prayers while ignoring Omran’s screams. And I found myself wondering how any god, if it existed, could simultaneously see and know these things are happening and yet remain inactive. I could not return to the angry god who willfully punishes children, but I could neither see or accept a good god who’d remain inactive in the midst of such suffering.

Around that same time, I’d come to the bitter end of five years leading worship at a megachurch, which culminated in weeks of “Fake It Til You make It” performances. After each service, congregants – my audience – would inevitably thank me for “bringing the Spirit of God to this place,” while I left knowing I’d faked the whole thing and given them nothing but an emotionally provocative concert. And it dawned on me: If I can so easily deceive people into thinking this is a real spiritual experience and not just an emotionally manipulative concert, how many of my own “God moments” and spiritual experiences were manipulations of my or someone else’s making? Were any of them real?

Did God actually exist, or was this all a figment of a hyperemotional imagination?

On this, my 36th birthday, I still don’t know. On any given day I waffle between 40% and 60% belief/disbelief. I just don’t know. And that makes praying hard. It makes talking about a personal God hard – because God isn’t personal to me right now.

It might upset some people to know it doesn’t make talking about theology or ecclesiology difficult. If anything, this doubt and uncertainty make me all the more skeptical, cynical, and critical of the Christian religion and how it’s expressed in our culture. Having grown up with all the “plain and clear” answers right there on the holy pages has only intensified my disillusionment. Those answers are only potentially helpful if the foundational belief in a god is accepted as fact.

But even if it is, my goodness, Christians are doing this all wrong! If there’s a god, why is the Church so focused on getting to Heaven by converting the masses to this or that doctrine, rather than obeying Jesus’ command to Love one another, to serve the least of these, to humble ourselves to the service of others, and in all this to bring Heaven to Earth, to build the Kingdom of Heaven right here and now?

Thirty-Five brought me into community and solidarity with the non-religious, agnostic, and atheistic, whose disbelief in any kind of god or Afterlife drives them to create a better Now for our oppressed and marginalized neighbors, which has not only propelled me to do what I can to make Now livable and good for those around me, but also inflamed my fury at a religious community that seems utterly unmoved and unconcerned with both the historical and modern suffering of our next-door and global neighbors. It’s awakened me to the reality of how much the religious world contributes directly to that suffering by appealing to sacred texts to defend indefensibly cruel and inhumane injustices.

Thirty-five also brought me into fellowship with a community of Believers who may or may not agree about heaven and hell, but who do agree that as the hands and feet of Jesus, we have an opportunity and an obligation to bring the Kingdom of Heaven to earth. Thirty-six finds me serving with Black and LGBTQIA+ pastors and staff as office administrator and communications assistant at a Lutheran church devoted in word and deed to championing the cause of the vulnerable, making room at the table for all who believe, and making life beautiful for our community members.

I serve with people who not only know about but cherish my questions and doubts as sacred.

From the margins, as an agnostic but hopeful believer who now knows we can choose which kind of god we serve, it’s absurd that anyone would choose a violent one by whom billions of humans will be cast into eternal damnation, rather than the God of Love and Light who can and therefore will redeem all darkness and make all things right in the end. From the margins where an afterlife is a nice thing to hope for but nothing we can, by any logic or reason, count on, it strikes me as deeply irresponsible and lazy to focus attention on preparing for heaven rather than doing everything we can with every minute we have because nothing beyond this moment is ours. From these margins, it is life-giving to spend my days in community with people of all and no faiths who are less concerned about my doctrinal affirmations than they are with whether or not we are actively nurturing and producing good fruit in the community and world.

This is where I am on day 1 of my 37th year. These are the questions that confound but do not plague me, questions that make belief in a God or an afterlife feel absurd and ridiculous.

Even so. While what I call Americevangelical Churchianity and its language of Christianese enrage me like nothing else, the language of God, of Love, of a Cosmic Christ who enters into human suffering to demonstrate for us the divinity of fellowship – of “rejoicing with those who rejoice and mourning with those who mourn” – is a language to which my heart instinctively and reflexively responds.

I believe because I want to believe.

I believe because belief in a God is as absurd as the belief that the conversations I have with my husband are really happening and really do change me for the better, and yet I know they do.

I believe because I still experience moments of profound awe and unspeakable joy when listening to or making music, or when running through a canopied forest.

I believe because it saves me from the black hole of hopeless Nihilism.

I believe because we are inconceivably tiny specks in an unfathomable, immeasurable universe, and yet I’m here writing these things with letters and words, and there you are to understand and make sense of them, and either commiserate or judge me an apostate.

I believe because things like beauty and music don’t seem to have any evolutionary advantage to the bringer or receiver, except that they awaken us in and to our deepest, truest selves.

I believe because Jesus is beautiful, and His example is worth following, whether or not He is God.

I believe because belief is the only language I know, and through my deconstruction I’ve learned that this language can create as much good as it has created evil. While so much of white evangelicalism destroys lives and dehumanizes the beloved, there’s a stronger, more powerful cohort of Believers who see the Imago Dei most perfectly embodied in the marginalized, and who strive to be and bring the Kingdom of Heaven to earth by swinging wide the gate and making “access” to God and being part of God’s Beloved an inalienable human right injected into each of us when we were first imagined by God.

So this is where 37 begins: In the middle of deconstruction, disillusionment, and with a little sliver of hope to keep believing until I can’t anymore.

June 12, 2016
Mass Violence in America: This Is Who We Are and Choose To Be
Next Post 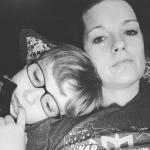 December 5, 2017 Who I Am and Choose To Be
Recent Comments
3 Comments | Leave a Comment
Browse Our Archives
get the latest from
Who We Choose To Be with Amy Courts
Sign up for our newsletter
POPULAR AT PATHEOS Progressive Christian
1