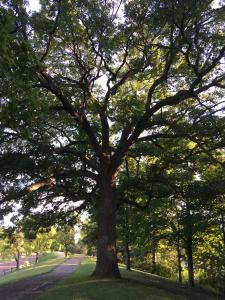 It’s a strange, even surreal thing to look back from where I am now to where I was exactly one year ago today when I wrote about landing in deconstructed unbelief on my 36th birthday.

This time last year, I didn’t know or believe much other than that I want God — whatever, whoever, wherever that is — to be real. Having readily (and not regrettably) abandoned the evangelical tyrant of my youth, shaking it off as dungful dust off my feet, I was content to sit in the question of what God could possibly look like if not an easily-offended authoritarian monster.

It’s funny, even, to go back to the morning of September 6, 2017 and recall our church’s pastoral intern Matt noting, after having read that piece, that I’d make a great seminary student. I laughed him off, it was too absurd.

And yet this morning that is precisely where I found myself: Sitting in seminary  reviewing Moses’s “call” in Exodus 3 when YHWH spoke to him through the burning bush, said They* were aware of and moved by Israel’s suffering and oppression, and told Moses to go liberate them.

I was asked for the thousandth time today to think about my own call to ministry, which I can’t really name or define yet.

I don’t even know what it means, to be “called,” and I’m not a big fan of using what feels like floofy, hyper-spiritual language to dress up the simple act of joining in the work of Christ to proclaim release to the captives and liberation to the oppressed.

But as we read Moses’s story, I was carried back to December 2016, just after I’d left the megachurch where I’d led worship in for five years, having found myself drowning in rage toward a god I was sure either didn’t exist or was an amoral, absentee asshole of a “heavenly father.”

In the midst of it all, I got a Facebook message from an old acquaintance’s husband with whom I’d almost never interacted, and who — given that my own husband didn’t yet know the gravity and depths of my total deconstruction, much less anyone in the public or social media spheres— could not have known where I was regarding faith, much less why. Up to that point, I myself wasn’t able to articulate the disillusionment and profound grief I was experiencing over the suffering in the world under the supposedly sovereign reign of an absent or at least silent god.

But this guy showed up in my DMs with what can only be named a prophetic message he felt compelled to deliver to a stranger:

“I felt really strongly to tell you what I heard the Lord saying about you to me.

I saw a picture of you weeping, literally sobbing, and I saw the eyes of our father resting intently on you. He said her tears matter, they aren’t tears of sympathy, but rather tears of compassion. He said that’s what moves heaven into action. He said you have been in a season of hope deferred, that place makes the heart sick. He said he’s moving behind the scenes to bring hope realized. I saw him give you a Purple Heart. I said what’s that for? He said “she’s a champion for the forgotten, the downtrodden, the abused, the neglected. Her tears have come before me as a fragrant aroma, and I can’t resist answering her because of the mercy she carries for the ones my church has left behind.”

Today be encouraged heaven has seen, heard, and is moving on your behalf. His burden isn’t a burden, his yoke(teaching) is light. I believe with all my heart answers are beginning to arrive before questions are asked. He loves you deeply.

I hope this isn’t too strange, but I felt him strongly nudge me to say this. I pray 3 John 1:2 over you, and your family today. Your effort is not in vain.”

To many of you dear readers, that probably sounds pretty vague and universal, like it could be spoken to anyone at any time and be made to have meaning if the hearer so desired.

But as I thought about Callings today, I came back to this message because it was so profoundly specific to where I was in those weeks, months, and years.

On this, my 37th birthday as I look to my 38th year and an entirely new life and vocation ahead of me, I’m inspired and in awe.

The Church is flawed beyond measure or definition, likely beyond remedy.

To this day I do not know whether or not there is a god.

But I believe that Jesus is Good News to the hurting, oppressed, and marginalized, and this Good News is not the promise of eternity in heaven after a lifetime of hell-on-earth but the promise of solidarity and connection and beloved belonging right now.

And that we — you and I — have the power of presence to create and become a supernatural kingdom of Beloved Community on this earth.

I believe in my bones that the Cosmic Christ, the Source of all being, is most awake and alive when we are with each other in the deep darkness.

That God is the God of the cross and the grave.

That the tomb is just as often a womb.

That God’s Godness is most fully expressed, embodied, and realized when we practice suffering with each other, depending on each other, and loving one another as we figure out how to love ourselves in a world that’s stripped us of dignity and worth.

I’m choosing to believe that my friend’s husband’s words didn’t come from nowhere. That they were, in the truest sense, Prophetic.

And I’m tethering myself to the promise that just as God saw and was moved by the suffering of the Israelites, so too is God moved by our suffering still.

So I’ll take off my shoes, I will listen, I will doubt, I will worry, and whenever or wherever I’m told to go for the sake of Liberation —

ps: This should also serve as a warning that you may be seeing more of my seminary papers posted as blogs in the coming months.

About Amy Courts
Amy is a wife, mom, seminarian, activist, and singer-songwriter who doesn't know much but that she loves you. You can read more about the author here.
Previous Post 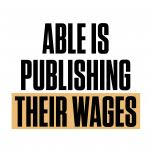 August 9, 2018
ABLE is Publishing Their Wages and Thinks Every Brand Should Do the Same
Next Post 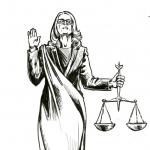 September 28, 2018 When My High School Boyfriend Attempted to Rape Me, I Blamed Myself
Recent Comments
1 Comment | Leave a Comment
Browse Our Archives
Related posts from Who We Choose To Be with Amy Courts