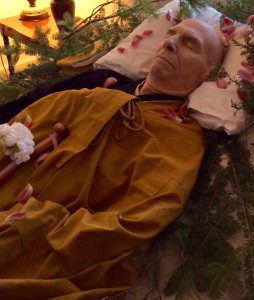 Zenshin was diagnosed with stage four lung cancer last August and since then has been nobly undertaking his departure in an upright and inspiring manner.

The last time Tetsugan and I visited Zenshin, he was lying comfortably in bed. He seemed so soft. “How are you?” I asked.

“Fading by degrees,” he said with a grin.

Zenshin practiced with Suzuki Roshi at San Francisco Zen Center and at Tassajara in the late 1960’s. He also trained with Harry Roberts, a Native American teacher. Zenshin completed a BA at Harvard and earned a PhD in anthropology from the University of Chicago. He taught at the University of Massachusetts and wrote ground-breaking works on the anthropology of menstruation and on the Yurok Indian way.

Zenshin had a full life as a spouse, father, academician, and sailor before returning to formal Zen practice. Zenshin was eventually priest ordained and received dharma transmission from Yozen Peter Schneider.

Tetsugan and I met Zenshin a few years ago when we first visited Maine and were considering a move here. We immediately found him to be a warm, wise, and supportive friend, who welcomed us to Maine with big open arms.

Just a month after we arrived in Maine, Zenshin received his diagnosis and so our plans to work together were cut short. Still, Zenshin served on the board of directors for Great Tides Zen and Tetsugan served on the Great River Zendo board.

Tetsugan and I enjoyed some wonderful times with Zenshin and his wife, Jorunn, visiting their camp, swapping old Zen stories, and just hanging out.

At a talk that Tetsugan and I gave in Portland before our move, Zenshin showed up with a van full of his students from West Bath. The topic of the talk was the koan about the woman who was separated from her spirit (“Who Is The True One?). During the dharma dialogue, Zenshin raised the issue of resolution – can resolution to separation be permanent?

I turned the question to him, and Zenshin said, “We can experience one heartbeat. And the next heartbeat…one heartbeat, ten thousand buddhas, no conflict, no gap.”

Yesterday afternoon, we joined with Zen priests John Bailes and Joan Amaral, and Zenshin’s student, Susan, to wash him, dress him in his priest robes, and begin the three-day zazen vigil with his body. We’ll be participating in the vigil as much as we can.

Details are being worked out for the cremation Sunday or Monday, and for the funeral in about forty-nine days.

Zenshin will be missed.

April 6, 2015
Restraining the Nevertheless Deluded One: Vine of Obstacles Turns Two
Next Post

May 9, 2015 Doug Kaishin Phillips Ordination
Recent Comments
0 | Leave a Comment
Browse Our Archives
get the latest from
Wild Fox Zen
Sign up for our newsletter
POPULAR AT PATHEOS Buddhist
1