Are You Listening To Me? 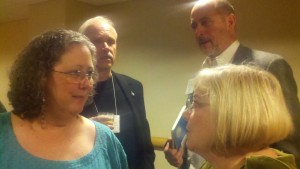 For many years I have been hired to conduct feasibility studies and community assessments. Without boring you with too much business jargon, I will simply say that 10% of such work is organization, appointments and report-writing, and 90% is listening. When you really, truly listen to people, in such a way that they know you are hearing them, they will tell you some remarkable things. Regardless of why a study is commissioned, each project has been a keen reminder that everything comes back down to personal issues, matters of the heart, living and dying and family and all of those things that we have in common with every person on the earth.

Being a chatty person, myself, this sort of listening required some new extraordinary discipline on my part. I learned not to react, not to indicate approval or disapproval, not to restate someone else’s words my way – all of this while making them feel that I was understanding, sympathetic and interested. Listening to people talk to me as if I shared their worldview on subjects about which I was passionate was a huge challenge. Once, I interviewed the brother of a former president who carefully explained to me why poor people do not really want a personal doctor or health insurance! But that interview was not the time for me to insist that he hear how I felt about the subject; I was being paid to do deep listening, then advise my client about whether and how to go forward.

Sometimes as Pagans we feel that we have been listening all our lives and that no one ever listens back. We are so tired of feeling misunderstood that we have stopped paying any attention to the words of those from other or no faiths. They don’t listen to us, anyway – right?

But magical things happen when people listen to each other. There was another time that a client convinced a woman to come let me interview her, even though they said she had written them off in anger years before. I insisted that those were the very people I needed to hear from, but I actually became frightened when she showed up for her appointment. This very incarnation of Margaret Hamilton without her charming caricature nearly broke a door on entering the building. If looks could kill, I would not have survived that meeting. Imagine my astonishment to learn a few weeks later that she had given a handsome five-figure contribution to the campaign. Time and again I experienced the positive results that came from simply listening and valuing the stories of others.

Kay Lindahl notes that we spend about 80% of our time communicating – 9% of that in writing, 16% reading, 30% speaking, and 45-50% listening. Yet our average attention span is only 22 seconds, and rarely do we remember more than about 10% of what someone tells us. She says that while we will spend considerable time preparing to make a presentation, rarely do we give a second thought to developing our listening skills.

Pagans and other non-mainstream religions have so much to share with the world, if only they would hear us. However, dialogue is only monologue unless it works both ways. We can open dialogue with others by listening, by caring for them even when we disagree with them. More often than not, we find that there is much on which we agree. Listening does not mean that we are giving up, or yielding our personal power, or agreeing with one word said. What it does mean is that we are willing to be changed, prepared to change our minds, even, depending on what we hear. The poise achieved in that willingness is more effective than the heaviest anchor. 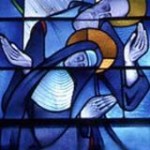 September 17, 2013 Atchison Blue: Peace, Humility, Poise
Recent Comments
0 | Leave a Comment
Browse Our Archives
get the latest from
Pagan
Sign up for our newsletter
POPULAR AT PATHEOS Pagan
1

Why Do So Many of Us...
John Beckett
Related posts from Wild Garden