Why Interfaith? Why Now??

Let us ask ourselves, why is interfaith work important?  Why should we bother trying to understand the religious and spiritual viewpoints of others?  Is it worth the struggle to find common ground when everyone else seems to cling to the idea that they possess the one truth about the nature of the Divine?  I believe it is not only important on a local level but also vital on a world level if we are ever to achieve a state of peace that holds out the promise of our very survival on this planet.

The fact of the matter is that for thousands of years it has been religious conflict that has spawned many of our wars and accounted for the deaths of millions of our fellow human beings.

The Crusades of the Middle Ages were explicitly a conflict between Christian Europe and the Muslim Middle East.  On November 27, 1095, Pope Urban II made  perhaps the most influential speech of the Middle Ages, giving rise to the Crusades by calling all Christians in Europe to war against Muslims in order to reclaim the Holy Land, with a cry of “Deus vult!” or “God wills it!” For seven hundred years the fighting continued in which not only combatants, but also thousands of innocent civilians were slaughtered, died of disease, or perished of starvation.

Over the centuries since the Crusades began we have had many wars based on religious intolerance.  Witness the pogroms of Russia and Hitler’s systematic extermination of the Jews.  Look at the ongoing struggle between Hindu and Muslim in India and Pakistan. Remember the bitter street fighting in Northern Ireland between Catholic and Protestant neighbors.

Today we are again engaged in warfare in the Middle East.  Prompted by the Al Qaeda attacks against the “Great Satan” of the West that culminated in the destruction of the World Trade Center, President Bush again called for a “Crusade” to destroy this enemy. While ostensibly limited to actions against Al Qaeda and those nations that offered it sanctuary, it became in large part a war on Islam in the minds of the American people. And while America mourns its young men and women who have died, who mourns for the thousands of Iraqi civilians caught up in the devastation of war? Who mourns for a country that has been torn apart by strife not of their making?

Certainly we often go to war for reasons other than religion, or at least in addition to religion.  We may justifiably go to war when our national survival is threatened. Or we go to war for land, for wealth, or for a barrel of oil.  But we like to justify our actions in the name of religion; in claims that “God wills it!”

Many important religious and world leaders are coming to realize that we need to move beyond a state of conflict amongst the world’s religions and find a common ground to end ongoing religious conflict. In a speech at St. John the Divine Cathedral in New York City in May 2010, the Dalai Lama stated; “Harmony among the major faiths has become an essential ingredient of peaceful coexistence in our world. From this perspective, mutual understanding among these traditions is not merely the business of religious believers – it matters for the welfare of humanity as a whole.“

The Dalai Lama is not the only one speaking to the necessity for interfaith understanding in order to bring about world peace.  Other voices speaking to this need include the following:

“Peace among religions is a precondition for world peace.” — Swami Agnivesh

“The force and the strength for peace will come from people. And that will happen when people start to realize that all the diversity and differences we see of nationalities, of religions, of cultures, of languages, are all beautiful diversities, for they are only on the surface. And deep down we share the same humanity, the global humanity.” — Satish Kumar

“If the ecological crisis, for example, is to be solved and if we are to promote genuine justice and thus bring real peace to the planet—and with it the possibility of improving lives on every level, not just economically, socially, and politically, but spiritually, psychologically, and intellectually—then, just on a practical level, we need to have all of the religions working together.” — Brother Wayne Teasdale

“We believe in taking down the barriers, but we also believe in the most energetic reconciliation among peoples by getting them to know each other, talk each other’s languages, understand each other’s fears and beliefs, getting to know each other physically, philosophically, and spiritually. It is much harder to kill your near neighbor than the thousands of unknown and hostile aliens at the other end of a nuclear missile. We have to create a world in which there are no unknown, hostile aliens at the other end of any missiles.” — Betty Williams (The Peace People)

So how do we advance the cause of religious tolerance and bring about the sort of understanding that will make religious wars a thing of the past?  I believe we must start at home.  Each of us needs to look deeply at our own prejudices and misapprehensions about other religions.  We need to accept that there are many truths, and yet all religions at heart cling to a simple belief. As the Dalai Lama put forward at an interfaith dialogue with students at the University of Portland in May 2013,”There are many different religions, but all share the principles of love, compassion, and forgiveness.”

We then need to educate ourselves and others on the beliefs of the world’s religions.  For only through true understanding of what they teach can we come to see who these peoples really are.  Where difference can breed fear and misunderstanding, familiarity can offer common ground on which to begin to form bonds of friendship and understanding.  Again, listen to the words of others:

“It is the duty of every cultured man or woman to read sympathetically the scriptures of the world. If we are to respect others’ religions as we would have them respect our own, a friendly study of the world’s religions is a sacred duty.” — Mohandas Gandhi

“I appreciate any organization or individual people who sincerely make an effort to promote harmony between humanity, and particularly harmony between the various religions. I consider it very sacred work and very important work.” – The Dalai Lama

“As believers we all have an opportunity and moral obligation to recognize our spiritual common ground; to rise above our differences; to combat prejudice and intolerance.” — Queen Noor of Jordan

Even more importantly we must be willing to take a stand in support of those men and women of good faith around the globe, regardless of their religion, who work to make this world a better place.  In the words of Thomas Jefferson, “I never will, by any word or act, bow to the shrine of intolerance or admit a right of inquiry into the religious opinions of others.”

As we enter the month of December we look at the many world religions that hold sacred observances during this month.  Can we not take the time this month to commit ourselves to creating an interfaith community that reaches beyond the limits of individual religions to acknowledge that despite our differences we are all member of one human race and precious in our diversity?  Can we not bring about one small step towards a future devoid of religious violence?  In the words of the song by Jill Jackson Miller and Sy Miller; 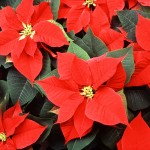 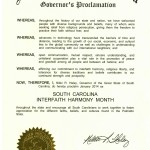 December 23, 2013 S.C. Interfaith Harmony Month
Recent Comments
0 | Leave a Comment
"I do not know how I have not seen this article before. Wonderful to read ..."
Donna Donovan Interfaith in Prison
"David - I am not totally sure if you are the same David who said ..."
T B Interfaith as a Pagan: Assumptions
"Wow - powerful story, Sage. Thank you."
Holli Emore Blood Feud
"On the subject of cutting things out of one's life without understanding how they are ..."
Sage Blackthorn Blood Feud
Browse Our Archives
get the latest from
Pagan
Sign up for our newsletter
POPULAR AT PATHEOS Pagan
1