Talking Our Way to Understanding 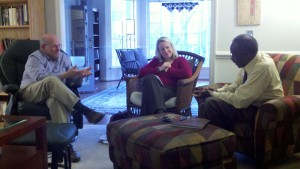 The living room dialogue went swimmingly.  We started by going around the circle, first person sharing with the person to their left something about their religion that they think is different from everyone else, second person reflecting back what they heard the first person say.  Then the second person turned to the third person in the circle, and so forth.  No big surprises or problems here.

Then I asked the group to think about the people who do not understand their religion, perhaps even fear it.  They were to repeat the first process by sharing what it is they feel frightens others about their faith.  This began to get real – at last!!!

We spent the last twenty minutes or so looking back at our articles and discussing points that stood out for us, as well as tying those points back to the exercises we had just done.  It was clear that we had crossed a new threshold.  People were more relaxed, but also more engaged, more excited about the conversation.  It was clear that everyone felt we had done some good work.

I was pleased because at last it seemed we were really acknowledging our differences rather than glossing them.  That acknowledgment must precede any true acceptance of differences.  And, by the way, when I say “acceptance of differences” I am not saying we have to agree.  I’m saying that we accept that people are different, but still valid as they are.  Once we get past that, we can start to learn from and even celebrate those differences, without feeling that we must embrace them as part of our own lives.

Next month I will visit a new spinoff group in a small town about an hour away.  I’ll be the token Pagan until we can recruit some local Pagan interest, but they are nice people and I don’t expect friction.  These are the “true believers” of interfaith, as my friend John calls them.  But perhaps if the true believers keep at it, the warmth of our activities will begin to leak out and thaw the more prevalent ice of religious bigotry.

November 9, 2014 What's Compassion Got to Do With It?
Recent Comments
0 | Leave a Comment
Browse Our Archives
get the latest from
Pagan
Sign up for our newsletter
POPULAR AT PATHEOS Pagan
1

Are Humans the Children of the...
John Beckett
Related posts from Wild Garden