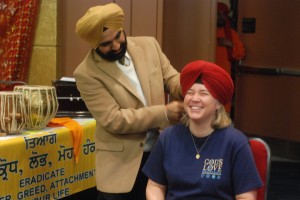 Taking a look back at religion in the news this year reinforces my commitment to interfaith work. The self-named Islamic State is definitely the most alarming source of a seemingly bottomless well of cruelty and violence. But religion-based conflict continues to span the globe, from kidnapped schoolgirls in Africa, to court battles with Hobby Lobby. Everything is not bad, but given the nature of media coverage, it’s easy to overlook the good news.

Speaking of Hobby Lobby, although I disagree with the outcome, I count my lucky stars and light a candle to Maat in gratitude that I live in a country where this issue was brought into the public judicial forum for scrutiny and discussion. Same thought applies to Town of Greece v. Galloway, as well as a number of other municipalities which struggled with whether and how to allow prayer before secular public meetings. And down in Alabama, Blake Kirk was blindsided by unexpected publicity around Huntsville City Council removing him from the agenda when he had been scheduled to give the opening invocation. (Blake did not seek publicity; a local reporter whose beat it is to cover those meetings broke the story.)  At Cherry Hill Seminary we were cheering for Blake and our newest graduate, his wife Carol, and got to talk about it all at our summer intensive which she attended. I greatly admire the peacemaking manner in which Blake and Carol responded to the controversy, both standing their ground and also seeking a solution which brought healing rather than more rage.

But still the violence rolls along. Anyone who is paying attention can tell you that unrest begins with being denied the basics of food, shelter, health, equal rights and self-determination. After that, it is easy for a death cult like the so-called Islamic State to impose its terrorist ethos on a society out of balance. One of my international friends has explained to me that much of the religious violence in his country is actually about class, not belief. When I was growing up, all the news was about Northern Ireland, bombings and killings between Protestants and Catholics.

Of course, religion is just the excuse that bullies use to justify their bad behavior. My Muslim friends are sick of being expected to explain that they are not like Islamist terrorists. My Christian friends are still reeling with shame from decades of confronting the institutionalized child and sex abuse, homophobia, racism and sexism of their churches. Pagan hands are just as soiled, as we have had to acknowledge when stories about Kenny Klein, Marian Zimmer Bradley and others emerged. I happen to agree with actor Morgan Freeman, who has been widely-quoted as saying, “There are no bad religions, only bad people.” I would add that there are no bad people, but there are people who act badly, and people who have become badly sick, sometimes irreversibly so.

What difference does interfaith involvement really make? Those of us who have been involved in the movement for LGBT rights for several decades well know the power of relationships in dissolving harmful ideology. The rule of thumb has been, “Come out when you can, as you are able,” because when people who already love and respect you discover you are gay, their prejudices will be shaken. That same principle operates among my interfaith colleagues. My friendships and interactions with people of many different religions have provided the nuanced setting for me to learn and gain insights I could never get from reading a book about world religions or taking a class.

There are additional reasons to jump into the interfaith pool. Because of my work here in South Carolina, I am no longer apprehensive about presenting myself publicly as a Pagan. As I’ve written in the past, my interfaith colleagues have my back. They have provided powerful context to my own continuing spiritual growth. And together, we are a coalition with a growing voice in the region. One of our own Wild Garden writers, Sunweaver, was instrumental in avoiding violence when her community exploded over a new mosque in town. It was the coalition of faith leaders from various quarters which helped soothe the frightening rhetoric, settling the town into acceptance, however grudging.

Do you want to help grow peace in the coming year? Just take a very small amount of your time to visit some other religious groups, attend an interfaith event or two, and make some friends who you might not ever meet if you just stay in your safe private circle. If you aren’t sure where to start, visit some of my other posts, here, here and here. 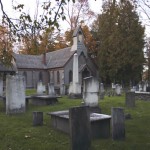 January 13, 2015 An End to a Faith-full Life
Recent Comments
0 | Leave a Comment
"I do not know how I have not seen this article before. Wonderful to read ..."
Donna Donovan Interfaith in Prison
"David - I am not totally sure if you are the same David who said ..."
T B Interfaith as a Pagan: Assumptions
"Wow - powerful story, Sage. Thank you."
Holli Emore Blood Feud
"On the subject of cutting things out of one's life without understanding how they are ..."
Sage Blackthorn Blood Feud
Browse Our Archives
Related posts from Wild Garden