(January 12, 2015) I’m on a cold, rainy drive back from the Washington, DC, area following the annual conference of the COMISS Network. It’s gloomy all up and down the East Coast today, but the warmth of the group I just left has left me smiling down the miles of I-95. Judy Harrow used to attend the COMISS meeting each year, and David Oringderff of Sacred Well Congregation has been a member for ten years. David is Chair of the Cherry Hill Seminary Department of Pastoral Care and Counseling. We also ran into some folks from at least two other Pagan groups in attendance, which was very nice. 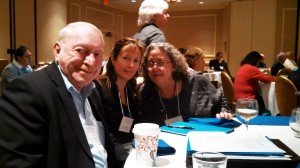 What truly warmed my heart, however, was the readiness with which several COMISS members stepped in to offer assistance and some solid professional referrals for Cherry Hill Seminary. They didn’t stop to ask about our theology or question why I was there. Obviously, David’s presence there for the past decade did much to pave the way. Nevertheless, I was struck by the feeling of camaraderie among most of the 60+ attendees. There were representatives from various healthcare chaplain services groups, the American Correctional Chaplains Association, the National Jewish Association of Chaplains, various denominations, a number of pastoral care and counseling groups, the Military Association of Atheists and Freethinkers, and some military and other chaplains.

I got the idea people genuinely value that Cherry Hill Seminary broadens the educational resources available for chaplains, and are eager to support our achievement of accreditation. They understand better than some just how essential accreditation is for our graduate students (not all CHS students are seeking a graduate degree, but that is our flagship program). I’ve come home with a satchel full of notes, ideas and contacts to follow up. 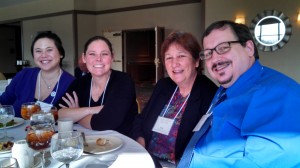 In case you missed the memo, make a note: it’s way past time for Pagans to step up to our place at the table. Most of those who might exclude us are not even at these tables, because their narrow-mindedness has already created a divide between them and their own coreligionists. Folks like those in COMISS are embracing us as peers if we demonstrate that we also respect their chosen path. Clearly, the Pagan world is rapidly changing, is currently somewhat amorphous and reshaping itself. But our human needs don’t change. We still need a hand now and then from someone skilled in spiritual support. As long as we have those very universal needs, contemporary Pagans will feel “called” to respond. I’m glad to know that I have a network of peers who don’t impose a belief test in order to stand with me.

Ritual Of Hekate During COVID-19 For...
Keeping Her Keys
Related posts from Wild Garden