Since the COVID-19 pandemic began, I’ve been rewatching all the old Star Trek shows on Netflix with my teenagers. Hiding out in the 24th century gives us hope for humanity. This got me thinking a lot about the Sci-Fi roots of my witching religion. Full-disclosure: I’ve been a huge Star Trek fan since my childhood. On Sundays my mother dragged us kids to hell-fire and brimstone church services, which terrified me. But on Friday nights my Papa and I communed in the holy temple of Gene Roddenberry, which inspired me. Thanks to him, my religion of Hermetic Witchcraft is heavily influenced by both science and science fiction. 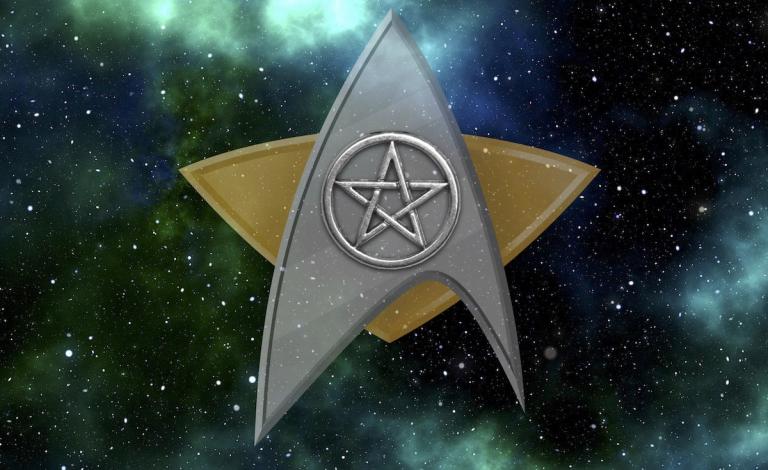 What would Captain Picard do?

My fandom started at age 13, when I came down with a wretched case of strep-throat and my mom made a sick-bed for me on the couch. By divine providence, at that same moment there was an Original Series 24-hour Trek-a-Thon on network TV. This was my very first binge of an entire show in order, pilot to finale, but with commercials and no remote control. Admittedly, I’m not the biggest fan of the Original Series, but the seeds of fascination were planted nonetheless.

Just after I started high school, Star Trek: The Next Generation (1987) debuted, and my Papa and I bonded over every episode. It was on Captain Jean-Luc Picard’s bridge of the Starship Enterprise that my adolescent spiritual yearning found safe haven. To this day, whenever I’m tasked to live up to my witching ideals in a moment of conflict, I ask myself, “What would Captain Picard do? WWCPD?”

TNG, Deep Space Nine, Voyager, Enterprise, and later Discovery and Picard continue to be my sanctuary, especially during these trying times of moral disintegration. Roddenberry’s Star Trek remains my favorite modern mythology about our human evolution. To my thinking, Star Trek envisions an outcome of the Alchemical Great Work of Magick. For centuries, occultists and magi of all stripes have engaged in the Great Work of evolving our society further towards golden enlightenment, one practitioner at a time.

Roddenberry’s shows in the 90’s presented a future without sexism, racism, discrimination, or poverty; where science is embraced, but spirituality can also find its natural place; where art, theater, music and ritual expression are as much encouraged as mathematics and engineering. It was on the Enterprise where I first heard the word “empath,” and saw a professional psychologist take very seriously the mental and emotional health of all people, including the children. As a child with both budding psychic abilities, and years of untreated depression, Counselor Deanna Troi was my first therapist by proxy. I still strive to be like her character when I grow up.

My parents surely didn’t realize they did this, but as I child I was presented two very different paradigm’s on which to build my ethical code of conduct: the Christian battlefield between good and evil, or the unity of Star Trek’s Federation and exploring new frontiers. The Christian church’s mythos taught me that every non-Christian (those who didn’t live, act and think exactly as they did ) were under the influence of evil.  Their Christian mission–their Prime Directive–was to “go unto all the world” to invade and vanquish that “evil,” to purge all alternative ideas or lifestyles, to colonize and homogenize. It was a patriarchal directive for spiritual violence.

On the other hand, Star Trek’s Federation had a mission to explore frontiers, to ask questions, to push the edges of the unknown, both within and without. They came in peace, as scientists, to discover new forms of life and ways of living, to exchange ideas, but not to interfere or impose. Star Trek’s Prime Directive was one of non-interference. Our intrepid explorers offered aid, protection, and mutual exchange through friendship. It was a matriarchal directive for cooperation. However, when bullies of the cosmos threatened life and liberty, Starfleet could defend their principles with well-aimed phasers, too. On stun, of course.

The 90’s Trek shows painted a glorious future where religious fanaticism could be understood in an anthropological context, as a quaint condition of a pre-enlightened society that would eventually be outgrown in favor of reason and logic. The spirituality of the 24th century could begin with asking questions, and was a personal striving for understanding and interconnection. By the closing scene of each episode, they would inevitably find it within themselves.

It was through Star Trek that I first really considered issues of one’s guiding ethics and principles within a pluralistic society. The ethics of Trek were focused on unity through our similarities, but also in exploration of our diversity. They built upon the strengths of distinction, honoring of boundaries, and forging alliances.

When the two paradigms (old battlefields or new frontiers) were placed side by side, unity was a far more appealing choice than violence, so I set out to find the earthly philosophies which mirrored the fictions of Star Trek. I found them in neo-paganism, quantum physics, and the Western Esoteric Philosophies of Occultism. Thus, my religion of Hermetic Witchcraft was forged.

A Witchcraft of Boldly Going

Thanks to my father’s Sci-Fi influences, I’ve chosen to live my life “boldly going” into the unknown frontiers as an explorer, in my case the spiritual and inner dimensions. Like Roddenberry’s vision of our potential future, I agree that the purpose of life is to improve ourselves, to progress into a more expansive awareness. We should behave compassionately and responsibly, while taking no shit from bullies.

How? Through relationship, team-work, generously sharing our strengths and resources, and an exchange of cultural wisdom. We uphold our principles even when it is difficult. We do the right thing, even if no one is keeping score, even if sometimes that defies orders, or challenges out-dated laws or social norms. Just like Starfleet Officers, witches are tasked to preserve the natural order, to defend life and liberty. We train for the diplomacy of the negotiation table, as well as how to flex both our defensive and offensive muscles effectively, depending on the situation.

Perhaps it is because of my love of Star Trek that science and spirit have never been at odds for me. Like the back-story of the fictional world created by Gene Roddenberry, witches do not deny our treacherous and violent past, especially in regards to religion. Hopefully, we won’t be fools enough to repeat that treachery.

My witching Prime Directive is to engage the world through the unity of perfect divine love which respects all beings, and the natural order of which we are a part. To take the responsible actions of perfect divine trustworthiness, endeavoring to do no harm as I pursue my sovereign life. Witches seek out diverse aspects of Spirit, and forge respectful alliances in all realms. We are builders, weaving the webs of mutual benefit.

I treat the other explorers of this cosmos as equally divine, and honor our distinctions. Most importantly, my witching mission is to never stop learning and improving myself. Based on what new things I learn along my travels, and can alter my course, and set a new heading. I can solve old problems with new ideas, and make it so. This is my Alchemical Great Work. By improving myself, and progressing within my sphere of influence, I aid in the advancement of society.

If we all applied these Star trek ideals to our political decisions, to how we vote, how we spend our money and our energies, I’d hope we could avoid the World War III annihilation of our planet also predicted in Roddenberry’s back-story.

I hope that we’d solve the problems of poverty, homelessness and hunger through progressive and generous community programs, rather than the fascism of a militarized police force. We’d invest in universally free access to top-quality education, nutrition, and healthcare, especially mental and emotional health care, for every single human. That systemic discrimination of any kind would be eradicated.

I hope that we’d invest in clean sources of energy, and correct the damage to our ecosystem. We’d stop the greedy hoarding of resources by the tiny minority of capitalist billionaires, and fix our global problems regardless of profitability or expense. We’re all earthlings after all. Earth is our starship, and I doubt any Federation of Planets will be swooping in to save us.

I could go on an on… but my point is that the dumpster fire currently burning in America could be solved using the example set by Trek. We could begin by electing the most intelligent and educated people among us. They would want to govern toward a progressive goal toward a more compassionate and beneficial society for all. Those officials would actually represent the will of the majority, and create policies based on the scientifically-supported and humane philosophies exemplified within Roddenberry’s Star Trek. I think that would entail an aggressive restructuring to be more socially democratic, which begins operating like a global community. Those were the changes alluded to throughout the franchise, but we need our psychic witches who do mediumship to evoke Gene’s spirit and ask him for the specifics of his dream!

I know that even if the Starship Enterprise were observing us right now from orbit, they’d never “beam me up,” no matter how much I begged for asylum from Earth’s self-imposed destruction. Humanity isn’t ready for the galactic big-leagues yet. First we have to save ourselves, save the planet, and level up on our own. To this end, I set my witching course along the Great Work of Magick, with a heading for societal evolution…engage!