Lent Success! (For My Kid, Not Me)

My daughter gave up chocolate for Lent.  This amazed me for many reasons:

When Ash Wednesday rolled around, she announced to the whole family that she wasn’t giving anything up for Lent.  We said nothing.  After all, it’s her decision and I grew up in a tradition that only practiced the “One Great Hour of Sharing” which involved getting your parents to stuff their spare change into a plastic bread shaped bank on Easter morning.

But soon after, she announced she was thinking of giving up chocolate.

“Cool,” I said, “Maybe you can pray ‘Jesus, help me want you more than chocolate’ every time you feel tempted.”

She rolled her eyes and I shut up.

One would think I, as her mother and spiritual guide, would have been wonderfully supportive of her fast, but I wasn’t, mostly because I kept forgetting she was fasting.  I’m so self-centered that if I’m not fasting from chocolate, I forget who else might be.  Since my language of love is feeding others, I constantly tempted her.  She’s had to remind me repeatedly when:

Several weeks in, I asked if she was praying the prayer each time she wanted chocolate.  “Sometimes,” she said.

Then last week, after I returned from a trip, she told me she had channeled me all week—giving wise friendly advice to her friends about their dating lives, and then after a very bad day, writing a venting angry letter to God.

“Did you hear God answer you?” I asked.

She laughed.  “But then things got better!”

Even though I’ve given my life to Jesus and dedicated my career to helping others know and follow Him, I still have moments of disbelieving He’s real and will show up for me, or more importantly, my kids.  There’s nothing more encouraging than when He does show up–and it seems like my job is to help my kids recognize those “God-sightings.”

So here we are, Maunday Thursday with 2 days left in Lent.  In 45 days, she’s cheated 3 times: once after Grandpa died; once when M & Ms were too tempting; and once at the track banquet.  She says she didn’t feel too bad since I had told her it was OK to cheat with discretion.

For the next two days, I’ll keep praying that resisting the power of chocolate throughout Lent creates room for my girl to receive the power of Easter this Sunday.  That God will continue to show up.  And that she’ll taste and see that He is good.

Along with a flourless chocolate hazelnut torte we’re baking to break the fast. 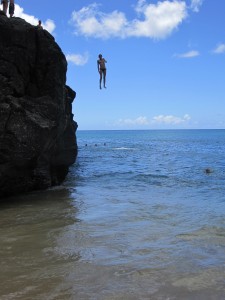