“Henry, how long did it take for you to get ready today?” I asked Ling’s prom date last night as I drove them to the picture taking gathering.

He snorted a little, “About 5 minutes.”

“That’s what I thought.”

Because as the mom of a senior girl, it didn’t take 5 minutes or even 5 hours, more like 5 days—5 full days of my life to get my girl ready for prom.

Last September Ling announced that she was going to prom whether she had a date or not.  “If I don’t have a date, I’m going stag.”

At my senior prom a gazillion years ago, a bunch of girls went stag and frankly had the most fun of any of us, so I thought that was a fine idea.  But it’s been clear that prom in her mind has been a far bigger deal than it was for me.   And a FAR bigger deal for her sister, who’s experimented with Ling’s hair and make-up regularly for weeks and even months now.

The fuss feels different.  Back in middle school, I stumbled on a book series written in the ‘50s about identical twins in high school—one sister vivacious and popular, the other bookwormish and shy.  But their top goals in life were to attract a handsome boyfriend, and their primary challenges were finding and paying for a different dress for each “formal” and hoping their boyfriends would buy orchids rather than carnations for their corsages.

Although already a budding feminist in 5th grade, I ate those books up, even though today I can’t remember either their titles or their author.  Great works of literature they were not.

Prom for my girls seems less about the guy and romance and all about the dress and friends.  And like almost all things I do in life, I was not on the ball with what’s involved.

So when we dress shopped in April, almost 2 whole months before prom, the saleslady said the prime shopping time was December or January.  “You should have seen the selection–now you’re stuck with what’s left.”

Given that there were hundreds of dresses in Ling’s size, I couldn’t fathom what a better selection looked like.

“But do girls even have a date by then?” I asked.  She shrugged.

Clearly the date’s negotiable, the dress isn’t. So we tried on many many dresses: 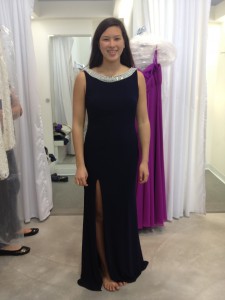 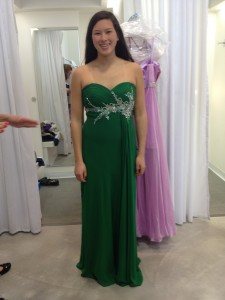 The girls in Ling’s class have a Facebook group where they’ve posted their dresses so no two dresses would be the same.  When someone felt another’s dress was too similar, there’s been more than one social media cat fight.

Ling had the good fortune that her friend Henry asked her to prom way back in January so she had a date but no dress. 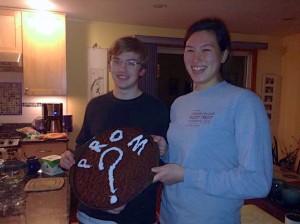 She shopped with friends and bought a dress that Scott took me aside and asked me to convince her not to wear (a mermaid dress that was completely formfitting to the knees—and beautiful), Ling and I went to the aforementioned prom dress store where no 2 dresses were alike in your size and every dress and high school’s written down so no duplicate dresses would show up at the same prom.

Yesterday morning, THE DAY OF THE PROM, we went shoe shopping.  A bit of a challenge since Ling’s very tall, Henry is not, and flat shoes in general are not very prom-like.  After trying on over 35 pairs, we left with these: 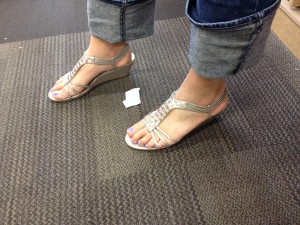 Then came the hair, courtesy of Kai: 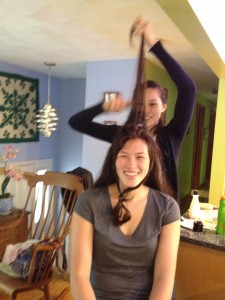 The make-up & nails, courtesy of me: 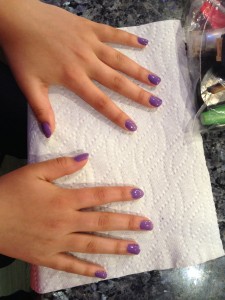 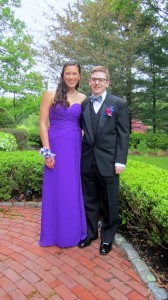 I’m so looking forward to 4 years from now when Ren has prom and it only takes 5 minutes.

May 21, 2014
Last Wednesday Night: Parenting in Calculus, Crisis and Noxious Gas
Next Post

June 2, 2014 Wisdom through the Ages: Family Advice for the High School Grad
Recent Comments
0 | Leave a Comment
"But the problem is people bash formula feeding saying thats not what babies are suppsed ..."
Carls Why Not Just Breastfeed in Private?
"I couldnt care.less how someone.feeds their kid...But you do know that breast are sexual right? ..."
Carls Why Not Just Breastfeed in Private?
"Oh my gosh, this had me cracking up. I love the part about Ren breaking ..."
Tara Edelschick Why I Never Wanted Pets but ..."
"I'm glad to find this! Mine all discovered RR this year and read obsessively (me ..."
SSH Rick Riordan I Love You
Browse Our Archives
get the latest from
Family
Sign up for our newsletter
POPULAR AT PATHEOS Family
1