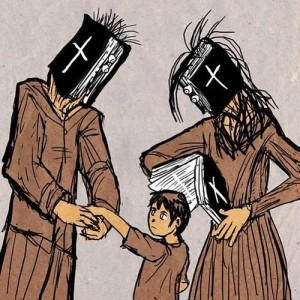 American Atheists posted this list to their facebook page, and I figured it needed all the amplification I could provide.

1. The discouragement of rational, critical thought.
2. Vilification of homosexuality, resulting in discrimination, parents disowning their children, murder, and suicide.
3. Women treated like second-class citizens based on religious teachings.
4. Children growing up to hate and fear science and scientists, because science disproves their parents’ religion – leading to appalling scientific illiteracy.
5. Tens of thousands tortured and killed as witches (a practice which still continues today).
6. People aren’t making the most of this life because of their belief in an afterlife.
7. People dying because they believe their faith makes them immune to snake venom, or other lethal aspects of reality.
8. People dying – and letting their children die – because their religion forbids accepting medical help.
9. People choked, starved, poisoned, or beaten to death during exorcisms.
10. Genital mutilation of babies endorsed by religious texts.
11. Psychological and physiological conditions blamed on demons, preventing believers from seeking medical care for themselves and their children.
12. People disowning family members for leaving their religion.
13. Friendships and romances severed or never started over religious differences.

14. “Abstinence-only” sex education, resulting in five times the amount sexually transmitted diseases and teenage pregnancies – often leading to ill-fated “emergency” marriages.
15. Women having septic abortions—or being forced to have unwanted children they resent—because religious organizations have gotten laws passed making abortion illegal or inaccessible.
16. Censorship (often destructive) of speech, art, books, music, films, poetry, songs and, if possible, thought.
17. The demonization of other religions, e.g. Christianity demonizing Pagans (“They’re devil-worshipers!”)
18. Children spending the period of their lives when the brain is most receptive to learning new information reading, rereading, and even memorizing religious texts.
19. People who believe the world is about to end neglect their education, are not financially responsible, and in extreme cases take part in mass suicides. 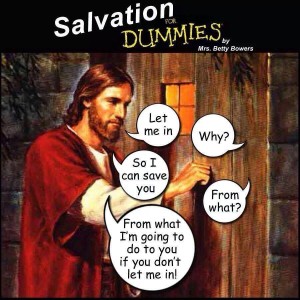 20. Long-term environmental issues ignored because of beliefs that the rapture/apocalypse or something will happen soon, so they don’t matter.

21. Wives told they will be tortured forever if they leave their abusive husbands (and vice versa).
22. Holy wars – followers of different faiths (or even the same faith) killing each other in the name of their (benevolent, loving and merciful) gods.
23. The destruction of great works of art considered to be pornographic/blasphemous, and the persecution of the artists.
24. Slavery condoned by religious texts.
25. Children traumatized by vivid stories of eternal burning and torture to ensure that they’ll be too frightened to even question religion.
26. Terminal patients in constant agony who would end their lives if they didn’t believe it would result in eternal torture.
27. School boards having to spend time and money and resources on the fight to have evolution taught in the schools.
28. Persecution of “heretics”/scientists, like Giordano Bruno (burned at the stake) and Galileo Galilei.
29. Blue laws forcing other businesses to stay closed or limit sales, while churches can generate more revenue.
30. Mayors, senators, and presidents voted into office not because they’re right for the job, but because of their religious beliefs.
31. Abuse of power, authority and trust by religious leaders (for financial gain or sexual abuse of followers and even children).

32. People accepting visual and auditory hallucinations unquestioningly as divine, sometimes with fatal results.
33. Discrimination against atheists, such as laws stating they may not hold public office or testify in court, or in half a dozen countries around the world, laws requiring their execution
34. Missionaries destroying/converting smaller, “heathen” religions and cultures.
35. Hardship compounded by the guilt required to reconcile the idea of a fair god with reality (“why is God punishing me? What have I done wrong? Don’t I have enough faith?”).
36. Human achievements—from skillful surgery to to emergency landings—attributed to gods instead of to the people actually responsible.
37. Mother Teresa, prolonging the agony of terminal patients and denying them pain relief, so she can offer their suffering as a gift to her god.
38. Tens of billions annually in the US alone spent to build, maintain, and staff houses of worship.
39. Grief and horror caused by the belief that dead friends and family members are tortured as punishment for disbelief.
40. Natural disasters and other tragedies used to claim God is displeased and present demands to avoid similar events (it’s like terrorism, but without having to plan or do anything).

Mostly religion, Christianity specifically, suppresses critical thought.  In essence, it makes people less intelligent by telling them that faith is just as good, or better, than arriving at a conclusion through deductive reasoning and evidence.  To me, that is Christianity’s most offensive crime.  It’s what causes otherwise good people to think cruelty or inequality are moral.

May 8, 2014 No blogs today.
Recent Comments
20 Comments | Leave a Comment
"Jesus is Lord. The fool has said in his heart 'there is no God." We ..."
Mark Frank Turek fears me. Also he ..."
"How about transgender kids being denied the right to play sports, and conservative Republicans banning ..."
Joann 40 harmful effects of Christianity.
"You seem moronic and infantile"
Christopher Mankey Frank Turek fears me. Also he ..."
"Don't You Lot tire of making this Same Accusation? Its just Dogma, something You deny ..."
skwills Thoughts on the soup kitchen that ..."
Browse Our Archives
Related posts from What Would JT Do?