Señor Santo Niño Comes To My Neck of the Woods

Señor Santo Niño Comes To My Neck of the Woods January 22, 2012 Frank Weathers 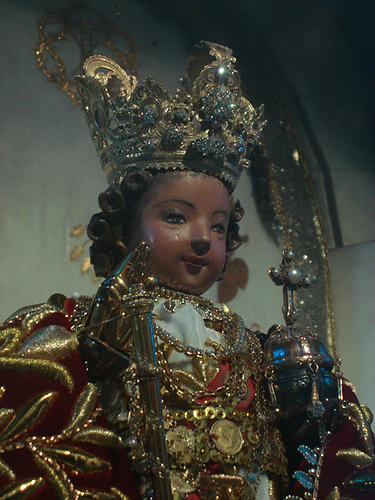 In the photograph above, you see the original Señor Santo Niño statue that Ferdinand Magellan gave to the Rajah Humabon and his wife Humamay when he arrived in Cebu in the Philippines. The Rajah and his wife, see, became Catholics and allies of Spain. Sure, there was intrigue and trickery, alliances and bloodshed along the way, and in the Philippines, Magellan would lose his life.

But Magellan brought the Faith to the Philippines in 1521, and the Rajah and his wife changed their names to  Carlos and Juana. On the 3rd Sunday in January, the feast celebrating this event is called Sinulog. Now I’ve been to the Philippines, but never to Cebu, and never at the time when this holiday is celebrated. Since 1980, or so, it has become a huge event, akin to the 4th of July rolled up in the Rose Bowl Parade. It looks like it would be a fantastic and unforgettable experience, comparable to what is celebrated in Malta on the Feast of the Shipwreck of St. Paul, or say the Carnival in Brazil rolled into four days instead of 46.

Yesterday, in fact, the celebration rolled into the little East Tennessee town of Cleveland. As members of the Philippine American Association of East Tennessee, we got in the car and headed an hour south so we could commemorate this special feast day with the Filipino community. I reckon ya’ll had no idea Filipinos were even in Tennessee, huh? Well they are, and some of them have the surname “Weathers.”

After celebrating Mass, we celebrated Sinulog, with Novena prayers to Señor Santo Niño, and a combined Filipino-Latino potluck in the gym of St. Thérèse of Lisieux Catholic Parish. The dinner was a gastronomic tour de force of Catholic hospitality. For example, there were two of these, 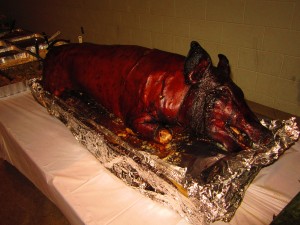 And plenty of side dishes, 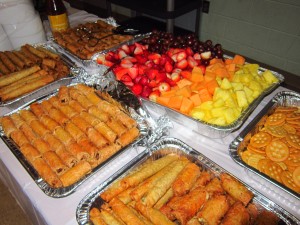 My wife took a little video of the Sinulog dance held in the gym. Check it out,

After that, they kicked the music up again and invited folks to dance along. How could I resist?

January 21, 2012
Tom Woods Endorses Ron Paul over Rick Santorum and says Catholics Should Too
Next Post

January 22, 2012 Would You Believe Because of Crony Capitalism? UPDATED
Recent Comments
0 | Leave a Comment
Browse Our Archives
get the latest from
Catholic
Sign up for our newsletter
POPULAR AT PATHEOS Catholic
1