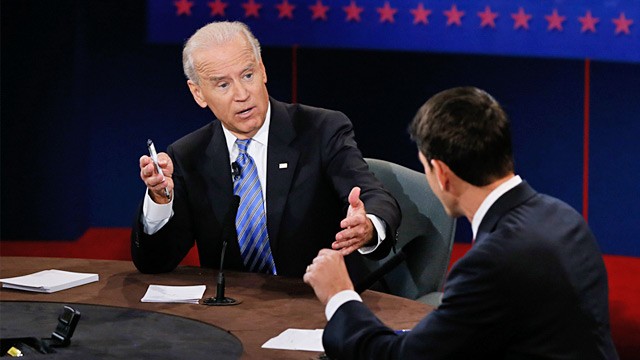 Here at Patheos, there are many different viewpoints from folks from many different faith traditions.  Timothy Dalrymple isn’t a Catholic, for example.  But one doesn’t need to be a Catholic to recognize cognitive dissonance of the magnitude that was displayed by Vice President Biden during the recent debate with candidate Paul Ryan.

Some of the liberal commentators who recognized that Biden came across as an angry and condescending thought that his finest moments were at the end, when he grew earnest and opined on his faith, abortion and religious freedom.  I thought those were his worst.

Here’s why.  While atheist mega-blogger Hemant Mehta celebrates him for it, Biden’s assertion that he accepts his church’s position that life begins at conception but refuses to “impose” that viewpoint on others is simply incoherent.  It’s like saying “I am firmly convinced that global climate change is near catastrophic levels, but I don’t believe I can impose that viewpoint on others.”  Or “I accept the position that homeless people are human and should not be killed, but I can’t ask others to live according to my beliefs.”

If you believe, as the Catholic church does, that a sacred human life begins at conception, you simply cannot do nothing.  What you are asserting (sacred human life begins at conception) is not a matter of subjective taste.  It’s an assertion of fact.  And if you are truly convinced of that fact, then there is nothing noble or tolerant or praiseworthy, or even remotely thoughtful or ethical, about standing by while those innocent human lives are extinguished.  Yet this is what passes for thoughtful piety on the Obama ticket.

Biden is saying: “I believe what the Catholic Church believes, that preborn children are sacred human lives — but I will simply stand by while anyone who wants to do so kills them.”  If he truly believes what the Catholic Church believes, then he has no right to do nothing in the face of thousands upon thousands upon thousands of abortions.  He has no right.  Either Biden does not really believe what he claims to believe, and he merely claims to believe it in order to draw as much of the Catholic vote as possible — or he is profoundly failing in his moral obligation to care for the children who are being aborted, because he finds it personally or politically convenient to raise no objection.

I don’t know which is worse.

Oh yes he does.  Because a failure like that isn’t a philosophical fragment, but a trip down a philosophical black hole.  How is a line of reasoning like this ever tenable?

Because you have to look no further than a couple of pages into the Catechism of the Catholic Church (CCC) to run smack dab into these words,

23     The Catechism emphasizes the exposition of doctrine. It seeks to help deepen understanding of faith. In this way it is oriented towards the maturing of that faith, its putting down roots in personal life, and its shining forth in personal conduct.

But maybe Mr. Biden’s personal views on abortion eclipsing his faith tradition’s view on abortion was just something the Vice President said during a debate. Maybe he didn’t mean that. Maybe what he meant was the exact opposite. Here’s what he said in Wisconsin the day after the debate to clarify things,

Funny that Mr. Biden should use the word “consequential” there at the end of the clip. Interesting also how contrary to his purported personal beliefs, which he holds are in full alignment with the Catholic Church, it seems that Mr. Biden’s actual personal beliefs are indeed the exact opposite of what he claims they are. How else to explain why he presented the scary future for supporters of abortion if President Obama loses this election?

Shifting gears for the rest of this post, I argue that when judging the candidates it behooves us to look beyond the personalities of the candidates themselves and perhaps look to the underlying beliefs of their political parties. Perhaps looking at the two dominant parties platforms would be worth doing.

I’m aware that this is a lot less fun than taking potshots at candidates, but it’s no less than what we do as Catholics when we say the deeds of those who abused children sexually, for example, are lightyears away from the tenets of our faith, which are spelled out in the Catechism.

It seems I’m not the only one to think of this.

By looking at the platforms, see, we’ll be less susceptible to the cults of personality effect that Rick Wilson of Ricochet reminds us of here,

When edifices – particularly political edifices built around the myth and personality of one man – collapse, they collapse suddenly. The center does not hold. The man dragged from the spider hole isn’t a dictator, he’s a prisoner. The Master of the Universe hedge fund manager who’s really just a Ponzi schemer gets booked at Rikers like the rest of ’em. The spell cast by power, once broken, is hard to restore.

Getting caught up in cults of personality leads so many of us, from all political persuasions, to plunge into the abyss of election season induced insanity.

Avoiding this quagmire may help prevent many of us from being exploited, as Sam Rocha warns us about here, and nip in the bud any proclivity to become an overly scrupulous voter, one who feels caught like a deer in the headlights between the rock and the hard place on the horns of an electoral moral dilemma.

October 14, 2012 Argo, See It! And Other Movie Stuff...
Recent Comments
0 | Leave a Comment
"Vaya con Dios, Leonard; Rest in Peace."
AnonCollie Leonard Nimoy Explains The Origin Of ..."
"Thank you for sharing"
Andy To Break My Fast from Being ..."
"I've seen Matt Maher live four times...twice since this song was released. I absolutely love ..."
Veritas81 WYD Flashback With Matt Maher, And ..."
"Yes, and Dolan should have corrected the scandalous and wrong decison of his predecessor when ..."
sixbunnies Archdiocese of New York Health Plan ..."
Browse Our Archives
Related posts from Why I Am Catholic