For This Hymn Commemorating the Baptism of Our Lord

For This Hymn Commemorating the Baptism of Our Lord January 13, 2013 Frank Weathers

On the Liturgical Calendar today, the Church celebrates the Feast of the Baptism of the Lord. Below is the conclusion of a three part kontakion written by Saint Romanus, the Melodist, in the 6th century. It was written and sung to commemorate this holy event.

Checking my handy encyclopedia, I find that a kontakion is a poetic homily, or sermon, consisting of 18 to 30 stanzas. The stanzas are chanted, and all follow the structural pattern set by the first model stanza. A refrain links all stanzas together. It is believed that a soloist sang the main stanzas, and the choir responded by singing the refrain. 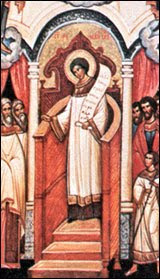 St. Romanus (pictured here)composed over a thousand kontakions and canticles in honor of holidays and saints for the various feast days of Our Savior and the Blessed Virgin Mary, and in honor of many saints. The Church has named him “the Melodist” and has acclaimed him as the best writer of sacred songs, not only for the wealth of ideas contained in them, but also for their poetry, depth of feeling and sublimity of language. St. Romanus, venerated by both the Roman Catholic and Eastern Orthodox Church, is also considered to be the patron saint of church choirs and singers.

Enjoy these verses comprising the words and thoughts that the writer ascribes to St. John the Baptist on this holy occasion.

Kontakion on the Theophany — the Baptism of Christ (conclusion)

After these dread words the offspring of Zachary cried to the Creator,
“I hesitate no longer, but do what you command me.”
Having said this, he approached the Savior as a slave his lord.
He gazed at him,
looking devoutly at the naked limbs of the one who orders
the clouds to envelop the heavens like a garment,
and again he contemplated in the midst of the streams
the one who appeared in the midst of the three youths,
dew in the fire and fire in the Jordan
shining, gushing,
the unapproachable Light.

But, seeing these wonders,
the son of the priest in the office of a priest
stretches out his palm and lays his hand on Christ
as he cries to those who see it, “See in the Jordan the willing rain.
Contemplate the torrent of delights, as it is written,
in the streams of the waters, a great sea in a river.
Let no one then consider me daring.
I act, not as foolhardy, but as a servant.
He is Lord and he told me to do this;
that is why I am baptizing
the unapproachable Light.”

“I was feeble as a mortal,
but he as God of all gave me power, crying,

`Place your hand on me and I will give it strength.’
For how could I have done it,
had this not been what he said and what came to pass?
How would I have had the power to baptize the deep,
I who am clay,
had I not first received and accepted power from on high?
For now, with his standing by me, I sense
that I am more than I was before.
I am something else.
I have been changed, I have been glorified,
for I am seeing, I am baptizing
the unapproachable Light.”

“I no longer say as before,
`I may not loose the strap of his sandals,’
for see, I advance from the feet to the head.
I tread no longer the earth but heaven itself,
for what I accomplish is of heaven.
Rather I have surpassed the things on high, for they carry,
but do not see whom they carry,
while I both see and baptize.
Heaven rejoice and earth be glad,
springs of waters be hallowed,
for by appearing he has filled all things with blessing,
he enlightens all mankind,
the unapproachable Light.”

At the divine command, Zachary’s offspring raises
his mind on high,
and stretching out his palm places it on the King,
washes in the streams, then leads back to land the Lord of land and sky,
whom the One who cried, “This is my beloved Son”
pointed out from heaven by a voice as by a finger.
To the Father himself, then, and to the Son
who was baptized and to his Spirit I cry,
“Crush those who afflict my soul;
end my errors, my Redeemer,
the unapproachable Light.”

January 12, 2013
Human Trafficking is Not Just a Third World Problem
Next Post

January 13, 2013 Hundreds of Thousands Protest In France over Same-Sex Marriage Proposals UPDATED
Recent Comments
0 | Leave a Comment
"Vaya con Dios, Leonard; Rest in Peace."
AnonCollie Leonard Nimoy Explains The Origin Of ..."
"Thank you for sharing"
Andy To Break My Fast from Being ..."
"I've seen Matt Maher live four times...twice since this song was released. I absolutely love ..."
Veritas81 WYD Flashback With Matt Maher, And ..."
"Yes, and Dolan should have corrected the scandalous and wrong decison of his predecessor when ..."
sixbunnies Archdiocese of New York Health Plan ..."
Browse Our Archives
get the latest from
Catholic
Sign up for our newsletter
POPULAR AT PATHEOS Catholic
1