Scientific Proof that The Blessed Virgin Mary is “Blessed for All Generations” UPDATED January 4, 2013 Frank Weathers

Joe Six-Pack here. You know, I’ve said it often in this space that Catholics can dig science. And I’ve written posts highlighting scientific events from time to time with the (Because Catholics Can Dig Science) title-ender. Is there such a word phrase as “title-ender?” I don’t know.  I think I just made that up.

But this post needs nothing of the sort, especially with the title above. What it does need is an explanation, and I promise to attempt to provide one which will back up my supposition, or theory, if you prefer to use that term.

The Blessed Virgin has been on my mind a lot lately, and namely because how can you celebrate Christmas without thinking of Christ’s Mother? I used to, before I was Catholic, but nowadays I think of Mary’s role as the God Bearer as comfortably as I breathe. And seeing how we just celebrated the Solemnity of Mary, Mother of God a few days ago, you’ll understand how the story I came across in Scientific American set me to thinking.

The article is titled, Scientists Discover Children’s Cells Living in Mothers’ Brains: The connection between mother and child is even deeper than thought. It is written by Robert Martone, “a research scientist with extensive experience in drug discovery for neurodegenerative diseases.”

I confess that first, I thought of my wife and children. I forwarded the article to my wife and said something to the effect of “what a magnificent creature you are!” Then I thought of my own mother, when BAM!, being the strange Catholic blogger whom you’ve come to know and endure (if not love, *cough*), I immediately thought of Jesus’s mother.

How could I not?

The link between a mother and child is profound, and new research suggests a physical connection even deeper than anyone thought. The profound psychological and physical bonds shared by the mother and her child begin during gestation when the mother is everything for the developing fetus, supplying warmth and sustenance, while her heartbeat provides a soothing constant rhythm. 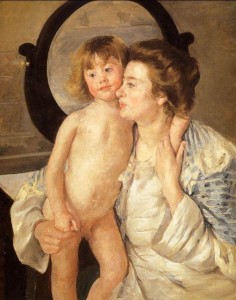 The physical connection between mother and fetus is provided by the placenta, an organ, built of cells from both the mother and fetus, which serves as a conduit for the exchange of nutrients, gasses, and wastes. Cells may migrate through the placenta between the mother and the fetus, taking up residence in many organs of the body including the lung, thyroid muscle, liver, heart, kidney and skin. These may have a broad range of impacts, from tissue repair and cancer prevention to sparking immune disorders.

Yes, right? We all know the first part of the above narrative to be true, but the amazing thing is the second part; the cells migrating part. Get ready for the part that set my brain on fire (emphasis is mine).

It is remarkable that it is so common for cells from one individual to integrate into the tissues of another distinct person. We are accustomed to thinking of ourselves as singular autonomous individuals, and these foreign cells seem to belie that notion, and suggest that most people carry remnants of other individuals. As remarkable as this may be, stunning results from a new study show that cells from other individuals are also found in the brain. In this study, male cells were found in the brains of women and had been living there, in some cases, for several decades. What impact they may have had is now only a guess, but this study revealed that these cells were less common in the brains of women who had Alzheimer’s disease, suggesting they may be related to the health of the brain.

If this is true, then, it means that the Virgin Mary had some of Jesus’s cells all throughout the tissues of her body, and in her brain too. The scientists among you should be intrigued, and the philosophers among you should be salivating by now. Jesus’s human cells were in Mary? From his human nature? Or from his divine nature? Or both?

Joe Six-Pack reckons the prudent philosopher would be conservative and say just cells from Christ’s human nature. But back to the story.

We all consider our bodies to be our own unique being, so the notion that we may harbor cells from other people in our bodies seems strange. Even stranger is the thought that, although we certainly consider our actions and decisions as originating in the activity of our own individual brains, cells from other individuals are living and functioning in that complex structure.

Amazing in and of itself, but especially when you happen to be the Mother of God. I mean, we Catholics know and understand how special Mary is, but if these findings are true, she is even more so, yes? Because if the study results are born out over time, see, we find something interesting.

However, the mixing of cells from genetically distinct individuals is not at all uncommon. This condition is called chimerism after the fire-breathing Chimera from Greek mythology, a creature that was part serpent part lion and part goat. Naturally occurring chimeras are far less ominous though, and include such creatures as the slime mold and corals.

Chimerism? I think I heard about this in discussions regarding conception, when life begins, and when the soul is formed. But that is a whole ‘nother category compared to this.

Microchimerism is the persistent presence of a few genetically distinct cells in an organism. This was first noticed in humans many years ago when cells containing the male “Y” chromosome were found circulating in the blood of women after pregnancy. Since these cells are genetically male, they could not have been the women’s own, but most likely came from their babies during gestation.

Many years ago? And I’m only just finding out? Qoheleth is right. There is nothing new, but I’m always the last one to know anything. What about “microchimerism, again?

In this new study, scientists observed that microchimeric cells are not only found circulating in the blood, they are also embedded in the brain. They examined the brains of deceased women for the presence of cells containing the male “Y” chromosome. They found such cells in more than 60 percent of the brains and in multiple brain regions. Since Alzheimer’s disease is more common in women who have had multiple pregnancies, they suspected that the number of fetal cells would be greater in women with AD compared to those who had no evidence for neurological disease. The results were precisely the opposite: there were fewer fetal-derived cells in women with Alzheimer’s. The reasons are unclear.

My mind was already blown by the thoughts of Dun Scotus on the Incarnation, and how that impacts the stature of the Blessed Virgin,  and now this?

Jesus = Son of God. Jesus = son of Mary. Mary = mother of Jesus. Mary = Mother of God. Jesus = the New Adam. Mary = The New Eve. Mary is Our Mother. Mary is Christs’ Mother. The God-Man’s cells are in His Mother,  Mary.

I’ll turn this stuff over to the real scientists, theologians, and philosophers now, and just go have a beer, with a smile on my face, thinking two things.  A) Science is cool, and B) all generations will called her Blessed (and for good reason). And, with a few minor lyric changes, this song makes all the sense in the world.

Hey Dolby, don’t give up on science just yet. Science and Faith are compatible, see? Just ask the Anchoress, as she knew long before I did.

Before we get too excited, C.S. Lewis has a few words about science and the faith worth remembering.

…we must be very cautious at snatching at any scientific theory which, for the moment, seems to be in our favor. We may mention such things; but we must mention them lightly and without claiming that they are more than ‘interesting.’ Sentences beginning ‘Science has proved’ should be avoided. If we try to base our apologetic on some recent development in science, we shall usually find that just as we have put the finishing touches to our argument science has changed its mind and quietly withdrawn the theory we have been using as our foundation stone.

The Anchoress: Assumption of Mary, Where Science and Theology are Met

January 5, 2013 Last Time I Checked the Hobby Lobby White House Petition...
Recent Comments
1 Comment | Leave a Comment
"Vaya con Dios, Leonard; Rest in Peace."
AnonCollie Leonard Nimoy Explains The Origin Of ..."
"Thank you for sharing"
Andy To Break My Fast from Being ..."
"I've seen Matt Maher live four times...twice since this song was released. I absolutely love ..."
Veritas81 WYD Flashback With Matt Maher, And ..."
"Yes, and Dolan should have corrected the scandalous and wrong decison of his predecessor when ..."
sixbunnies Archdiocese of New York Health Plan ..."
Browse Our Archives
get the latest from
Catholic
Sign up for our newsletter
POPULAR AT PATHEOS Catholic
1