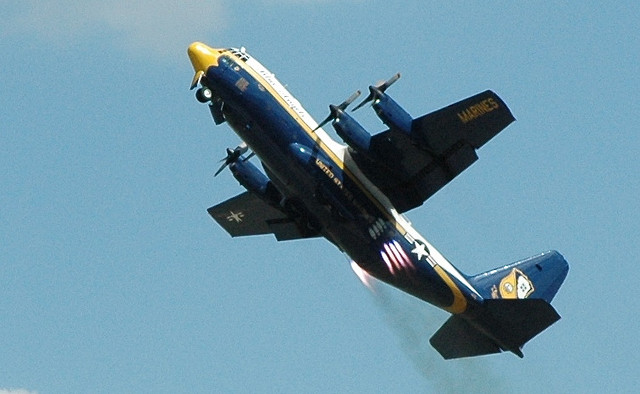 A 23:45 EST, the numbers show that 4,199 souls have signed it so far. Truth be told, that is a pretty fair showing, given that it has only been up for two days.

I didn’t write it, but I was the 6th person to sign it.  I’m just a passenger this time, instead of the pilot.

And though this bird seemed to rumble along the runway for forever, somebody pushed a button and she almost went vertical. It was like this,

There is still plenty of room aboard this bird, if you’d like to join us. You’d be amazed at how much fun it is to take an elevator ride on Fat Albert. Especially when the JATO (Jet Assisted Take Off) rockets kick in. But if the numbers keep adding up, we’ll be looking at more rocket-powered ships, to take us further, and faster.

Unlike last year, when we practically melted the servers in the White House, they’ve upgraded, and it’s as easy as pie to sign this petition. And you really should, because though the big news outlets were mum (except this one), the Hobby Lobby Appreciation Day was a success. Check out the link from Twitchy, and then see for yourself over at the Standing With Hobby Lobby Facebook page.

You will see that over 65,000 folks signed up to shop at the store today. Do you realize that if each one of them spent $20.00, they have helped the Green Family pay for one days worth of the fine they have incurred? Do the math and you will find that $1.3 million was added to the coffers, and hopefully more than that. But you can also see how large a strain the penalty will put on their bottom line. An extra 65,000 folks showing up spending $20 each probably isn’t in the cards, saavy?

So sign the petition to let the Administration know that this kind of cruel, and unusual, punishment of an employer is unconscionable. Then share it with your friends.

January 4, 2013
Scientific Proof that The Blessed Virgin Mary is "Blessed for All Generations" UPDATED
Next Post

January 8, 2013 To Season Well, Be Just Enough Yeast, And Not Blind Others (Living the Faith)
Recent Comments
0 | Leave a Comment
"Vaya con Dios, Leonard; Rest in Peace."
AnonCollie Leonard Nimoy Explains The Origin Of ..."
"Thank you for sharing"
Andy To Break My Fast from Being ..."
"I've seen Matt Maher live four times...twice since this song was released. I absolutely love ..."
Veritas81 WYD Flashback With Matt Maher, And ..."
"Yes, and Dolan should have corrected the scandalous and wrong decison of his predecessor when ..."
sixbunnies Archdiocese of New York Health Plan ..."
Browse Our Archives
Related posts from Why I Am Catholic