To Season Well, Be Just Enough Yeast, And Not Blind Others (Living the Faith)

To Season Well, Be Just Enough Yeast, And Not Blind Others (Living the Faith) January 8, 2013 Frank Weathers 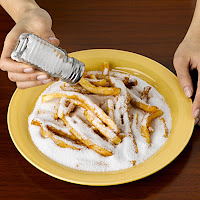 The other day, someone wrote me that the most dangerous idea they could imagine is a Christian living out their faith. They mentioned something about this being against “dependence on the spirit,” whatever that means.

To me, belief in Christ is not meant to either shape or re-shape our world view. Any view of the world is delusional.

Ideas like that are just another one of the endless reasons why I am Catholic. Dependence on the “spiritual?” Alone? God made us with both spirit and flesh. Going to the extremes of “dependence” on the one, or the other, is delusional. That’s not a teaching of the Catholic Church, nor is it something that you could possibly glean from the teachings of Christ.

How about an  example? Others more knowledgeable, and infinitely wiser than I, have said all that needs to be said about Our Lord’s words from the Sermon on the Mount. My pastor’s homilies are very good in this respect too, especially when they cover the passage about our roles as both salt and light.

As a refresher, here are the words of Our Lord,

You are the salt of the earth. But if salt loses its taste, with what can it be seasoned? It is no longer good for anything but to be thrown out and trampled underfoot.

You are the light of the world. A city set on a mountain cannot be hidden. Nor do they light a lamp and then put it under a bushel basket; it is set on a lampstand, where it gives light to all in the house. Just so, your light must shine before others, that they may see your good deeds and glorify your heavenly Father.

My pastor mentioned this signal truth about salt, which I knew but never connected to what it means for my practicing of the Christian life. Think about using salt in a recipe, okay? Basically, the critical thing about salt is, if there is too little salt,  the dish you are preparing will be bland. And if there is too much salt, it will be ruined too. That makes sense, doesn’t it?

Couple this idea on the practical use of salt with our behavior as witnesses for Christ and you can readily see that we can be too salty or not salty enough. We need to be “just right” in the saltiness department.

This idea of the quantity of salt we should be really applies well in our lives in this day and age. Though clearly the biggest risk is to not be salty enough, there is also the risk of being too salty, and therefore being like salt in wounds of our brethren, instead of being the seasoning that pleases. It is a tight rope, and I’m not saying I’ve got this application of salt down pat either. But I am thinking more about how to be the salt of the earth productively on a day to day basis.

Our Lord said in another parable, possibly the shortest one ever recorded, in a different setting that,

The kingdom of heaven is like yeast that a woman took and mixed with three measures of wheat flour until the whole batch was leavened. 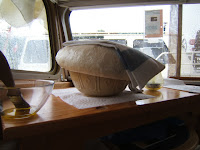 So in the yeast and salt department, I need to try to be “just enough” but not “too much.”

Moving on to the light department, the same thing is true. Yes, we are called to be the light of the world, but please don’t shine the light in my eyes, ok? If you’ve ever been camping, you’ve probably experienced the beneficial effects of having a flashlight once it gets dark. But if you flash it in your camping companions eyes, you’ll blind them, and be irritating.

Or driving around with your high beams on all the time while driving. Put like this, the metaphor has the same meaning, but the care in the use puts the onus on us to be light, but not blinding.

How do you know if you are just right in the salt, yeast, and light department? I may be the blind leading the blind here, but I would say that if you are sharing the joys of being a disciple of Christ, leaving others to wonder about the origin of that joyfulness and peace that you seem to possess (which is all gift, by the way), then you are probably on the right track in this area. 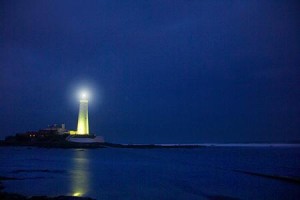 January 9, 2013 The National Cathedral to Perform Same-Sex Wedding Ceremonies UPDATED
Recent Comments
0 | Leave a Comment
"Vaya con Dios, Leonard; Rest in Peace."
AnonCollie Leonard Nimoy Explains The Origin Of ..."
"Thank you for sharing"
Andy To Break My Fast from Being ..."
"I've seen Matt Maher live four times...twice since this song was released. I absolutely love ..."
Veritas81 WYD Flashback With Matt Maher, And ..."
"Yes, and Dolan should have corrected the scandalous and wrong decison of his predecessor when ..."
sixbunnies Archdiocese of New York Health Plan ..."
Browse Our Archives
get the latest from
Catholic
Sign up for our newsletter
POPULAR AT PATHEOS Catholic
1